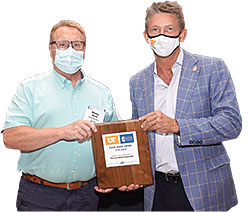 “We were notified that we won in three categories several weeks ago. We knew which categories we won but we did not know how we placed. Tennessee Press awards first, second, third, fourth and fifth place awards for each category,” said Wade. “I was thrilled to find out during the luncheon that we won a first place award and recognized as the best in the state.”

out a quality newspaper every week,” said Gibson County Publishing co-owners Scarlet Elliott and Victor Parkins. “Their hard work and dedication shows in winning these wards.”

“It is an honor for our newspaper to be recognized by receiving these three press awards,” General Manager Lee Ann Butler stated. “Our staff works hard week after week to put together a quality product for our community. I am proud of all we have accomplished.” 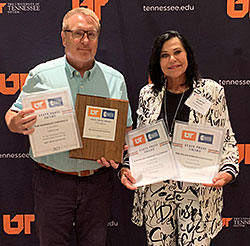 For Make Up and Appearance, one complete edition for each of the four quarters must be submitted. Editor Wade submitted March 10, April 7, September 29 and November 17, 2020 after conferring with General Manager Lee Ann Butler, Marketing Director Kim Forbes and former Associate Editor Mindy East.

In the Best News Reporting category, Wade submitted several articles on Tyson Foods locating in Gibson County. Articles written on the hatchery, crane sightings at construction sites in and around Humboldt, massive amounts of rain delaying construction of the processing plant, a tragic accident of a construction worker and the 1.5 million gallon water tower going up.

“Tyson coming to Humboldt and Gibson County has been the biggest news for the past few years,” Wade noted. “We covered every aspect of the journey.”

Best Single Editorial had two entries. One was on the sudden death of Chronicle sports writer/photographer Stephen Russell. The other editorial was on the cancellation of the Strawberry Festival, which was entitled, “What might have been”.

“Both of these editorial were easy to write even though they were about tragic events,” Wade acknowledged. “Losing Stephen was hard on the entire staff. It was so sudden. Canceling the Strawberry Festival was a hard, but right, decision to make. Both of my editorials were sad but also uplifting. I’m very proud of both.”

The Humboldt Chronicle has won multiple awards over the years but has had a dry spell as to winning a first place award. The last first place awards were in 2008 for Best Special Section (Strawberry Festival Preview) and for Best Public Service (covering education).