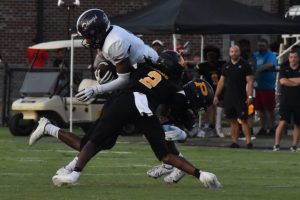 With 1:57 remaining, Peabody’s Khalik Ganaway rushed for a 51-yard touchdown to put Milan away for the 35-25 victory.

This was the fifth straight season that the Golden Tide (1-0) has beaten Milan, and it was Peabody’s 38th straight victory, which is the longest active streak in the state.

Moments earlier, Milan had the chance to take the lead when Milan’s Hayden Sullivan was stopped six inches short of the end zone on 4th-and-goal at the 2-yard line.

Peabody’s Khalik Ganaway rushed the ball 22 times for 194 yards and two touchdowns. Jason Baskerville had a 94-yard kickoff return for a touchdown, and Khalik Ganaway ran another kickoff back 76 yards to the five-yard line to set up another touchdown.

The Golden Tide held a 28-12 lead at halftime, but Milan scored 13 unanswered points to turn the game around.

Milan’s Mekhi Carr scored from 42 yards out for the first touchdown of the third quarter, and Trey Spinks caught a 13-yard pass from Sullivan for the other.

Sullivan went 12-for-22 for 142 yards and two touchdowns, while also rushing for 74 yards. Carr rushed for 164 yards and one touchdown on 15 carries. Kameron Tharpe had five catches for 74 yards.

Both teams will be at home in Week 2 as Milan hosts Manassas and Peabody hosts Westview.

After scoring 24 points in the first half, South Gibson’s defense held on to send the Hornets to an opening win over Lexington.

South Gibson scored twice in the first two minutes to jump out to a 14-0 lead. Senior Brannon Brown scored on the first play from scrimmage with a 12-yard run, and senior Ty Schrotberger scored on a 31-yard run.

Jase Stallings hit a 23-yard field and Ross Tegene Grenshaw scored from 14 yards out to give the Hornets a 24-7 lead at halftime.

Momentum swung to Lexington in the second half as Isiah McClaine capped off a 14-play drive with a four yard touchdown, and Deandre Treadway scored from 29 yards out to cut the Hornets’ lead to 24-21 with 10:39 to play.

But South Gibson’s defense held Lexington on 4th-and-17 and allowed the clock to run out with the Tigers’ driving to the South Gibson 38-yard line to secure the win.

After keeping the game tied at halftime (20-20), Obion County scored 14 unanswered points to open the season with a win over Gibson County.

This is Obion County’s second straight season to beat Gibson County in the season opener.

Gibson County matched the Rebels in scoring in the first half. John Carter Phillips opened the scoring with a two-yard touchdown. Phillips followed that with a 30-yard touchdown pass to Reese McVay. Colton Lumpkins scored the final touchdown on a 60-yard run.

With a 68-yard fumble recovery for a touchdown at the final buzzer, West Carroll’s Seth Edwards gave the War Eagles a three-game winning streak over Carroll County rival Bruceton.

West Carroll’s Xander Moon opened the scoring with a 36-yard touchdown run to put the War Eagles up 6-0.

Bruceton scored the next two touchdowns to take a 12-6 lead, but a 10-yard touchdown pass from Moon to Daelon Drasal tied the game up at 12-12.

Moon threw for 46 yards and rushed for 76 yards, while Jay Long led the War Eagles in rushing with 98 yards.

Franklin Grace scored four unanswered touchdowns in the middle of the game to turn a 10-8 lead into a 38-8 lead en route to a win over the visiting Vikings.

Jaboris Walker scored on a 70-yard touchdown run to cut Grace’s lead to 10-8 in the first quarter, but the Vikings didn’t score again until the fourth quarter. Walker threw touchdown passes of 30 yards and 28 yards in the final period.

Walker finished 10-of-18 for 193 yards with two touchdowns and one interception, and he rushed for 97 yards and another score. Mike Jones led Humboldt in rushing with 118 yards on 14 rushes with a long of 54.