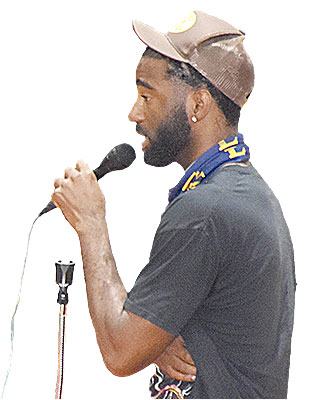 Humboldt has sometimes been called “the boat that don’t float.” That is far from what they saw last Tuesday when the high school students were graced with greatness from former standout Desonta Bradford. What Bradford thought to be a pep talk for a few athletes, turned out to be pep talk for the entire school.

“I was in the same place as they were,” said Bradford, a 2014 graduate of Humboldt High School. “I wanted to hear from other successful people.”

He walked into the gymnasium at the Humboldt Jr./Sr. High School where students sat waiting with anticipation to hear what he had to say.  Bradford stood behind a podium and told the students, “No matter what you go through in life, you must always do your best.” He talked about his life experiences since graduating high school.

Bradford has had many successes in a short period of time. In 2013, he helped to lead the mighty Vikings to a Class A State Championship and claimed the title of Mr. Basketball.

After graduation, he entered the collegiate world and played basketball at East Tennessee State University. As a freshman, he averaged 4.1 points a game.

Bradford was determined to practice what he preached and that was to always do his best. By the time he became a senior at ETSU, he was averaging 15.5 points, 5.8 rebounds and 3.5 assists per game. He was the leader in the league and was awarded the Malcolm U. PittSo Con Player of the year by the league’s coaches. Malcolm Pitt was an American coach who produced great results in basketball and baseball. He served as the college athletics administrator at The University of Richmond.

After graduating from ETSU, Bradford was in the NBA draft in 2018 but with a broken hand, he was not able to continue the quest to fulfill his dream to play professional basketball in the NBA.

That broken hand may have temporarily halted that dream, but it certainly did not stop his persistence. After recovery, Bradford signed with the Hungarian team Egis Kormend and later the Phoenix Brussels, a Belgian team. These are pro-basketball leagues over seas.

He has experienced a piece of the pie in coaching in 2020 and was named the assistant coach for player development at his collegiate alma mater, ETSU. Since coaching, he has returned back to the court and will be playing his first year with Tronta, an Italian pro-basketball team. He recently scored 30 points in one game and looks forward to having a fulfilling season.

When he stopped by to chat with the Humboldt Chronicle, Bradford continued to empower others. Anthony Jones, a 2019, graduate of HHS joined him and was able to reflect, listen and jump into the conversation. Jones currently attends Walter State Community College in Morristown, Tenn. and he is also a very promising athlete. In high school, Jones was known as “Dunkman Ant” and definitely lived up to that name. He is majoring in biology with the hopes of continuing his basketball career, but when that time of playing is no more, he plans to teach school. 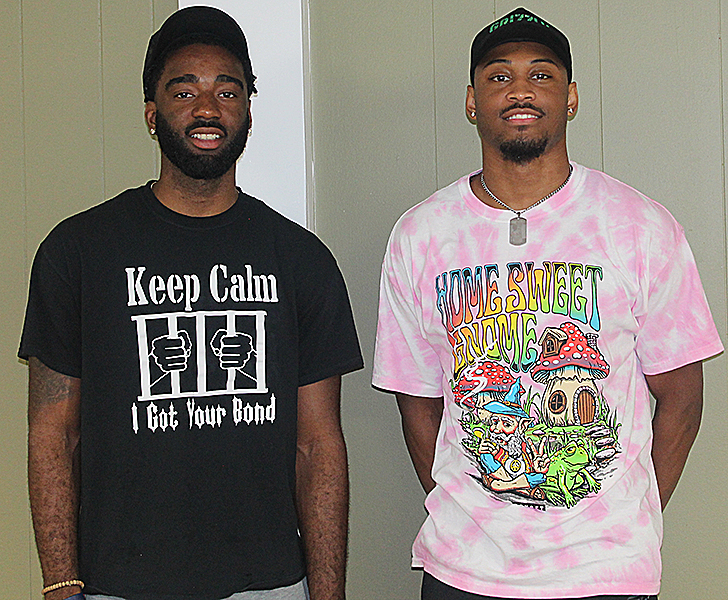 Jones and Bradford were happy to see each other and carried on like they were the best of friends. They talked about the love of the game and explained their experiences on the court. One would have thought they played together.

One of the most admirable qualities about these two young men was they knew the importance of lifting each other up. Bradford turned to Jones and poured out words of wisdom.

“Always be willing to learn and ask questions,” Bradford said. “No matter what, be respectful and find the right group of people to follow. Everyone is not a leader.”

Jones had encouraging words for Bradford, “You have done well in your accomplishments. Remember, you are your own person, and stay on your grind.”

Bradford realizes playing ball is not a forever job and plans to work in finance if he is not coaching the game he loves.