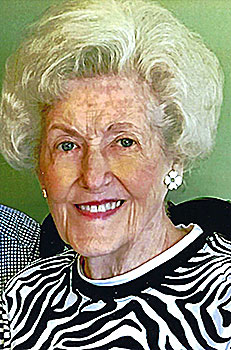 Martha Graves Bodkin, 93, of Sandy Springs, Ga. went home to be with Jesus on July 26, 2021. She was raised one of seven children to the late Willie and Martha Graves on a farm near Humboldt, Tenn.

She graduated from Humboldt High School and Draughons Business College in Memphis Tenn. Mrs. Bodkin served as Miss Humboldt of 1946.

Mrs. Bodkin married her childhood sweetheart, Hobart Bodkin in 1947. After his Air Force service, they moved to Atlanta, Ga. Her secretary employment supported them while he attended Georgia Tech. They met in first grade of school and have known each other for 88 years.

Her simple but fulfilling life had many rewarding chapters. Mrs. Bodkin was a devoted Christian, wife, mother, grandmother, great-grandmother and friend. She served Peachtree Christian Church in Atlanta as a deacon, elder, evangelism chairperson, Women’s Council president and Partners Class pianist for 27 years. She later joined Sandy Springs United Methodist Church where she was an active member and a superb adult Sunday school teacher for the Joy class. She also served as a homecare volunteer for Hospice Atlanta for 25 years. She enjoyed traveling to 49 US states, Europe, China and Australia.

In lieu of flowers, donations may be made in her memory to Hospice Atlanta, 5775 Glenridge Dr. NE, Atlanta, GA 30328.