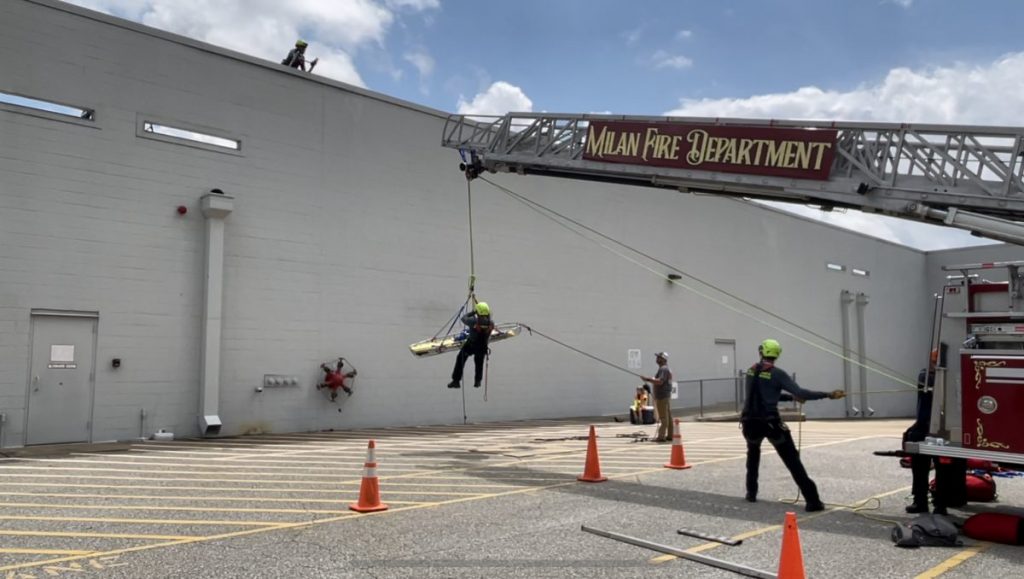 PREPARING FOR DISASTER – The Milan Special Operations team runs rescue drills on the roof of the Milan Walmart. The training is helping the team qualify for assisting in FEMA emergencies. Photo by Caleb Revill.

A roofer at the Milan Walmart has a heart attack on top of the roof. There is no easy, accessible way to get to them, and time is running out.

-Luckily, this is just a scenario that the Milan Fire Department Special Operations Team held drills for at the Milan Walmart Tuesday afternoon. Thankfully, it’s one they’re still accounting for.

Milan Special Operations is led by Fire Department Lieutenant John Gallimore. He and several other Special Operations members brought the fire trucks out behind Walmart and began running drills earlier that morning. Cody Criss was one of those members.

“We’re going to simulate someone in cardiac arrest (on the roof),” Criss said. “One of our team members is actually going to ride down with the patient and do CPR on the way down.

The team first used a fire truck ladder to get on top of the building, then used a rope pulley system and stretcher to bring the simulated heart attack victim down along with someone doing CPR on them.

“He’s unresponsive,” Gallimore said. “Think about it. How are you going to get him off that roof? He can’t walk, and you can’t carry him. You can’t throw him off over the side. So specialized equipment is needed to do this, and if we didn’t have it, we’d have to call for it. If that was your family up there, you don’t want to wait for somebody in Jackson to get here to do it.”

The training is equally as important as the equipment. This type of training is done once a month, monthly. The team’s six members are certified as rope technicians, swift water rescue, structural collapse and more.

“We’re trying to get approved by FEMA to have an actual deployable team,” Criss said. “For example, we could be deployed for the hotel in Miami that just collapsed or any kind of natural disaster recognition from the president.”

Gallimore spoke about the team’s goal of being a FEMA Type 4 Management Team. 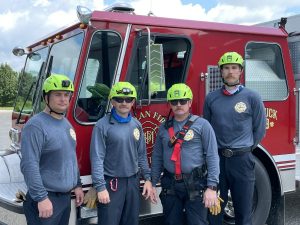 “You have to go through the Tennessee Emergency Management Association to do it,” Gallimore said. “If they say we need a search team, we would go to a structural collapse, just like what’s in Miami, and we would deploy there to do that. They would call Milan, and they’d ask for us to go help search, or whatever they would need us for.”

Gallimore said that with the training and equipment that the team is using today, the team would then be qualified to assist where needed.

The team has a trailer full of equipment for technical and HAZMAT rescue. Chemical, Biological, Radiological, Nuclear and Explosives (CBRNE) District 9 is labeled on the side of the trailer. This was established after 9/11 with federal grant money to help pay for it.

“Rope rescue is like the beginning,” Gallimore said. “What makes it special operations is anything that’s beyond the scope that any normal person of the fire department can do. It’s usually below grade, above grade, people stuck in something or a HAZMAT call. Do you know how many chemicals are in (Walmart)? If something was to happen in there, we have the suits and respirators to go in there safely and get somebody out. If we didn’t have that stuff on that trailer, then we couldn’t do that. We’d just be standing out here with everybody else.”

For the last couple of years, the Milan Special Operations team has been taking classes for rescue training.

“We’re just adding on to that,” Criss said. “We would be like most US&R (Urban Search and Rescue Teams). Tennessee has Task Force 1, which is the most deployed team in the whole country because they go to so many hurricanes. We wouldn’t be anything like Task Force 1, but if we got deployed we would pick a discipline.”

Criss said that the Milan Special Operations team would try to choose technical search as its discipline.

“Technical search uses electronic scopes (for rubble), and they get in there and crawl through it looking for people,” Criss said. “Then rescue teams come and lift the rubble off of them. It’s a giant operation, and we would just be a little, tiny piece of it.”

Criss spoke a little bit about the team’s scenario today.

“We’re starting a fresh scenario,” Criss said. “We just pulled up, so we have to find a manager to get to the key to go up there. It’s different, because we do train at the station, but we don’t train that much out in the city. At the station it’s a controlled environment, so we’re just learning how to hook up the systems and refreshing on the skill, but we’re not challenged by stuff out of our control.”

Gallimore reiterated the purpose of the training.

“This is for the citizen’s of Milan right here,” Gallimore said. “We don’t get extra for this. This is something we see a need for and our chief sees a need for. He allows us to get this training … not a lot of places will do that.”

Gallimore thanked Milan Fire Department Chief Steven Dillard for and Mayor B.W. Beasley for their support of the program and assistance with grants. Criss added that for most disasters, response preparation is key.

“We’re preparing for something that doesn’t happen very often, but if it does, it’s better to be able to handle it,” Criss said.