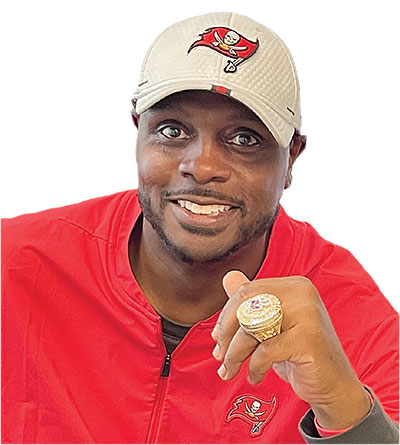 A NICE RING TO IT – Humboldt’s own Kacy Rodgers shows off his newest bling, donning his Super Bowl ring. Last week, the Tampa Buccaneers received their gold and diamond winning rings as well as visiting the White House. Rodgers is the defensive line coach for the Bucs, who won Super Bowl LV last February. 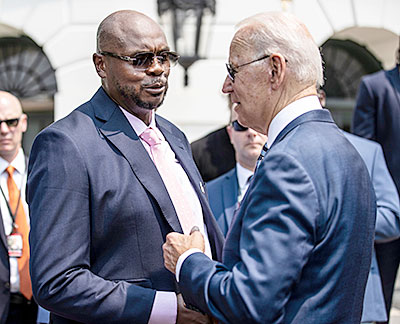 On Tuesday, July 20, Rodgers and the Bucs were at the White House where President Joe Biden personally congratulated each member of the team, coaching staff and others within the organization. Rodgers said it was a day he will never forget.

According to a press release of the Super Bowl ring celebration, the Tampa Bay Buccaneers players, coaches and staff received their Super Bowl LV championship rings at a special ceremony on Thursday, July 22, which was held at the MIDFLORIDA Credit Union Amphitheater. The ring design was the result of a collaborative effort between Buccaneers’ players and team leadership, and incorporates a twist-off top – the first of its kind in the NFL. Removing the top reveals a stunning hand-engraved, three-dimensional replica of Raymond James Stadium, in honor of the team’s historic win on its home field.

“We knew that this ring had to be completely unique and representative of the special journey this team took to the championship,” said Buccaneers co-owner Darcie Glazer Kassewitz. “We wanted it to represent the camaraderie and sacrifice that our players and coaches experienced along the way. This ring tells the story of that journey, it reflects the heart and soul of a team like none other before it. We know it will be an emotional touchstone for everyone involved for many, many years to come.”

The Buccaneers’ Super Bowl LV rings tell the story of the team’s unforgettable 2020 season by incorporating the most relevant accomplishments into the design details.  Containing 15 carats of white diamonds and 14-karat yellow and white gold, the top of the ring features 319 diamonds. On the top are two Lombardi Trophies – representing the franchise’s two Super Bowl Championships – and the team’s signature flag logo, carved from a red stone. The 319 diamonds represent the 31-9 final score in Tampa Bay’s Super Bowl LV victory. 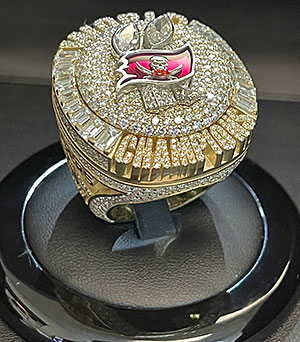 The Lombardi Trophy on the left represents the team’s most recent Super Bowl Championship and features nine diamonds to represent the nine points allowed by the Buccaneers in Super Bowl LV. The two trophies and flag are surrounded by round diamonds. At the top and bottom of the design are the words “World Champions,” which are diamond encrusted. Those two words are connected by eight diamonds on each side, representing the franchise-record eight-game winning streak to end the season.

The ring’s signature feature is the innovative twist-off top, the first for any Super Bowl ring. On the bottom of the removal top, laser-etched in gold, is the word “HISTORIC” alongside a description of the team’s accomplishment as the first to win the Super Bowl on its home field.

When removed, the top reveals the handcrafted replica of Raymond James Stadium. On the gold field is a single diamond, placed by the tunnel where Buccaneers players entered during Super Bowl LV. Around the top of the stadium on each of the four sides are displays of the four game scores from Tampa Bay’s postseason run – victories against the Washington Football Team, New Orleans Saints, Green Bay Packers and Kansas City Chiefs.

The left and right bands feature two distinct panels: one customized for the player and the other focused on the team. The player panel displays each individual’s name, the NFL logo and the team’s motto, “One Team, One Cause.” The team side features the Buccaneers logo and the Super Bowl LV logo, flanked by the score of the game, with 2020 – representing the season – listed below. There are four diamonds on the Super Bowl Trophy, which represent the team’s four playoff wins.  The final feature is found inside the band, where the phrase “Trust, Loyalty, Respect” is inscribed.

Buccaneers team captains and veteran leaders were involved in the design of the ring, offering input and feedback throughout the process.

“One Team, One Cause was more than a locker room mantra. It is a commitment amongst the players, coaches, and the entire organization to the pursuit of excellence on and off the field,” said Glazer Kassewitz. “It was imperative to our family that the players have a voice in the design to ensure it was a fitting symbol of their accomplishments and incredible achievements during one of our most memorable seasons ever.”

Rodgers signed a football scholarship with the University of Tennessee. Kacy was redshirted in 1987. He was a four-year letterman from 1988 through 1991 and an honorable mention All Southeastern Conference selection. Rodgers earned defensive starts in three different seasons as a Volunteer under Coach Johnny Majors. As a linebacker and defensive end, he contributed to Volunteer teams that won two consecutive SEC Championships in 1990 and 1991 and played in three New Year’s Day bowl games. The Vols beat Arkansas in the 1990 Cotton Bowl, beat Virginia in the 1991 Sugar Bowl, and lost to Penn State in the 1992 Fiesta Bowl. In 1989, the Volunteers posted an 11-1 record and finished the year ranked fifth in the nation.

Rodgers and the Bucs are already gearing up for the upcoming NFL season. Training camp began last week. Tampa Bay kicks off the pre-season by visiting the 6-time Super Bowl winner Pittsburgh Steelers on August 14. Rodgers signed with the Steelers as an undrafted free agent in 1992. The Buc’s first regular season game will be their home opener against the Dallas Cowboys, which was Rodgers’ first coaching job in the NFL.