Milan High School has hired a new band director, and his name is Davey Edmaiston.

A native of Troy, Tennessee, Edmaiston was a graduate of Obion County Central High School. He earned his bachelor’s degree in music and music education at Austin Peay State University. There, he would meet his wife, Rachel -a native from Milan.

Before coming to Milan, Edmaiston was the band director at Smith County High School in Carthage, Tennessee.

“We just slowly started moving east,” Edmaiston said. “She got a job at Trousdale County, and I got the (director of bands) job at Smith County High School. I’ve been there for four years, and I’m ready and glad to be back home”

Edmaiston spoke about when he first realized he wanted to be involved in music education.

“I was in high school, and we were playing a piece called ‘An American Elegy,’” Edmaiston said. “We were playing it, and it was the first time that I had a piece of music that made me feel emotions. I realized then that music could have an impact on people and move people. After playing that piece I realized that this is what I wanted to do with my life.” 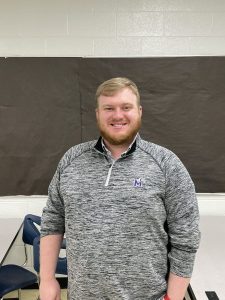 A NEW VISION – Milan High School’s new band director Davey Edmaiston has a new vision for the MHS music program that includes new uniforms, increased community involvement and playing for a wider variety of sports. Edmaiston, a fan of rock and roll, would also like to create a rock band for MHS students to participate in. Photo by Caleb Revill.

“An American Elegy” was composed in memory of those who lost their lives in the 1999 Columbine Shooting.

“To this day, it’s one of those pieces that I can’t go through without getting emotional,” Edmaiston said. “That was the first time in high school that I thought ‘wow, music can have a lot of power behind it.’”

Edmaiston said that his “fantastic” band director at Obion County, Jon Kerr, helped mentor him in this endeavor to pursue music education.

“He helped me do the things that I could do to be more involved in music education,” Edmaiston said.

Edmaiston spoke on his vision for Milan’s band program.

“We’re going to grow, big time,” Edmaiston said. “I want to get the community back together and push the band. One of the things I did in Smith County was really try getting the community behind the band.”

Edmaiston suggested doing more outdoor concerts at the amphitheater at the city park to get the community involved. He also commented on wanting to create a “new image” for the band.

“We’re looking at doing new uniforms and making the kids feel like they’re part of the school and as important as every other sport,” Edmaiston said. “And not just sticking to football, I’d like us to get more involved with baseball and soccer too. I want to try to go to as many sports as possible and support the bulldogs at every instance. If there’s someone on the field, we want to try to be there and try to support them.”

Edmaiston also hinted at bringing a rock band to Milan High School’s music program -something he did as director of bands at Smith County.

What does Edmaiston want most for Milan and the community to know about him?

“I’m here to work,” Edmaiston said. “I’m ready to get started, I’m ready to have Milan be the best band it can be and for the students to be successful in anything that they do … I’m excited to be back home, to take the Milan band to new heights and to participate with the Rose Bowl.”

The man behind the Mass Band plan