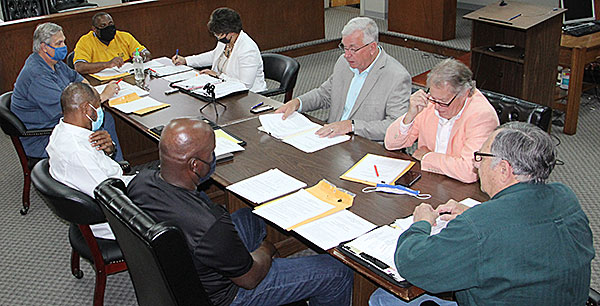 Humboldt aldermen made quick work of the city board agenda last week. Although the meeting went rather quickly, that did not mean there were not some big decisions to be made.

Prior to the Monday evening meeting at 5:15 p.m., Mayor Marvin Sikes and the board held a public hearing at 5 p.m. for an ordinance to rezone property. None of the aldermen attended the public hearing and Mayor Sikes said no citizens spoke or had concerns regarding the ordinance.

By the time the regular board meeting began, all five aldermen were in attendance.

The first order of business was the second reading of Ordinance 2020-16, an ordinance to rezone a portion of the interior of the Gibson County Industrial Park, approximately 20 acres, from B-2 general business to M-1, light industrial.

Just weeks ago, the board approved an ordinance to rezone this same property from M-1 to B-2, which would allow commercial development. At the time, there was no particular company looking to locate there but interest of development in adjacent commercial property looked promising.

Shortly after the board approved both readings of the ordinance to rezone, the city and Humboldt Chamber of Commerce were approached by the Fisher Project, who are interested in the property for development.

Monday night, the board voted to approve the second reading of the rezoning ordinance, which basically reverses the first rezoning back to its original zoning classification, M-1.

Another ordinance was presented during the city board meeting. Ordinance 2021-17 would adopt the updated Humboldt Utilities sewer use ordinance and enforcement response plan. Mayor Sikes explained this merely updating the current plan that had typographical errors and clarifies language, which came down from the Tennessee Department of Environmental Conservation.

Humboldt Utilities General Manager Alex Smith attended the meeting to answer any question the board might have concerning the updates. Smith said the changes are very minor and all changes had been pre-approved by the state.

Board member Leon McNeal asked if this plan replaces the old plan.

Mayor Sikes said it does replace the old response plan.

Smith noted the old plan was approved by the city board in 2013. He noted the state changed some of the numbering, which had to be updated.

The board unanimously approved the first reading of the ordinance. A second reading will take place during the next scheduled Humboldt City Board meeting.

•In the boards’ packets, Humboldt Police Chief Reynard Buchanan submitted a revised version of the police department’s “use of force” policy. In Buchanan’s letter to the board, he stated the board was given a copy of the policy last summer. In December, Chief Buchanan said the Tennessee Association of Chiefs of Police encouraged police departments to change some of the language.

Assistant Chief Dan Ables spoke to city board members about the changes. Ables noted Governor Bill Lee and President Donald Trump came down with new ideas and changes regarding the use of force. Most of these changes were already standard procedures with HPD.

Alderman Don Graves asked Ables how police deal with someone who is non-compliant.

Ables replied that police deescalate the situation first, which is best not only for the police but for the person involved. Ables added that police use the least amount of force to get the job done safely. He praised the officers for doing a good job by deescalating things that could become a bigger problem.

The board unanimously approved the revised “use of force” Humboldt Police Department policy. 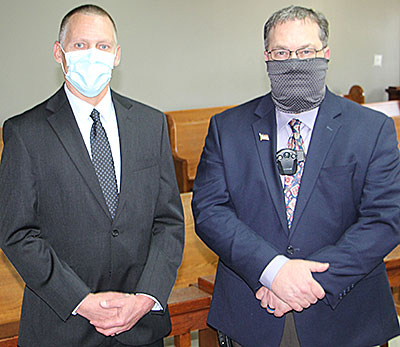 NEW POLICEMAN – Jason Hamlett (left) was hired last week as a new patrolman with the Humboldt Police Department after city board member unanimously voted to approve. Assistant Chief of Police Dan Ables submitted a letter of recommendation to the board to hire Hamlett. Hamlett had been a member of the Humboldt Fire Department and will now transfer to HPD.

•A letter of recommendation was submitted to the board for hiring a new police officer. Assistant Chief Ables letter to the board stated candidate Jason Hamlett had passed the National Police Officer Selection test, physical agility test, medical exam, drug screen, psychological evaluation and meets all requirements of Tennessee law.

Ables said Hamlet is currently a firefighter for the Humboldt Fire Department and would be transferring to the police force. The assistant chief noted there are pluses of hiring a firefighter who has first responder training, hazmat training and other helpful knowledge and experience.

The board voted to hire Hamlet as a Humboldt police officer.

Alderman Graves asked Williams if he has experience as a firefighter.

Williams said he worked for the Milan Fire Department in the past and also as a volunteer fireman with other agencies.

Chief Owens said Williams will have to attend the academy to be certified but he has enough training that qualifies him to work immediately.

The board approved the chiefs’ recommendation and hired Williams.