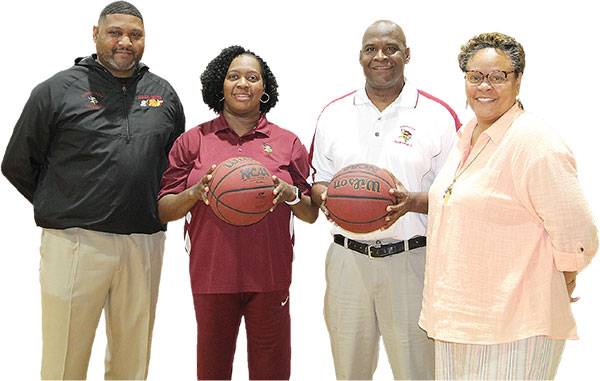 NEW COACHES – When the Humboldt High School Lady Vikings take to the hardwood next season there will be two familiar faces courtside. Coaching the Lady Vikings will be head coach Dorrington “Junior” Reid (second from right) and assistant coach Stephanie Williams (second from left). Principal Carla Brown (right) and athletic director George Yarbro (left) are proud to have two seasoned coaches heading up the basketball team next year.

When the Lady Vikings take to the court next fall, there will be two new coaches courtside. But even though both coaches are new for the 2021-22 season, they are both familiar faces.

This week, Humboldt City Schools announced Dorrington “Junior” Reid has been named head coach for the Lady Vikings. His assistant coach is Stephanie Williams. Both Reid and Williams bring years of experience working with student athletes.

Williams also brings a wealth of experience as a coach. She was an assistant coach for the Jr. Lady Vikings basketball team for a few years. Williams moved up to the high school ranks and coached under Lady Viking head coach Louis Johnson. Williams also had a stint coaching at Crockett County.

“I’m excited to announce the seasoned head coach for Humboldt High School Lady Vikings and his assistant coach. Dorrington Reid and Stephanie Williams will lead the basketball team for the upcoming 2021-2022 season,” said Humboldt Jr./Sr. High School Principal Carla Brown. “Both are experienced in the game and have a combined number of 35 years of service. They are eager to get started and we will be looking for everyone’s support during the season.”

Both Reid and Williams are equally enthused about working together. Over the years, they have coached at the same time during their years in Humboldt but never together as a team. They are excited to work side by side.

Reid and Williams said learning the basics and fundamentals at an early age are key to creating a winning program.

“We started a girls’ pre-k through sixth grade program in March,” Williams noted. “We played teams from different cities, even different states. We had good support from parents too.”

This elementary program will show dividends once these players advance to the middle school level. Reid and Williams both want to get elementary school student more involved in all sports to create a pipeline of athletes moving up the ranks.

“I have over 20 years experience but that doesn’t mean anything,” Reid added. “You learn from your mistakes and I’ve made my share. I’ve had success and I’ve had failures.”

One thing both Williams and Reid want is to have all sports program to work together from the early grades up to high school.

“When Coach (Thomas) Boykin and I worked together, he wanted to make sure my kids knew the game of basketball and understand the game,” Reid said of how his junior high program would mesh with the high school program. “We wanted that transfer to be seamless.”

“We’re going to work with the new junior high coaches,” Williams added of the importance of both high school and junior working together as a team.

When asked about his coaching philosophy, Reid said it’s basketball. He said you have to play to your strengths. If the team has fast athletes, they will play a fast game. If the opponent has a fast team, they will slow them down and vice-versa.

Both Williams and Reid reflected on their favorite time during their coaching careers. For Williams, it came in 2009.

“It was a long road,” Williams stated. “I saw our girls start to peak and we made it to sub-state. That’s where I saw that growth. That’s what you want—growth.”

For Reid, it was much of the same.

“My last year at the middle school, the team we had pulled it together at the end,” Reid recalled. “We lost to Crockett County twice that year but beat them in the West Tennessee tournament. I told them (after the season loss) keep your eye on the goal at the end of the season.”

Reid agreed, saying, “There are two games within a game—the scoreboard and character. It hurts to lose the game but you never want to lose character.”

Both Reid and Williams are looking forward to getting to know their team. Spring practice and summer camp will help.

Last season was tough for the Lady Vikings with a young team that had only one senior and three of the five starters being freshmen. Those underclassmen got lots of on-the-court experience. The building blocks were put in place for the 2021-22 Lady Vikings to take a step forward.