Most events will remain the same, some will
see changes, others had to be canceled 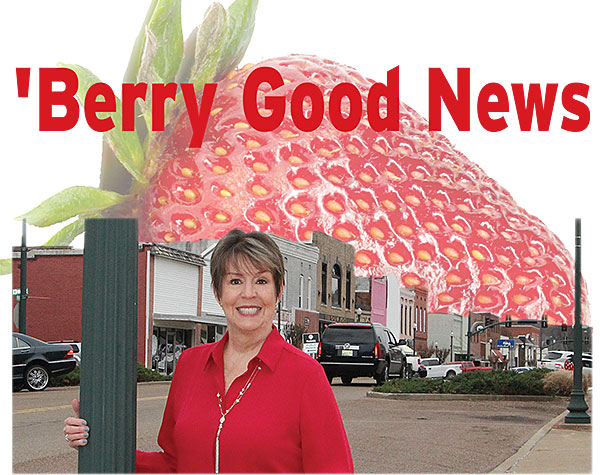 A few weeks ago, Strawberry Festival officials announced the festival is still on. That has not changed and now they have the full week planned out. Of course, changes could and probably will happen when festival week gets closer.

Festival president, Betty Langley, spoke about this year’s festival including some changes. Most events are still on, some will change and some had to be canceled due to COVID concerns.

The highlight of the Grand Floats Parade will be the Gibson County Mass Band made up of students from each high school in the county. The band will have approximately 350 students and will bring up the final act in Friday’s parade.

President Langley said all the officials and royalty from last year would carry over to this year. Last year was the first time since WWII that the Strawberry Festival had ever been canceled.

Fred and Vicki Benjamin will be honorees of the 83rd annual West Tennessee Strawberry Festival. Humboldt Utilities will be one of the dedications, as will the late Jack Ramsey.

The Strawberry Festival Magazines printed last year were never sold due to cancellation. These will go on sale again this year. A new, updated schedule of events and information sheet will be inserted in the magazines to make them up to date.

Something new this year will be a souvenir booklet that will include a map of the city showing when and where all the events will take place. The map guide will be full of important information for locating events, parking, hand washing and sanitizing stations, as well as where each vendor will be located along the parade route.

Langley said there will be 7,000 souvenir booklets printed and can be picked up at the Humboldt Chamber of Commerce and several businesses and other location all across the city. The booklets are free.

One event that typically takes place two or three weeks prior to festival week is the City Tour. The tour had to be canceled this year due to COVID. The group of officials and royalty toured local industries, businesses and enjoyed lunch with the Rotary Club. Instead, this year, strawberry royalty will meet for breakfast at the chamber, then visit downtown Humboldt since they will miss out on the City Tour. Part of the morning will be an art painting session at Laura Giles Studio. The young ladies will also visit businesses and restaurants downtown.

•Sunday – The Invitational Art Exhibit at the West Tennessee Regional Art Center has been canceled.

Monday evening will be the Opening Celebration at the Barker Memorial Football Stadium at Humboldt Jr./Sr. High School. Compared to the last event, this one will be scaled down for safety concerns. The highlight of the evening will be the fireworks extravaganza.

•Tuesday – The Recipe Contest and A Taste of Humboldt have been canceled. In its place will not be an event, but instead a new twist for festival cuisine. A limited number of gift baskets will be available to purchase. The package will include a Chicago Metallic baking pan, Tyson kitchen item, vouchers to festival vendors and restaurants for free items. The gift package will be pre-ordered only and should be picked up Tuesday at the Opera House during festival week.

•Wednesday – During the evening, the downtown mini-park will be the site for strawberry shortcakes.
The Bandstand Revue will perform live on Main Street that evening.

Thursday evening will be live music by Party Planet at the reviewing stand on Main Street across from the Humboldt Higher Education Center (old Main St Elementary School).

Humboldt Hall of Fame reception will be held at First United Methodist Church.

The Junior Miss Territorial Revue will take place at 4 p.m. but in a new venue, the Thomas Ray Boykin Gymnasium at Humboldt Jr./Sr. High School

Following the pageant, at 6 p.m. will be the Miss Teen Territorial Pageant in the gym.

•Friday – The Grand Floats Parade begins at 10 a.m. on Main Street, with the finale being the Gibson County Mass Band.

The Governor’s Luncheon has been canceled in 2021.

The BBQ Cookoff begins at noon at Bailey Park. No Time Flatt will perform that evening.

Strawberry Market on Main is open from noon until 5 p.m. on Friday at its new venue, Twin Oaks.

The Strawberry Festival Horse Show is scheduled for Friday night at the Chalmus Davenport Arena.

Viking Park will be revved up with the Car Show, organized by the Humboldt Area Rescue Squad.

The BBQ Cookoff winners will be announced around noon at Bailey Park.

The Strawberry Market on Main will commence at 10 a.m. until 3 p.m. at Twin Oaks.

The Little Miss Territorial Revue will take place at 11 a.m. in the HJSHS gym.

The Territorial Revue will wrap up Strawberry Festival week at 6 p.m. in the gymnasium.

Langley said Kissell Amusements is booked for the carnival in downtown Humboldt for the week. She noted their staff would keep the rides sanitized regularly for safety.

Langley is the first president to serve two consecutive years as president. This is due to COVID of course. She has persevered throughout. Last year when the pandemic hit, she and General Chairman Sherry Jo Smith did everything possible to have the 83rd Strawberry Festival go on as planned. But with mandatory shutdowns, they had to make the hard decision to cancel Humboldt biggest event of the year.

Langley praised her general chairman, Smith for keeping the faith and going with the (COVID) flow. She also acknowledged the hard work from all the committee members, Humboldt Chamber of Commerce, the city of Humboldt, Humboldt Police Department, Humboldt Fire Department, Humboldt Public Works, Humboldt Utilities and Humboldt Rescue Squad for working together as a team during the logistical headache of producing the Strawberry Festival each and every year.

With everyone ‘Jonesing’ for the ‘strawberry’, Langley, Smith and the chamber of commerce are running pedal to the metal to make the Strawberry Festival a huge success, even if some events had to be canceled and other watered down a bit.

Mark your calendars for the first full week in May for the biggest celebration of the year, the 83rd annual West Tennessee Strawberry Festival.