The Humboldt Board of Education discussed teacher bonuses and approved a motion to get the Tennessee School Boards Association (TSBA) involved in their search for a new superintendent at Thursday night’s board meeting, March 11. All board of education meetings are open to the public.

Humboldt Interim Superintendent Lillian Shelton said that she would like to extend her contract for another year. 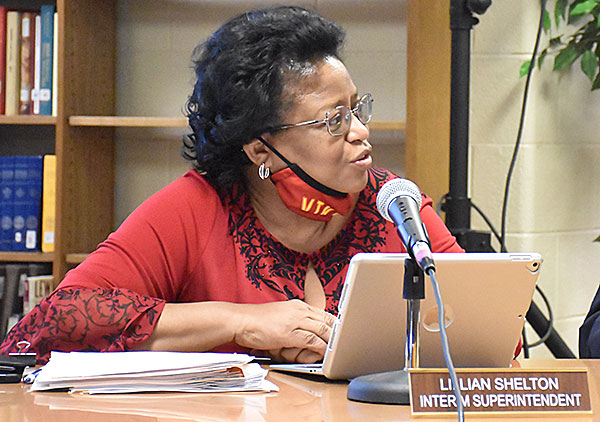 SUPERINTENDENT SEARCH – Interim Superintendent Lillian Shelton (left) expresses her desire to extend her contract as superintendent for Humboldt Schools at Thursday night’s school board meeting, March 11. The board voted to instead begin searching for a new superintendent with help from the Tennessee School Boards Association.

“We have an issue with that,” said Board Member Mark Hodge. “Because we have policy 5.801.”

Hodge pointed to the Humboldt City Board of Education Policy 5.801, namely lines six and seven that read as follows: “An interim Director of Schools appointed during the time of a search shall not become a candidate unless the board expressly permits such inclusion in the selection procedures.”

“I will agree that we have always used TSBA for applications and background checks,” said board member Leon McNeal. “Then they send down recommendations to us … and at that time we can make the choice for superintendent.”

Shelton said that she had been in contact with TSBA and her Tennessee Education Association representative about applying for the position.

“They said the only thing I have to do is ask the board to allow me to,” Shelton said.

Hodge said that he asked the TSBA for verification of the policy.

“The reason this was written was so that interims couldn’t have a three month or six month tryout, and other candidates would have to come in cold,” Hodge said. “We would be looking at some candidates on paper, and now you’ve had the tryout. So that’s actually the history of this policy, to keep that from happening. If we were going to (extend Shelton’s contract), then that should have been clarified at the beginning, and not now when we’re starting our search.”

“I cannot support our current interim,” Hodge said. “If I could have just a couple of minutes, I could explain that. Just to set precedent, we had a meeting in May of 2019 and for 11 minutes and four seconds of that meeting, the floor was given to our now-chairperson Ms. Wedley. She had something that was really passionate on her heart and she shared that very clearly to us for well over 17 minutes, and I will not take that long. But she started out with this, it was the Tennessee code annotated section.”

Wedley interrupted Hodge saying, “I was strictly told that if you were going to do an open discussion, you cannot call names, but you already have. I want to keep it legal because I don’t want a lawsuit, but if you want to make yourself open to a personal lawsuit, I’m not going to silence you, I’m going to protect the board.”

“So what you’re going to do is, you’re going to refuse to hear how there have been falsehoods and misleadings,” Hodge responded. “I have over 20 quotes of you helping us and giving us precedence on how you stand against dishonesty and being misleading. You set the precedence, and now you are our elected leader, and so now we can’t even be held accountable for the words of our own leader in this.”

“Sir, what I’m trying to say to you is if you call names, you open yourself to the liability of a lawsuit along with the board of education,” Wedley said.

After some arguing from several board members, Hodge continued, “You set the precedent and you gave us clear direction on your feeling of dishonesty,” Hodge said. “In that meeting, I agreed with the way you explained that. You were right on task on that. Even though you and I disagreed on other parts of it, the way you explained yourself and everything was right on point. That being said, now that you are our elected chairman, that is part of our character of leadership now as a board.”

Hodge said that he has received several concerning emails over the last few weeks.

“Some of them concerned kids coming back to school and the mothers being talked out of it, concerns within the schools and how people are being treated,” Hodge said. “I have personal emails -names redacted- talking about how they have been feeling let down, how they can’t come and talk to anybody because they’re in fear of their jobs and in fear of retaliation. We have to deal with that. Now I am in the same place that you were at in that moment when you were sitting there and you verbally made the statement and the cause that you did.”

“There’s no way that we can represent the entire system and not go without this being looked into and investigated so that teachers know that we stand behind them,” Hodge said. “There has been enough done in this year that let us know that we cannot continue with this interim superintendent. We have to move on and have TSBA come and help us with our search.”

Hodge made a motion for TSBA to come and assist the board with finding a new superintendent under the $11,500 “Plan 2” package found on the TSBA website.

McNeal amended Hodge’s motion to swap Plan 2 for Plan 1, which costs $6,500 instead, but doesn’t conduct superintendent interviews for the board.

Hodge seconded McNeal’s amendment. The board voted 3-2 to us TSBA for the superintendent search with Hodge, McNeal and Wayne McLemore voting for the motion, while Board Member Terry Johnson and Wedley voted againt. Johnson said he voted no because he wanted to know where the money for this search was going to come from.

McLemore asked if there were plans to give any of the money to teachers.

“Yes sir, I do, with ESSER 3.0,” Shelton said. “I hope to match what the other counties are doing and more.”

McLemore asked if he could get Shelton’s statement in writing.

“Yes sir,” Shelton said. “I want that as much as the staff wants it, so we’re going to make sure it gets done.”

Details on when ESSER 3.0 will be coming were not provided.

•The board heard a presentation on their 2020 audit report. There were several findings at Humboldt Jr./Sr. High School and there were no findings at the district office.