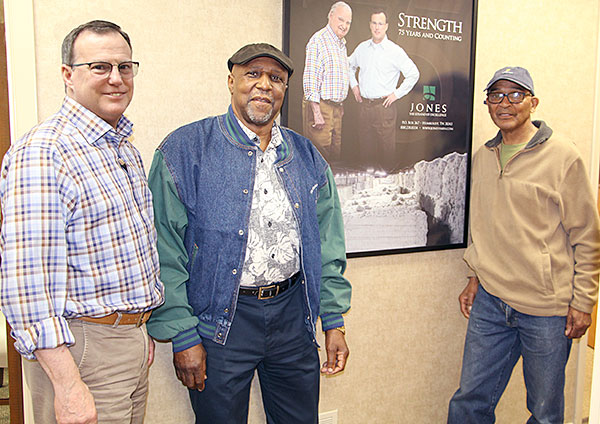 RETIREES – Ralph Jones III, executive chairman of Jones Family of Companies (from left), congratulates Frank McCurrie and Jerry Cox on their retirement. Cox spent 46 years with the company with a couple of stints for Uncle Sam overseas. McCurrie put in 47 years with the Jones Family. Both men said they are thankful for their jobs that allowed them to provide for their families and considered the Jones family as their own families.

It is not often to have two people retire from the same company at the same time after spending over four decades with the same company. But that is the case when Frank McCurrie and Jerry Cox decided to call it quits after long careers with Jones Family of Companies, formerly Jones Manufacturing.

McCurrie had spent 47 years working for the Jones family. Cox put in 46 years with the company, minus a couple of stints with Uncle Sam overseas.

Last week, McCurrie and Cox sat down with Ralph Jones III, executive chairman of Jones Family of Companies. The three reflected on days past. There were lots of good memories shared. 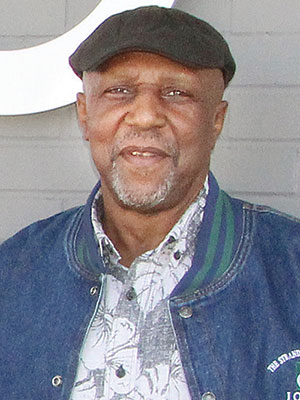 “I started (working for Jones) in January of 74 at J&J,” McCurrie said.

J&J was a cotton processing plant that took by-products, cleaned it to make a higher quality to spin into yarn, according to Jones. He said that operation on McKnight St. ran for 25 years.

McCurrie said he moved to the 14th Ave. plant where he ran the spinning frame machine for several years. He then moved again, this time to the Avondale plant operating the spinning frame but this was a different model. McCurrie moved again within the company to the Bypass plant when it was also a yarn spinning operation. When the Bypass location stopped spinning yarn, McCurrie moved back to the Avondale plant before finally moving to the warehouse operations. During his career, McCurrie worked at five different locations within the Jones Family of Companies.

“I enjoyed every bit of it,” McCurrie said of working for the Jones family. “They are like my family. I’m blessed to work for them. It allowed me to provide for me and my family. Mr. Ralph (Ralph Jones Jr.) was like a father and good to work for—Ralph (III) too.”
For McCurrie, working for the Jones family was also a McCurrie family career. All three of McCurrie’s brothers, James, L.T. and John, worked for Jones Family of Companies.

Cox has a similar story as McCurrie, coming to work for the Jones family at a young age right out of school. He was hired in May of 1975 to work at the 14th Ave. plant as a spinning frame operator. 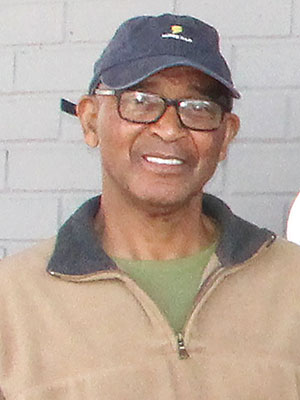 “Jerry was a ‘spare hand’, he could do every job on any machine, any shift, anytime, anywhere,” Jones said of Cox. “He was invaluable to the operation.”

“I would watch a job and try to learn,” Cox said of his ability to fill in where needed.

Like McCurrie, Cox moved from plant to plant within the Jones operations. He left the 14th Ave. plant and moved to the Avondale plant. After that, he moved to the Bypass location, then back to Avondale, then went to the Jones Milan location and returned to Humboldt at the McKnight plant.

But Cox was not only a key worker for his employer, he served his county as a member of the Army National Guard. He joined the National Guard in 1976.

During Cox’s military career, he was deployed overseas twice. His first deployment came in 2004-05 during Operation Iraqi Freedom. His job was a truck driver hauling supplies for the troops.

Cox’s second deployment was also in Iraq during Operation New Dawn in 2009-10. This time Cox had a more dangerous mission as security for commercial drivers. He drove an MRAPV (mine resistant ambush protected vehicle) used to protect personnel from IEDs (improvised explosive device). This was a heavily armored vehicle able to withstand IED explosions. Enemy troops planted IEDs that killed and maimed many soldiers. During this mission, Cox was stationed at an Army, Navy and Air Force base outside of Baghdad.

Cox spent 16 months in Iraq during his first deployment and six month on his last mission. When he returned home, the National Guard sent him to Mississippi to train soldiers. He spent three years there.

“My wife and I had just discussed how good they (Jones family) have been to my family,” Cox said of his tenure of his manufacturing career. “I thank them for giving me a job. I gave it a try and I liked it.”

Working in a factory can be hard work. When asked the hardest part of their jobs, both Cox and McCurrie agreed, it was loading the 100 lb. rolls of cotton onto trucks or box cars.

Jones said it was definitely the hardest job within their operations. A truckload holds around 450 rolls. A box car can handle 600 to 700 rolls. At that time, all were loaded by hand.

Now, the rolls are loaded on pallets and loaded with forklifts.

The Jones family has rewarded their staff with family picnics. Employees and their families from all the plants would come together for fun and games, and of course good food. Cox said they were ‘off the chain’.

To mark these men’s longevity, the company hosted a celebratory dinner for them and their families.

As retirees, tops on the list with their free time is spending time with their families. McCurrie said he has three great-grandchildren that he wants to spend more time with. Cox has some grandbabies of his own that will keep him busy.

Cox also has a 1967 Camaro drag car he is working on. He has a mechanic garage where he, ‘plays with his stuff” on the side.
McCurrie plans on doing some hunting and ‘dipping his hook in the water’ at local rivers and lakes.

Jones praised both men for their work ethic and their character. They will be missed. At the same time, he is happy for them in their retirement, which they have earned.