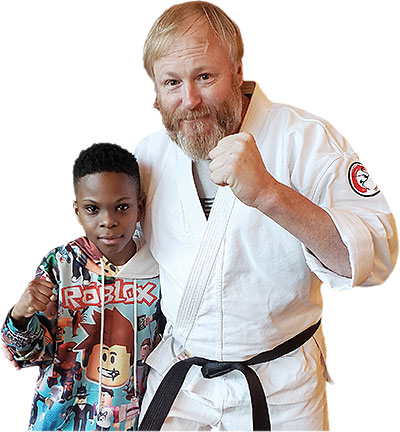 NEW STUDENT – Javion Moore signed up as a new student last week for Jason Walter’s martial arts class. Moore’s grandmother, Teresa Moore of Humboldt, wanted him to enroll in order to counter virtual learning and with little contact with others. Walters said he always has a one-on-one session with new students before putting them in a group. This allows assessing their ability, and he can provide them with the basics and a uniform so they feel more comfortable on day-one of group class.

GNK Defense, owned and operated by former Humboldtan Jason Walters, is holding classes at the Opera House in downtown Humboldt. Classes are held once a month, every month for two nights. The first night of the class is learning the art and the second night is application.

Walters is a former United State Army Special Forces Green Beret. Recently, he retired in 2016 after 24 years of service. He started in the National Guard in Humboldt and soon started climbing up in rank after fully enlisting in the Army.

Walters now resides in Franklin, Tenn. with his wife and their two children. After retiring, the family moved to Franklin to be in the middle of the state so he can easily access any town in Tennessee but plans to come back to Humboldt when their children graduate.

“I wanted to find a way to give back to the community that I grew up in and find a place to run a small business,” said Walters. “My sister, Brandy Barger, is friends with Jocelyn Bundy. She and her husband own The Opera House.”

With COVID slowing all businesses down, especially event venues, Walters thought it would be a great time to help out a friend of the family and start his small business.

“At the time it worked out and the location was great, it just worked, but I will soon venture out and start a martial arts school and employee a small staff,” added Walters.

Eventually the business and classes will grow as Walters also wants to offer hang gun classes. 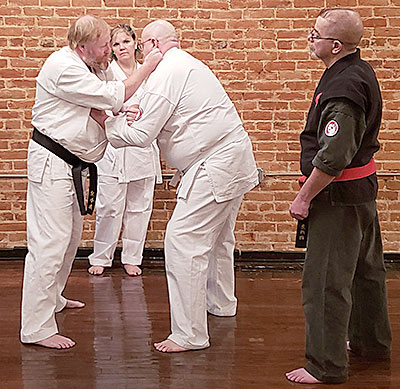 SELF DEFENSE – Martial arts instructor Jason Walters (left) demonstrates a technique called Naihanchi Shodan with opponent John Mercer. It is a self defense technique applied to someone that has grabbed you with a two hand lapel grab. Carrie Mercer looks on from the background. Brad Keel, in the black uniform and red belt (master’s level rank) is a sixth degree black belt, and is Walter’s instructor.

His inspiration came from his 24 years in the military. He traveled the world training other militant soldiers to have hand-to-hand combat, as well as knife and gun combat. Walters says individuals can use the art forms he teaches in everyday life while in the parking lots of shopping center, parking garages, protecting your home or any location.Walters started out in Karate in Milan with Eli McCoy and soon to follow he did Taekwondo with the Youmans in Humboldt, and has advanced his career and knowledge throughout his life.

GNK Defense came about in 2016, and started very small, with privately to individuals and couples. But he just recently ventured back home to offer classes. With all this experience, Walters just wanted to give back to the community where he first started.

“My body reminds me every morning with aches and pains that I have lived a great life in support of my country. I miss the fallen warriors, my brothers, I served with. I honor them by continuing to be a warrior and passing on the traditions and knowledge. Every one of us faces challenges every day,” said Walters. “My simple guidance is warrior on! Never quit!”

GNK Defense offers the original form of martial arts. Karate is a martial art developed in the Ryukyu Kingdom. It developed from the indigenous Rykyuan martial arts Okinawan, an art that goes back to the mid 1600s.

Opportunity for advancement comes with growth of the art. Everyone starts the class as a white belt, with advancing belts in order of orange, yellow, green, blue, purple, brown and black.

Classes are held in Humboldt at the Opera House, on Monday, Tuesday and Thursday. To register for classes, please contact Walters at gnkdefense@usa.com or (931) 237-4550.

Classes will teach skills such as form, self-defense, self-discipline, spiritual growth and it is for everyone of all ages.