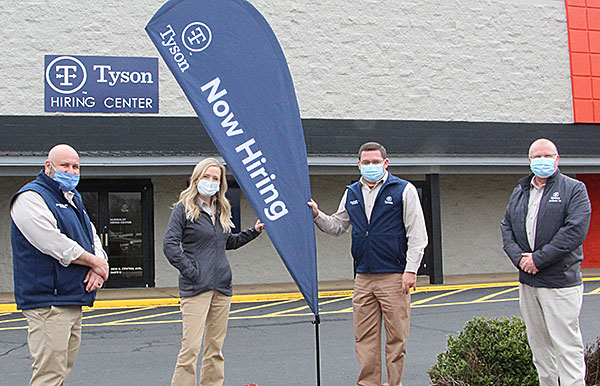 TYSON HIRING CENTER – Tyson is ramping up their hiring process with the projected startup for their poultry processing plant in April. To help fill positions, they opened up a hiring center in the former Walmart building in Humboldt on Central Ave. The center has computers available for job seekers to apply for positions online. As of last week, Tyson still had 200 production jobs to fill and will continue hiring in intervals until they reach full capacity in fall of 2022. Tyson officials (from left) plant manager Tom Sanders, Complex HR Manager Vanessa Presson, Plant HR Manager Blake Law and Complex Manager Tom McCue welcome anyone seeking a good paying job with benefits to visit the center or apply online.

In November of 2017, Tyson Foods announced plans to build a poultry processing plant in the Gibson County Industrial Park. During the announcement, Tyson representatives estimated there would be 1,500 new jobs.

Now, in less than two months, the plant will open. Complex Manager Tom McCue said last week that the plants is scheduled to open in early April and should be putting out product by the end of April.

The biggest task at the moment is hiring workers. To do so, the Tyson Humboldt Hiring Center has opened in the former Walmart building located at 2500 N. Central Ave. The center is open Monday through Friday, 8 a.m. until 5 p.m.

The hiring center has 30 computers for people to use to apply for jobs online. The center is for those who may not have internet access. Team members are onsite to assist those who are not familiar with computers or the internet.
Complex HR Manager Vanessa Presson said job seekers who have internet access should apply online at tysonfoods.com/careers. There is no need to come to the center.

BIRD’S EYE VIEW – This bird’s eye view of the Tyson poultry plant puts prospective on the enormous size of the building. Once the plant is running at full capacity, there will be 1,400-plus team members working.

Even though the eventual number of team members needed for the operation is in the neighborhood of 1,400-plus, the start-up number is around 350. There are currently 200 production jobs to be filled by April, Presson said, and only a handful of production team members have been hired.

McCue noted there are still a few management, supervisor, maintenance and administrative positions open but their biggest need right now are production positions.

READY TO ROLL – State of the art equipment is being installed at the Tyson poultry plant in the Gibson County Industrial Park. This equipment will be put to work come April when the plant begins operating.

Presson urged job seekers to not give up if they are not contacted for this first round of hiring. Come mid-June, the plant will need 365 production team members. The number of positions to be filled will continuously ramp up at different intervals in the coming months. Plans are to open up a second shift this fall. Hiring will be on a similar schedule as now, beginning with a second shift start-up crew that gradually adds more positions until the plant reaches full capacity, projected to be in fall of 2022.

“If you have not been contacted, you can reapply in 30 days,” Presson added. 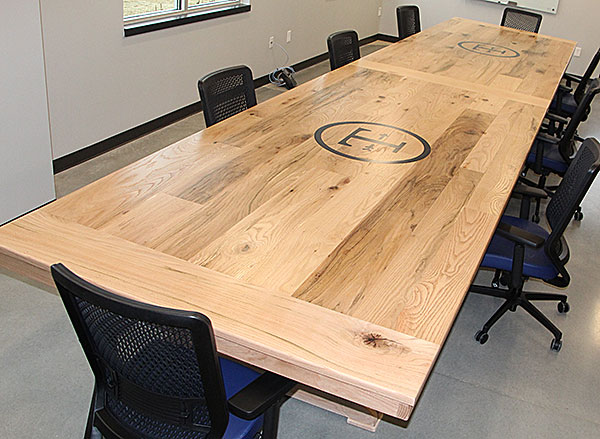 While applying online, job seekers will need to create a profile. There is a place to upload a resume. You will apply directly for the position of interest. It’s that simple.

The Tyson poultry processing plant is the last sector of the complex to become operational. Both the hatchery and the feed mill have produced products. But just like the main plant, only start-up crews have been hired thus far.

McCue said the hatchery located in the Humboldt Industrial Park hatched a half million chicks in January as a trial run. Those chicks were shipped out to supply the Shelbyville facility. The January trial was successful and is ready to begin supplying the Humboldt plant come April.

TYSON HATCHERY – The Tyson Hatchery located in the Humboldt Industrial Park is fully operational and ready to hatch eggs to supply the local farmers with chicks. In January, the hatchery did a test run of a half-million eggs that was successful. Those chicks were used to supply the company’s Shelbyville plant.

The chicken farms to supply eggs and raise chicks are in place with only a couple more farms to bring in. McCue said of the local farmers contracting with Tyson, there are three pullet farms. Pullet farms start with day-old chicks that are raised 21 weeks and moved to the breeder houses. There are currently two breeder houses that lay eggs that are trucked to the hatchery. In 21 days, baby chicks hatch and are delivered to the broiler houses. In 51 days, the fully-grown birds are taken to the processing plant.

Eventually, Tyson will need 335 barns to supply the operation with eggs, chicks and chickens. McCue said most of the barns are already in place. Broiler farms consist of four to eight barns, each requiring seven acres of land per barn. With a price tag of around a half million dollars per barn, local farmers are highly invested and committed to supplying Tyson with eggs and chickens. 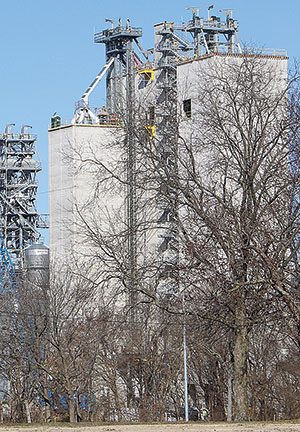 FEED MILL – The Tyson Feed Mill (left photo) is where a combination of corn, soybeans and other products are ground up and combined to make all the feed for chickens raised by area farmers. Crop farmer deliver their harvests, which are stored in huge grain bins to be converted into chicken feed.

The third component in the Tyson complex is the feed mill located in Fruitland. Local farmers haul their soybeans, corn and wheat to the grain bins for storage. The feed mill grinds the right mix of products to feed birds each day. Individual farms have feed bins that are replenished each week.

Both the feed mill and the hatchery will also ramp up hiring in the upcoming weeks, preparing for the processing plant to be up and running in April.

Presson said Tyson provides newly hired team members with a very robust training and orientation. The first week on the job is orientation to learn about the “Tyson culture” and opportunities to advance within the organization. After that, team members receive detailed training, which typically takes several days to a few weeks depending on the position.

“We want it to be a career with advancement opportunities, not just a job,” McCue stated. “We have team members who have had life-changing moments within the company. You can start out on the floor and work your way up into management positions.”

McCue is speaking from experience. He began his career with Tyson as a production worker. Now, 28 years later he is the complex manager.

Another example is a former Tyson CEO started out as a field representative, visiting farmers.

Tyson prefers to promote from within. That is part of the Tyson culture. Worldwide, there are approximately 141,000 Tyson team members. Of those, 120,000 are in the United States.

Some of the top name brands in the food industry are Tyson owned including Hillshire, Jimmy Dean, Wright Brand Bacon, Ball Park Franks and Bryan just to name a few.