CITY BOARD MEETS – The Humboldt Board of Mayor and Aldermen held their first meeting of the year last week and had not met since November 9, 2020. This made for a busy agenda with a resolution, two rezoning ordinances and several building code update ordinances, police promotions, hiring new firemen, a firefighter resignation, a policeman retiring and two city workers resigning.

After not meeting for over two months, the Humboldt Board of Mayor and Aldermen were back in session last week. Their last meeting was November 9, 2020. The two-plus month hiatus made for a lengthy meeting with 21 agenda items.
Among the agenda items included one resolution and eight ordinances.

The first item submitted by Mayor Marvin Sikes was Resolution 2020-04 authorizing matching funds for the Small Cities Block Grant Program/CDBG. Mayor Sikes said Humboldt Utilities has used CDGB grant funding in the past and now it’s time for the city to use it. The city is seeking $420,000 to go toward a new ladder fire truck.

The mayor said he was not sure if the city would get it all or a portion of the request. The city would have to chip in to pay for the remainder of the cost for a fire truck. He noted the $420,000 would not be enough for a new truck and the city might look at purchasing a used truck that is in good condition.

Alderman Don Graves asked if the city would have to match the grant funds. Mayor Sikes said there would be some money no less than 11-percent. The resolution state the match would be determined by ECD and includes a 4-point reduction for Three Star Communities and an additional 4-points in COVID relief reduction.

The board unanimously approved the resolution, which allows for the city to submit the grant application.

The next two agenda items were ordinances to rezone property. Both sets of property had been discussed last year and had been bulked into one ordinance. Board members thought it was confusing and the mayor agreed. There was also confusion as to the proper ownership of one of the parcels.

Ordinance 2020-08 was presented last week, seeking to rezone property owned by James and Dora Williamson. This ordinance would rezone the property on the corner of Fitzgerald Dr. and N. Central Ave. from R-2 medium density residential to B-2 general business.

Board member Leon McNeal said he had expressed his opinion about this property at the previous meeting and was against rezoning. When the vote was taken, the first reading of the ordinance was passed 3-1 with Graves, James Shivers and Monte Johnson voting to rezone and McNeal voting against. Alderman Bob Pruett had yet to make it to the meeting and was running late.

The next item, Ordinance 2020-09, was to rezone property across the street from the previous ordinance. This property is owned by Alderman Johnson, who abstained from discussion and voting since it would be a conflict of interest.

With Johnson not being able to vote and McNeal apposing the ordinance, there would not be enough votes to pass the ordinance with only Graves and Shivers for rezoning. That’s when Pruett arrived during discussion. Pruett, like McNeal, had voiced opposition to rezoning, saying he will always look out for neighborhoods.

When the vote was held, it was 2-2 and Johnson abstaining. The tie vote allowed Mayor Sikes to cast the deciding vote. Before he voted, Sikes said he appreciated McNeal’s and Pruett’s valid opinion on the matter but he was voting for progress for the city. The first reading of the ordinance was approved 2-2-1 and Sikes’ vote as a tiebreaker.

These ordinances must pass a second reading before being approved.

The next six agenda items were more ordinances and were bulked together since all were adopting current building codes to the latest version, the 2018 edition of the International Building Code. All six were unanimously approved on the first reading and must pass a second reading before approval.

•Mayor Sikes presented the resignations of two city employees, Bruce Pafford and James Johnson. As soon as McNeal motioned to accept their resignations and Shivers seconded the motion, Mayor Sikes called for discussion. But before any discussion could be made, Pruett called for “question”, which ends discussion and calls for a vote.

The vote was unanimous.

•There was one letter of resignation and another letter of retirement from the Humboldt Police Department for the board to discuss and vote.

Kimberly Graves informed Police Chief Reynard Buchanan that she was resigning her position of police dispatcher effective immediately. Chief Buchanan requested a letter of resignation but he had not received one.

Graves asked the chief why she resigned, to which he replied that she was not happy.

Lt. Clyde Fuller submitted his retirement letter to Chief Buchanan. In the letter from Chief Buchanan to the board members, it stated that Lt. Fuller had served 33 years with the Humboldt Police Department. Lt. Fuller served as an investigator, as well as a patrol sergeant and later patrol lieutenant. Buchanan noted Fuller was his lieutenant when Buchanan worked patrol.
Mayor Sikes said Lt. Fuller is a good man and was a good officer for the police department.

With Fuller’s retirement, that left a vacancy in the chain of command. Chief Buchanan recommended Sgt. Josh Bomer be promoted to lieutenant to fill the position, based on Humboldt PD policy.

In Chief Buchanan’s letter, he stated that Sgt. Bomer has been with the department for over five years and has done an exceptional job as a patrol sergeant for his supervisors and he is very well respected by both his peers and the men and women he leads. 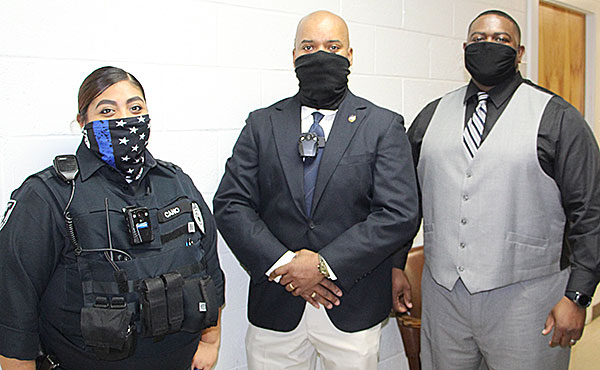 OFFICERS PROMOTED – Humboldt Police Chief Reynard Buchanan (center) submitted a retirement letter from Lt. Clyde Fuller who spent 33 years on the force. With the loss of the lieutenant, Chief Buchanan recommended Sgt. Josh Bomer (right) be promoted to lieutenant, and recommended Ptl. Laura Cano promoted to fill the sergeant position. The city board approved both promotions.

With Bomer’s promotion, that left the department void a sergeant position. Chief Buchanan recommended Ptl. Laura Cano be promoted to sergeant to fill that need.

Buchanan stated that Ptl. Cano has been with HPD for four year and has been working in a supervisory role since January 2020 in the absence of Lt. Curtis Baxter, who was injured. Buchanan said Cano has natural leadership qualities and the city benefits from her skills.

Mayor Sikes said he and the board know these officers well.

•Humboldt Fire Department Chief Chester Owens submitted a letter of resignation to the city board from firefighter Stephen Lewoczko. Lewoczko said in the letter that his experience with HFD has been rewarding and he is grateful for the opportunity to serve.

With the board’s approval of accepting Lewoczko’s resignation, Chief Owens presented his recommendation to hire two new firefighters, Hunter Lewis and Tim Strnad. In the chief’s letter of recommendation, he said both Strnad and Lewis met and exceeded the requirements of the hiring process with a background check, physical agility test, basic skills test, oral interview, physical and drug screen.

The board asked if any have firefighter experience.

Chief Owens said Strnad has some experience but is not certified and Lewis has no experience. He said both are scheduled to attend the Fire Academy this month for 10 weeks.

The board voted to accept Chief Owens recommendation and hire both men as Humboldt firefighters.

•The board received a beer permit request for Ali Said Dardas, who will operate a convenience store on the corner of 22nd Ave. and Mitchell St. in the former Caraway Motors building. The beer license would be for carryout sales only.

McNeal questioned if the city could approve a beer permit with Bailey Park right across the street.

Chief Buchanan said the city’s ordinance that limits beer sales within 500 feet from a park, church or other like place does not pertain to carry-out sale. That ordinance is for on-site consumption.

Dardas said he hopes to open in mid-February and is waiting for his coolers to arrive.

The board unanimously approved the beer permit.