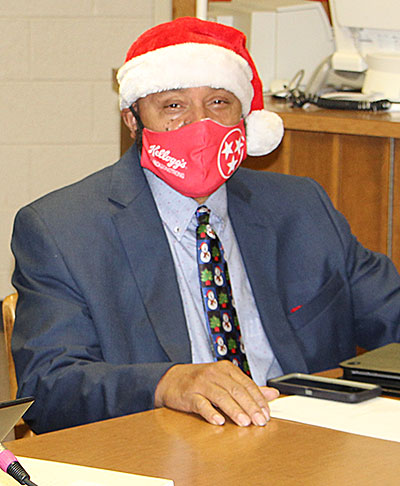 CHRISTMAS SPIRIT – School board member Terry Johnson was in the Christmas spirit last Thursday donning his Santa hat and snowman/Christmas tree tie during the board meeting.

The Humboldt School Board met last Thursday evening for the first time in two months. The November meeting was canceled due to health and safety concerns with the COVID pandemic.

The board made quick work of the agenda with discussion limited and voting soon after.

It was during the superintendent’s report that most of the discussion was held, primarily on the school system’s CASA afterschool program.

Interim superintendent, Lillian Shelton announced the school system has joined in a partnership with the Stigall Center for the afterschool program. Shelton said the program runs from 3:15 to 5:15 p.m.

Board chairman, Leon McNeal, asked if the auditorium (at the shutter school building on Ferrell St.) could be used instead. He noted it is already part of the school system.

Board member Mark Hodge had questions concerning the Boys & Girls Club and how it would affect that partnership for the afterschool program.

McNeal remarked that he knows what kind of kids go to the girls and boys club.

Shelton asked Elvie Patterson, CASA director, to report on the program. Patterson said the Boys & Girls Club declined the partnership. She noted there were concerns with COVID. There were many restrictions and rules, and no longer wanted to partner with the school system. Patterson said there were kids not wearing masks, not social distancing in the classroom and kids running around in the gym unsupervised.

McNeal continued to ask why the auditorium could not be used instead of the Stigall Center.

Patterson said sites have to be approved by the health department. They must be safe for kids, she added.

McNeal asked if the Stigall Center had been approved. Patterson said the health department had approved it. McNeal noted the auditorium is part of the school system and could be used.

Patterson said an auditorium setting is not conducive for the program since there are snacks and dinner served to the students, and they would need to break into groups by grades.

Hodge wanted answers on how moving the program to the Stigall Center would affect the Boys & Girls Club. He said when the club came to Humboldt it has been a staple and made an immediate impact on Humboldt’s children.

Hodge asked if kids would be pulled from the club to go to the Stigall Center. He said the school system should not pull the partnership but instead support them.

Patterson said no kids would be pulled from the Boys & Girls Club. Student on a waiting list will be the ones going to the Stigall Center.

There was discussion if the students at the Boys & Girls Club would still receive snacks and dinner. Patterson said the school would continue to supply snacks and meals. It was noted the club still wants the food.

•Earlier in the meeting, the board approved bids for computers. Wayne Sheehan, technology director, submitted a bid sheet to the board with two companies offering bids for teacher lease, students lease and cart purchases. CDWG submitted bids for teacher laptops ($982) and desktops ($835). BGC Systems bids came in at $1,200 for laptops and $1,090 for desktops.
Sheehan recommended accepting CDWG’s bid. The board unanimously approved Sheehan’s recommendation.

•The board gave the go-ahead with electrical repairs to the football stadiums. Greer Lashlee with Lashlee-Rich, construction manager on the project was asked is the price was the same. He assured the board the cost is the same.
McNeal asked when work would begin, to which Lashlee stated, “tomorrow”.