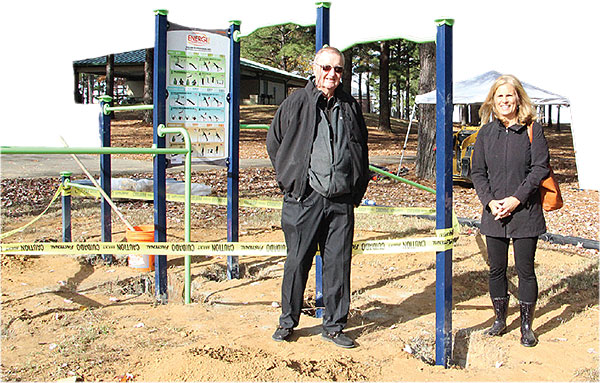 EXERCISE EQUIPMENT INSTALLED – Three Way Mayor Larry Sanders and Playworld representative Beth Ramer were in Pine Hill Park last week checking out the installation of the new workout stations. There are three stations going in along the park’s walking trails, each with multiple types of exercise with varying degrees for the beginner to the experienced.

When Pine Hill Park in Three Way was in its beginning stages 10 years ago, city officials had dreams of what the park could become. Of course a playground area for the children was at the top of the list, along with a pavilion and walking trails.

As time went on, another item was added to the list of possibilities—exercise equipment. Now that plan is coming to fruition.
There were three workout stations being installed last week that should be ready for use within days. Each station is designed to have multiple varieties of exercises with various degrees from beginners to the experienced.

All three stations will have a mulch base underneath for safely and protection, and has plastic borders to keep it in place, similar to the playground area. There is plenty of room for two or three people to use the stations at the same time.

Each station includes signage that explains how to use the equipment, including diagrams and instructions.

Last week, Beth Ramer with Playworld was on site to check out the installation progress. Ramer, Mayor Larry Sanders and Alderman Danny Wade checked out the stations and were pleased.

During several city board meetings over the past few years, Mayor Sanders and aldermen Mary Ann Tremblay and Wade have discussed adding exercise equipment along the walking trail. Mayor Sanders reached out to some companies that specialize in playground equipment and exercise equipment. He asked for quotes and received them from two companies. Playworld offered the best price and the board approved the project. Playworld is the company the city used for most of the playground equipment. They have quality products.

The city budgeted for the exercise equipment but when COVID stimulus money became available from the federal government, Mayor Sanders submitted a request. He stated how the equipment would be used and noted that gyms in the area had been closed due to the pandemic and even now that they have reopened, some people are skeptical about going back to the gym. Exercise stations in the open air at the park would be an alternative to going to a gym for fitness and wellness, the mayor said.

The mayor’s request was approved. The stimulus money assisted in funding the exercise project.

City officials hope this is just the first phase of providing workout stations along the park’s walking trail. No immediate plans are in the works to add more stations but a couple of years down the road, more could be created.

For now, Pine Hill Park visitors will have something new to try out while visiting. Whether it is used for fitness or just to occasionally burn a few calories while enjoying the park, these new workout stations will be a nice addition to the park’s amenities.