For one Humboldt property owner seeking to have his land rezoned, the second time’s a charm. But, before it is rezoned, it will take a third vote.

The Humboldt Board of Mayor and Aldermen met last week on Monday, October 12. Once again, an ordinance to rezone the property was on the agenda. This same item was on the board’s agenda for their September 28 meeting.

Property owner Eugene Carnell is seeking to have two adjacent lots in Bradford Acres subdivision rezoned from R-1 residential to B-2 general business. The properties are listed as 2711 Central Ave., which is the house on the corner of Central and Dowsley Drive, and 1403 Dowsley Drive, which is a vacant lot.

A local bank is seeking to purchase the property and open a second branch there.

In September, the board refused to make a motion and a second in order to at least discuss the rezoning. Last week, Alderman Monte Johnson made a motion and Alderman James Shivers seconded, allowing for discussion and a vote.

Alderman Bob Pruett was first to discuss the rezoning. Pruett said he did not think it was a good move to rezone. He said that piece of property is a cornerstone of that residential area. Pruett also noted there will be more B-2 properties coming.

Humboldt Mayor Marvin Sikes disagreed with Pruett. The mayor said there is already B-2 zoned property next to Carnell’s property. Mayor Sikes said the subdivision’s covenants from 1965 includes ways to be able to pull a property out and describes the procedure.

the stubbed out road across from Wendy’s entrance. Sikes told the lady there would be a fence or greenery to separate the bank from the subdivision and that the lady was okay with the plan.

Alderman Johnson said he had also spoken with people in the subdivision who had the same concerns of traffic. When they found out there would be not extra traffic and saw how the bank plan would be, they were all right with the plans, Johnson added.

Pruett was concerned with what would happen if other residential properties in Bradford Acres wanted to do the same, to which Mayor Sikes said there are 37 properties and the covenants would have to be change for each property if that were to happen.

Alderman Leon McNeal said there are other available properties all up and down Central Ave. from the railroad to the shopping centers. He noted there was commercial property available in front of Walmart. McNeal said the city is going through hard times. He said there are plenty of industry and commercial construction but not enough residential. He said there needs to be subdivision construction in Humboldt and that there are no properties to build houses.

Mayor Sikes disagreed with McNeal and said there are plenty of lots in Humboldt for houses. He noted that eight houses are either built or under construction for Hunter’s Ridge.

When the vote was called for, it was 2-2 with McNeal and Pruett voting against, while Johnson and Shivers voted for. Alderman Don Graves was not present for the meeting.

With the 2-2 vote, Mayor Sikes almost blew a gasket, saying, “This won’t be the last time people will be coming here for commercial (zoning or construction). The bank already has a branch here and they want to expand. It’s ridiculous that progress has to come through this board—it’s ridiculous. This is Alderman Johnson’s district and he wants it.”

With the tie vote, Mayor Sikes broke the tie and voted for the rezoning. Before the rezoning takes effect, the ordinance must pass a second reading, which should be held during the board’s next meeting.

•Mayor Sikes presented two bids for the city’s street paving project. Martin Paving’s bid was for $353,125 while Cantrell Construction’s bid was a bit higher at $390,875. Mayor Sikes’ recommendation was to award the bid to Martin Paving.

“We’ve needed this for a long time,” Alderman Pruett said.

Mayor Sikes explained that he wanted the Governor’s stimulus money awarded to cities and counties to be used for paving. The board voted to add over $100,000 to the stimulus $219,000 for a total of $335,000 for paving.

Sikes said the 20 streets on the list is phase 1 and more streets would be paved in phase 2 next year.

Pruett asked if the city was responsible for state highways within the city such as 22nd Ave., Central Ave. or Mitchell St. Mayor Sikes said it is the state’s responsibility to take care of those streets and the city is not allowed to do anything on state highways.

Johnson stated he wished Fitzgerald were on the list since there is a lot of new traffic on the street.

Sikes agreed with Johnson but said paving Fitzgerald would eat up a lot of the paving budget. The mayor did say it would be considered in phase 2.

The board approved the paving bids with Martin Paving being the low bidder.

•The board approved the bid for the airport fuel management upgrade. Only one bid was submitted, which was by Rebel Services for $22,500

This is a point of sale fuel pump at the airport where customers use a credit card for payment. It had been noted in previous board meetings that Humboldt’s fuel price is lower than most around and pilots will fly into Humboldt just to refuel.

Airport director Chuck Lovell said the current system is obsolete and the company that would potentially work on it if it were to fail said, if it breaks, you’re out of luck.

City Treasurer Kim Hadley told the board that a $15,000 grant would be used toward the fuel system upgrade and the city would only be responsible for $7,500 of the total costs.

•Terry Reasons had requested to address the board. Reasons said he has a problem with city code and how it is enforced. Reasons berated Mayor Sikes and said he thinks it is ridiculous that the mayor will not reply. He said the code enforcement officer came and took pictures but no one had gone to court.

It was apparent that Reasons and the mayor had spoken about a property on 30th Ave.

“Did you come to my house and give it to me good? Do you live in the city? On 30th?” Mayor Sikes asked Reasons.

Reasons said the mayor lied to him, at which point both sides were getting more irritated.

Mayor Sikes shutdown the conversation and said he was done with the discussion. 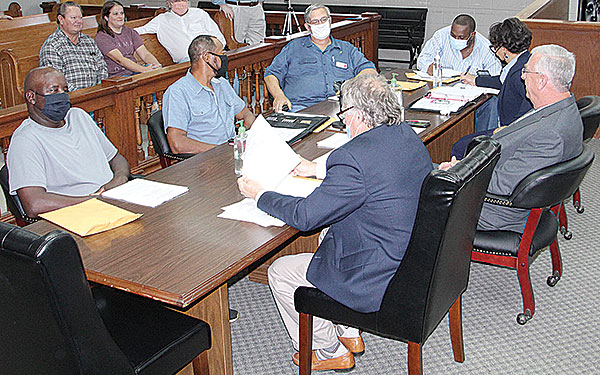 BOARD TABLE – After not making a motion to discuss rezoning of a property during the September 28 meeting, the rezoning ordinance was presented to the Humboldt City Board again during their October 12 meeting. This time the board did address rezoning a property at the request of the owner. When the vote was called for, it was 2-2. Mayor Marvin Sikes broke the tie and voted to approve the first reading of the ordinance. A second reading must be approved before the ordinance is adopted. Those seated at the board table are (clockwise from left) aldermen James Shivers, Monte Johnson, Bob Pruett and Leon McNeal, city clerk Marquita Patterson, Mayor Marvin Sikes and city attorney Randy Camp. Alderman Don Graves did not attend the meeting.