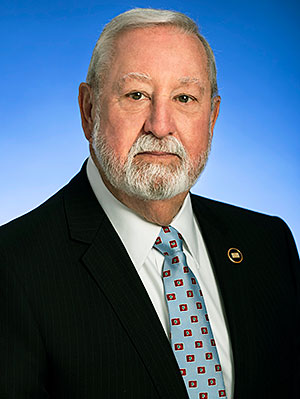 State Representative Curtis Halford, representing Gibson County and a portion of Carroll County, offered a legislative update for 2020. Halford, who grew up in Kenton and has lived most of his life in Dyer, described 2020 as the strangest year in his whole life, especially as a legislator.

“This is the first time ever we’ve been in session three times in one year,” Halford said. “All due to COVID.”

Halford said session began in Nashville on the second Tuesday in January with business as usual. Then COVID showed up in Tennessee in March and began growing day after day. Governor Bill Lee and both the House and Senate agreed to not close this session but instead recessed on March 20.

During the time in session, Halford said there were some 600 bill presented but not had been assigned to any committees.

“June 1st we were called back in session to finalize the budget (which had begun working on in March),” said Halford. “It was a bare-bones budget. We knew we would have to come back and tweak it.”

With so much uncertainty, legislators were forced to make hard decisions with anticipated loss of revenues due to COVID and the additional health care issues. Raises for state employees projected in March were withdrawn.

“Unemployment was on the rise,” Halford noted. “At one time, there were 116,000 (unemployment) cases filed in one week.”

Both the House and Senate began working on those 600 bills when session reconvened in June.

When the state revenue numbers for April came in, there was a shortfall of $12-million, Halford said. But, August was up $112-million over projections. Halford said the extra $600 unemployment benefit from the federal government spurred spending, which pushed August’s number higher than expected.

It was during this time that protests began in Nashville. Halford said people were setting up camp in the Legislative Plaza, which is against the law. Halford praised the Tennessee State Troopers for doing a wonderful job of protecting the legislators as they would come and go to the State Capitol building from the homes or apartments.

“State troopers stood tall and never moved while protestors were up in their faces,” Halford recalled. “Troopers formed two lines, elbow to elbow, for legislators to leave the parking lot. I wonder what extent they (protesters) would have gone if it weren’t for the troopers.”

Halford said the troopers arrested 250 people but Nashville judges would not prosecute any of them. The legislative session was adjourned again but the disturbances at the capital continued.

The bill termed the liability protection bill created a higher standard of care due to COVID, according to Halford. It also did away with frivolous lawsuits by anyone that caught the virus, claiming where they got infected.

The second bill coined telemedicine bill is important for people with disabilities and offered opportunities to select physicians and other health services. Halford said the Senate and House could not come together on this bill during the second session but did in the third session.

The third bill passed was dubbed the law and order bill and dealt with demonstrators.

“In no way would I deny people’s right to protest peacefully,” explained Halford. “But as soon as someone harasses police, fire or first responders, it’s too far.”

Halford said he had personally seen results of demonstrations going beyond peaceful with the burning of the Nashville courthouse, apartment buildings boarded up. Halford noted an incident locally where Jackson firemen were assaulted while fighting a fire.

The law and order bill beefs up the consequences of breaking the law while demonstrating. Aggravated assault becomes a felony. It is a felony to trespass on law enforcement or judges’ personal property with intent to cause harm. The bill mandates 30 days for rioting and 45 days for felony rioting. It also prevents blocking law enforcement and first responders from helping those in need of medical assistance.

“When the law was passed, the demonstrators were nowhere to be seen,” Halford said. “That’s what we intended the law to do.”

On a different subject, Halford and other legislators believe there could be some redistricting after the results of the 2020 census data is collected. He said northwest Tennessee has lost 10,000 in population and will probably lose a House seat. On the flip side, Middle Tennessee is booming and could pick up some seats.

Most Tennesseans and practically everyone across the United States can agree that 2020 has been the strangest year in recent history. Lawmakers in Nashville have witnessed it as well. But through fiscal planning and drudging through the COVID pandemic, Tennessee’s rainy day fund is still healthy and continues to grow.