Property owner seeking to rezone from residential to business

It had been almost three months since the Humboldt Board of Mayor and Aldermen had met. Their last meeting was June 29, 2002.

With 22 agenda items, Mayor Marvin Sikes expected the meeting to be lengthy. But that was not so. The meeting was over in less than 30 minutes.

The Central Ave. address includes a house. The Dowsley Dr. site is an empty lot where a house burned a few years ago. Carnal was requesting his property be rezoned to allow a business to be built there. It has been rumored that an area bank wanted the property with plans to open a branch in Humboldt.

According to the ordinance, on September 9, 2020, the Humboldt Municipal/Regional Planning Commission submitted a positive recommendation for the property to be rezoned.

There was an issue of covenants for the subdivision zoning but that had been worked out. Attorney fees and other costs were done upfront in order to receive a variance.

Monday evening during the city board meeting, Mayor Sikes presented the ordinance for rezoning the property but no board member made a motion. Mayor Sikes asked a second time for a motion with the same results, (crickets chirping).

The mayor seemed to have been thrown off guard with none of the aldermen wanting to even discuss the rezoning. There must be a motion and a second in order to hold discussion on agenda items. To some, it seemed as if the board had made up their minds before the meeting took place.

The eight or 10 people in the audience who were there for this one particular agenda item were just as surprised as the mayor.

With no motion on the table, Mayor Sikes announced the ordinance died for a lack of motion. Those audience members who were there strictly for the rezoning ordinance stood up and walked out of the meeting. The board and other audience members could feel the tension in the air.

The board made quick work of three months of treasurer’s reports, accounts payable reports, police reports and fire reports.

•Two Humboldt police officers had submitted their resignations—Zachary Estes and Seth Shewmaker.
Shewmaker had only been on the police force for a couple of months and had not attended the academy. Estes had been a member of HPD for almost three years.

Alderman Don Graves asked Humboldt Police Chief Reynard Buchanan if there was anything the city can do to retain police officers. He asked the chief if any officer had asked for anything.

Chief Buchanan said Shewmaker had said being a police officer is not for him, as his reason to resign. The chief said Estes has accepted a job with the Madison County Sheriff’s Department.

The board accepted both resignations unanimously.

•In the board member packets, Chief Buchanan submitted a letter to the mayor and board with a request of dismissal for a Humboldt policeman, Roberto Garcia.

The letter stated that Garcia was hired February 2020 and the police department had dedicated and provided every available resource to him. Based on officer Garcia’s overall performance with the department, he has not shown that he is qualified to perform the duties of a police officer.

Buchanan stated in the letter that Garcia is being dismissed within the 12-month probationary period with HPD, according to the City of Humboldt Personnel Policies & Procedures. The chief informed Garcia that he may appeal the dismissal, per the same policy.

Chief Buchanan stated in the cover letter of the reform update, “I am proud to say that these items were implemented into policy prior to my tenure as chief and I will continue to add on to the foundation already built to help us better serve the community and protecting the rights of all citizens. Our agency is constantly discussing our practices and policies.”

The chief told the board that he made the decision to ban a certain hold, which is similar to a chokehold used to render someone temporarily unconscious. He said that particular hold is still legal in the state of Tennessee but he believes it should not be used unless there is a threat to life.

The board unanimously approved the police reform update.

•The final two agenda items were to accept the resignation of the city clerk and the appointment of a new clerk to fill the position.

Valerie Hays submitted her resignation via email on September 8, effective immediately. In her resignation letter, Hays said she regrets not being able to give proper notice but felt it would have been detrimental to her mental health to continue to stay in that environment.

Alderman James Shivers asked the mayor if he tried to talk with Hays, to which Mayor Sikes said he had not. 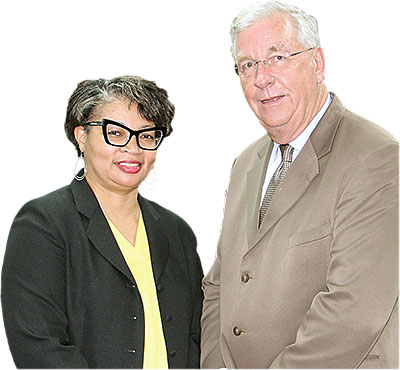 NEW CITY CLERK – Marquita Patterson (left) has been the administrative assistant at Humboldt City Hall for the past few years. Last week, Patterson was promoted to city clerk after Mayor Marvin Sikes (right) appointed her for the position and the city board approved his nomination.

Alderman Graves said Hays was offered a time period where she could come back but she did not.

The mayor said he hated it got to this point.

After the board accepted Hays’ resignation, they moved forward with filling the vacated position by promoting Marquita Patterson to city clerk. Patterson had been the administrative assistant for the past few years.

Patterson, who was serving as board secretary during the meeting, was asked by Graves if she was comfortable with the position. Patterson said she was.

Mayor Sikes said the mayor’s office is moving on and hasn’t missed a beat.

Alderman Monte Johnson asked about filling Patterson’s past position as administrative assistant. The mayor said that position would be filled, hopefully by mid-October.

The board approved promoting Patterson to city clerk.