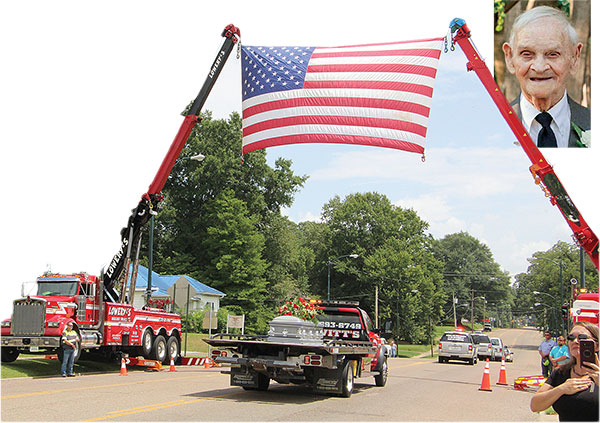 This was the final call made for Earl Privitt as he was laid to rest in Rose Hill Cemetery last Friday. He passed away Monday, August 10.

The emergency call began with the emergency tone, followed by Gail Wallace announcing, “Humboldt Rescue to 101, 101 Mr. Earl Privitt made his last call August 10, 2020 at 3:30 a.m. Mr. Privitt was known as “Paw” to so many. His kindness, faithfulness and gentleness were only a few traits he had. He was founder of Humboldt Rescue and dedicated 30 years of his life trying to save lives. He believed in giving and helping others and never asked for anything back. He held hands of many strangers in their darkest hours. Because of him, many people came home to their families. He was a true hero and guardian angel. The legacy he leaves behind will forever live on with his children, grandchildren and members of Humboldt Rescue. Paw Privitt, we want to say thank you for everything you have done here on earth. Because of you, we can take it from here. You will forever be by our side. Humboldt Rescue to 101. Rescue 101 will be 10-7. 101 to 102, I’m coming home.”

Their son, Jerry Privitt, said that was the way his dad would contact his mother every day when he left work. 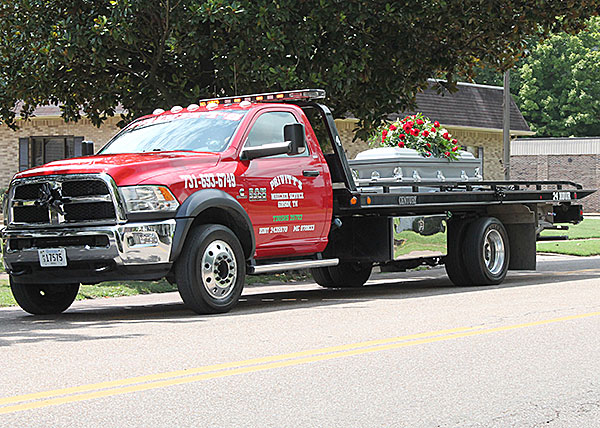 RIDING IN STYLE – Instead of using a hearse to carry the body to the cemetery, Earl Privitt’s family and friends decided to send him off in Privitt style, on the back of one of their wreckers. The casket, draped with the floral spray, was on display for everyone to see.

Privitt’s funeral was unlike any other in Humboldt. The large crowd would have been too much for the funeral home to hold, so The Church at Sugar Creek offered their sanctuary for the Humboldt icon’s services.

But it wasn’t the size of the crowd that made this service unique. Dozens and dozens of wrecker service, first responders, firemen and law enforcement brethren came to show their final respects to Privitt. Privitt’s Wrecker Service has been a mainstay in Gibson County for decades and is still run by the family today.

CONVOY AWAITS – A line of wreckers, ambulances, police cars, fire trucks and other first responders line up on the Hwy. 45 Bypass in Humboldt to participate in the late Earl Privitt’s procession. Instead of leaving the church and going directly to the cemetery, the procession circled around Humboldt one final time for Privitt.

Privitt’s family and friends came up with the idea to send him off to Heaven in a way no one had seen before here in Humboldt. Instead of the casket being transported in a hearse, it was proudly displayed on the back of one of Privitt’s wreckers, complete with floral spray draped on top.

Instead of the procession leaving the church and going directly to the cemetery, the wrecker led a convoy of wreckers, first responders, police, ambulances, firemen and funeral attendees in parade fashion around the city Privitt so loved. They left the church, turned onto the Hwy. 45 Bypass heading north toward East End Dr. The procession continued to Central Ave. where they turned left heading to Main Street. Once they hit Main St. the procession continued through downtown, toward the cemetery. In front of the former Main Street Elementary School (now the Humboldt Higher Education Center) two enormous wreckers with extension arms on each side of Main St. hoisted a large American flag, flying over Main St. As the procession got to 19th Ave., the emergency vehicles continued forward and the line of cars turned onto 19th to Rose Hill.

On Main St., people lined the street to pay their final farewell. Many were videoing the procession with their phones. It was certainly a sight to see and worthy of recording.

Earl Theophilus Privitt was born December 18, 1924. He and the love of his life, his wife Ola, had five children, Virginia (William) Singleton, Joan (Danny) Smith, Gene (Ginger) Privitt, Rickey (Dawn) Privitt and Jerry (Mitzie) Privitt.
After Ola passed away, Privitt was lucky enough to find true love once again with Peggy, so they wedded. 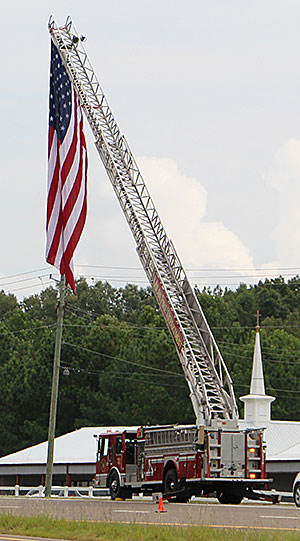 FLYING OLD GLORY – Milan Fire Department had its ladder truck in Humboldt last Thursday to fly the American flag on the bypass during Earl Privitt’s funeral.

Of all the awards and accolades Privitt earned over the years, most people would say his best accomplishment was founding the Humboldt Area Rescue Squad. He and his family poured their hearts into the Rescue Squad. The Rescue Squad is an all-volunteer organization that is totally funded through donations and sponsorships. No one on the squad is paid.

HARS first formed in 1989, but it was the brainchild of Privitt’s son Jerry back in 1988. Humboldt policeman, Danny Lewis, was killed in a car wreck on the Hwy 45 Bypass. The closest ambulance was in Dyer, Tenn. It was this tragic accident that spurred the Privitts to act.

Jerry said he and Andy Rice talked about the need for providing emergency care for Humboldt and the surrounding area. They put their plan in action and began soliciting funds from local businesses. The Humboldt Area Rescue Squad was born in 1989 when they purchased their first crash truck.

Frank Warmath of Warmath Communications donated the old shop building and the land on East End Drive to the Rescue Squad in the early 1990s. This was a major turning point in the history of HARS. It gave them a home, a place to train and a place to store their equipment. The old two-bay mechanic shop was converted into a life-saving abode for HARS.

In those early days, Mr. Earl provided cars for the squad to use for training. Not long after, more and more training took place. Rescue Squad volunteers were earning certifications in various emergency areas. Humboldt Rescue’s reputation grew and soon made a name for itself. Rescue squads from other cities and counties were coming here to train.

The more training and certifications unfortunately meant more expenses. This is where Privitt excelled. Mr. Earl knew practically every person in Humboldt and would call on individuals and businesses for donations. Without these donations, the Humboldt Rescue would not be able to operate.

But the people of Humboldt and the surround area were grateful for the services provided at no charge. Many graciously opened their wallets to support Privitt and the Rescue Squad.

As serious as Privitt was when it came to Humboldt Rescue, he was also known as a comical character. He was quick witted and always had tall tales to tell. He was proud to be a spry old man and often showed it by doing the splits in public places or kicking his foot up to the top of a door-facing while his other foot was in the doorway. Each time after his acrobatic moves, he’d reply,

“Not bad for an 89 (or whatever his current age was) year old man.”

Privitt will always be remembered as a pioneer, founding member of the Humboldt Area Rescue Squad. But he will most be remembered for the fine, life-loving person he was.