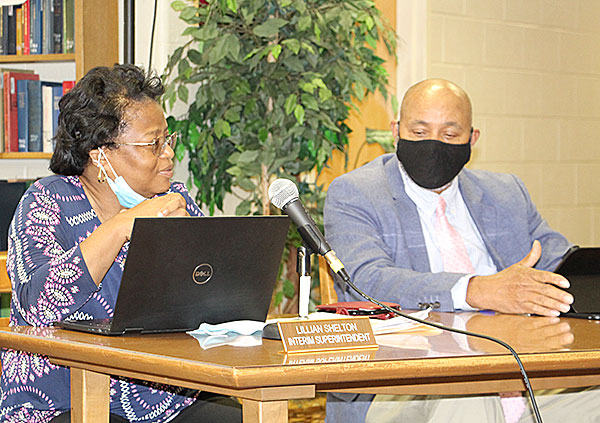 DELAY OR NOT TO DELAY – Interim superintendent Lillian Shelton (left), school board member Terry Johnson (right), and the rest of the school board discussed delaying school until after Labor Day. Johnson suggested delaying school two weeks. Shelton, along with all three principal told the board they are ready for school to open.

School began as scheduled last Friday. But three days prior, the possibility of not opening schools was up in the air when members of the Humboldt School Board suggested postponing the opening.

During the school board’s August 4 called meeting last Tuesday afternoon, board chairman Leon McNeal said he has been thinking hard about opening as scheduled. He suggested postponing school until after Labor Day due to the recent uptick in the number of COVID cases in Humboldt.

“When you asked, I said we’re ready to go,” Interim superintendent Lillian Shelton replied to McNeal.

“I want to thank the teachers and staff for ripping and running,” board member Valeria Wedley said. “There’s a lot to consider. It might be a good thing to push it back further. We have parents expecting to start Friday, but some are not ready.”

Board member Terry Johnson suggested pushing the start date back two weeks saying, “We want to protect teachers and staff.”

“If our superintendent, teachers, principals are ready,” board member Mark Hodge said of watching the date. “Let’s get it going.”

Wedley said Humboldt is becoming a hot spot for COVID and there have been deaths in the community. She said she lost a family member the night before the meeting.

“It’s scary,” Wedley continued. “I like Mr. Johnson’s idea of two weeks. I like Mr. McNeal’s idea to wait. And I like Mr. Hodge’s idea, if we’re ready, let’s go. I’m just thinking what could happen and what couldn’t happen.”

McNeal noted Shelton had hit the floor running since being hired a couple of weeks ago and was doing a good job. But delaying school would give her more time to get things set up.

Wedley asked Shelton if she has a game plan.

“Teachers have a seating chart,” Shelton explained. “The health department can contact those in immediate, close contact (with an infected person). We have an isolation room at each school.”

Shelton noted there is a list for student restroom breaks, as well as lunch and P.E. Students will be tracked throughout the day.
McNeal asked the principals’ opinions whether to start school as planned or delay.

“Stigall is ready,” Stigall Primary School principal Tiffany Purnell added. “Our teachers are working hard to make it safe for our kids.”

Board member Wayne McLemore, who was a late arrival, said he has concerns.

“What do we do?” McLemore asked. “COVID is increasing. If a kid gets it, they will point their finger at you. Kids need to be in school. People need to work. I’m scared.”

McNeal closed discussion and called for a vote on the school calendar, which reflects August 7 as the first day of school.

“This is the hardest vote I’ve made,” Wedley said during the role call vote. “Teachers are teachers for a reason. Principals are principals for a reason. I have to go with what they say.”

The school calendar was approved 4-1 with Johnson casting the only “nay” vote. 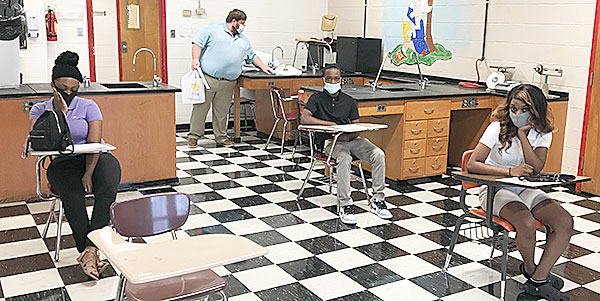 FIRST DAY OF SCHOOL – Seniors were the only class attending school last Friday at Humboldt Jr./Sr. High School on the first day of the new school year. A low number of students attended with half the class selecting virtual learning. In Brian Cole’s class on Friday, Ebony Johnson (from left), Trimond Woodruff and Caitlyn Armstrong social distance. Once the regular schedule takes place next week, students will remain in the same classroom throughout the day and teachers will rotate to keep congestion in the halls to a minimum.

•The board approved the school’s 2020-21 budget with a 3-1 vote. Hodge voted against the budget. This agenda item took place prior to McLemore’s arrival.

“In the future, I will look closer at the budget, especially raises,” Wedley stated.

Wedley said she will look at how well the person performs their job as to how much raise is given. If they perform at a higher rate, they deserve more, if they don’t, they do not deserve as much, she contended.

“There were so many contracts signed that shouldn’t been signed,” McNeal noted. “I’ll make sure that don’t happen again.”

•The board voted 4-0 on the interim superintendent’s contract.

Hodge questioned why the stipulation to live within the city limits was waived in the contract. Hodge noted that McNeal had said numerous times the superintendent should live in Humboldt.

Wedley said Shelton purchased her house before it was in another city (Three Way) and before, it was in Humboldt. It was also noted that Shelton owns property in Humboldt.

“I’ll stand by my opinion, (the superintendent) should live in the city limits,” McNeal said. “I’m going by what the policy says. We had to find somebody fast.”

Hodge referred to another segment of the contract stating if Shelton is not elected to the position of director of schools, she will return to her prior position. He questioned is Shelton can be a candidate for the permanent position of director of schools. He referred to a board policy that states the interim director appointed at the time of a search shall not become a candidate unless the board expressly permits such inclusion in the selection procedures.

“I’m a complete believer in, ‘if it ain’t broke, don’t fix it’. I will fight tooth and nail to keep her if she performs well,” Wedley replied. “My hope is Ms. Shelton does an awesome job. If someone else is selected, I hope they do an awesome job.”

According to the contract, Shelton will receive $6,893.83 per month, plus medical and hospitalization insurance. The board will supply expenses for technology and equipment to perform the duties, such as cellphone, computer, software, printer, internet and portable internet devices. She will receive one vacation day and one sick day for each month. These are all standard items for past superintendents’ contracts.

•Toward the end of the meeting, Hodge asked to discuss some of the recent hirings. Hodge paraphrased a board policy that states no person will be considered for employment until a person asks to be considered.

When Hodge referred to an email from Shelton to the school board members, McNeal shut him down. Hodge stopped his dialogue but asked members of the media to see him after the meeting.

“My concern Mr. chairman is your leadership skills,” Hodge said to McNeal. “Please be fair. Lead despite your emotions. You need to resign (as chairman) and let Mr. Terry (Johnson) take it back over.”

“We have aired out concerns,” McNeal said. “We’re moving on.”

“Quit with the insults,” Wedley pleaded. “Everyone’s opinions can be different. Push the positive. Teachers are on board. Let our school system roll.”