COACHES MEETING – Last Thursday morning, all sports coaches from Humboldt Jr./Sr. High School attended their annual sports information meeting as the new school year approaches. Pertinent information was presented from various professionals from the community. Athletic Director George Yarbro organizes the meeting each year to give the coaching staffs the information they need.

When Gov. Bill Lee signed Executive Order 55 last week, it lifted the restrictions on contact sports for high school football and soccer. The executive order will enable football to begin practices with contact drills, which had been banned.

Tennessee Secondary School Athletic Association (TSSAA) will still have procedures to follow due to COVID-19 for the safety of the players, coaches and fans in the bleachers.

Last Thursday during the annual coaches meeting for Humboldt City Schools, athletic director George Yarbro brought all the coaching staffs together. Each year prior to the beginning of school, the coaches come together to get information as they prepare for each sports season.

With football just around the corner, most schools had already changed plans for the upcoming season. The state had stated earlier that game would not take place until September with an eight-game season and less playoff games. But when Gov. Lee lifted the restrictions, things went back to normal, including the full season of games and practice in pads with contact.

For most high schools, the first game of the season will be on Friday, August 21 although some will play a day early on Thursday, August 20. One of those matchups will be two heavy-hitters from Gibson County when the two-time state champs Peabody Golden Tide travel to take on the Milan Bulldogs in their newly renovated stadium with artificial turf.

The Humboldt Vikings scratched their first game of the year against Memphis East and will open the season on the road against the Halls Tigers on August 28. The Jr. Vikings will open their season at home against Northview on Thursday, August 13.

For fans attending games, it will be different in these coronavirus times. Each fan will have his or her temperature taken prior to entering the stadium. Social distancing will be practiced in the bleachers. Families will be allowed to sit together for others much maintain the 6-foot guidelines set by the CDC. Fans will be required to wear facemasks.

For the Lady Viking Volleyball team, the schedule will go as planned as well. The ladies are scheduled to take to the court on August 18 against Halls. The Jr. Lady Vikings open their season on the road on August 13 at Munford.

As will all activities and plans in today’s pandemic times, they are subject to change at a moment’s notice. But for now, coaches, players and teams are moving forward with the current plans. 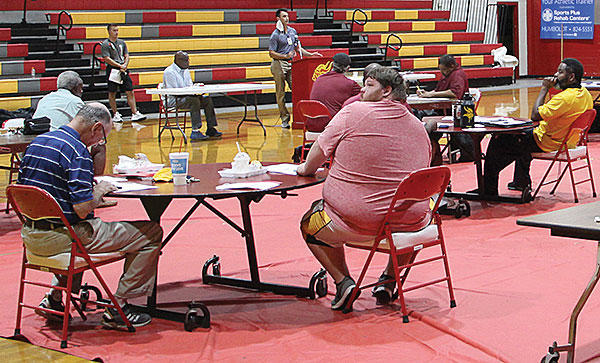 LANSDALE SPEAKS – Humboldt physical therapist Jeff Lansdale (standing at podium) speaks to the coaches last Thursday of the services they can provide for both training and rehab for students playing sports.