Chief Buchanan… We are always looking for ways to make our department better. 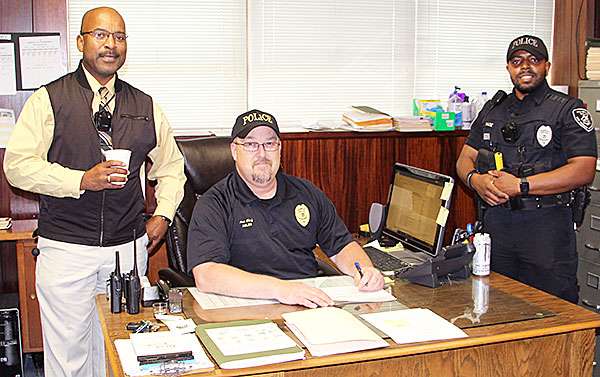 POLICE REVIEW POLICIES – Humboldt Police Chief Reynard Buchanan (left) and Assistant Chief Dan Ables (center) routinely go over Humboldt police policies to make sure they are up to date and reflect standards set by the city and state. In light of the state of the nation where some are calling for defunding police and a systemic change, Humboldt police want to be sure every action by a police officers is done by the book. Ptl. Markeith Wade is also pictured.

The nation is at a crossroads when it comes to police, social injustice and political differences. These issues are fueling fires. The death of George Floyd has fueled these fires, and more and more people are calling for change in police policies.

There are some who are calling for a systemic overhaul while others say do not judge all police departments by a few bad apples. Either way, police departments across the country are looking into their policies and their police force to assure horrific events such as George Floyd’s death do not happen.

Humboldt Police Chief Reynard Buchanan said his department is delving into their policies and review them regularly. The chief and his officers look through policies to see if any need changes or updates.

“We are always looking at ways to make our department better,” Chief Buchanan said.

Buchanan said he believes Tennessee is ahead of the game when it comes policies for police. Humboldt police and other police departments are reviewing and implementing eight items in the #8cantwait platform, a 40-year study of officer reform. They include:
•De-escalation
•Ban chokehold and strangle holds as a means to subdue alleged perpetrators
•Promote a “Duty of Intercede” for any officer witnessing what they believe to be an unjustified use of force
•Ban shooting at moving vehicles
•Require comprehensive reporting of all uses of force
•Exhaust all other means before shooting
•Require warning before shooting
•Require use of force continuum

Chief Buchanan said HPD had implemented these eight items prior to his tenure as chief.

“What happened to George Floyd wasn’t policing,” Chief Buchanan said. “All police departments are paying for the actions of an officer (Derek Chauvin).”

Some are saying there are systemic problems of racism in police, but Chief Buchanan does not agree.

“Systemic racism?—not on my watch,” the chief firmly said.

Chief Buchanan believes being a small town where everyone knows everyone, Humboldt’s police force doesn’t have a systemic issue of any sort. Humboldt has a diverse police department that reflects the diverse population.

Breonna Taylor’s death is another incident making the national news.

“Breonna Taylor, the no-knock warrant, was tragic,” Buchanan said. “One of my worst nightmares would be for us to make entry into the wrong house, so we take precautions to prevent that from occurring.”

If there is one procedure Chief Buchanan said he and his officers use regularly and makes the biggest impact is de-escalation. Humboldt police hold de-escalation training each year and Buchanan is a firm believer it works. Something as simple as calming people down when police are needed could turn a potential big issue into a peaceful resolve.

“The state mandates training for emergency vehicle operations, firearms, mentally ill and child abuse,” the chief said. “We do other training including de-escalation and racial profiling.”

When asked his opinion of defunding police, Chief Buchanan wondered how it would be feasible to take money from one area of police and move to another for additional training. His solution was to have training as standard procedure. He said you can never have too much training.

Accountability is key to having a well-run, quality police department. If an officer gets written up, no matter how severe or small the issue might be, they have to be accountable for their actions. Buchanan said police officers have to leave their beliefs and bias at home when they put on the badge. They are here to protect the citizens.

“The mayor has a duty to make sure I’m doing right,” Buchanan further explained. “It’s my job to hold supervisors accountable or I’m not doing my job. We all have to be accountable for our actions.”

All in all, Chief Buchanan said things in Humboldt are good, especially compared to what is publicized by the national news media. There have been some problems and incidents along the way, but he has faith in the brave men and women on the Humboldt Police Department. And he plans to continue developing the force to make it the very best it can be.