Board to hold first meeting in new city hall July 6 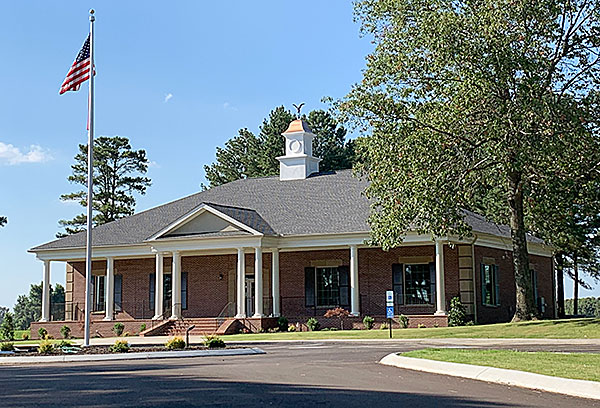 THREE WAY CITY HALL – The brand new Three Way City Hall is now open for business. After years of discussion, planning, secure funding and eventually taking the big step to build a city hall, the Three Way Board of Mayor and Alderman will hold their first official meeting in the new boardroom on Monday, July 6 at 7 p.m.

After months of construction, a local town has a new city hall. The Three Way City Hall was open for business June 2. Three Way Mayor Larry Sanders, along with Alderlady Mary Ann Tremblay and Alderman Danny Wade are proud of their new facility.

The Three Way Board of Mayor and Aldermen will hold their first official meeting in the city hall on Monday, July 6 at 7 p.m.

The city hall has more of a traditional look with the exterior being brick, large columns on the front porch and a hip roof, as opposed to the industrial style buildings some cities have opted for. It is roughly 4,000 sq.ft. and sits atop the highest point of the municipal grounds. It is flanked by large, mature oak, pine and other trees.

The boardroom accounts for approximately half the building and has large storage closet for tables, chairs and other items. The main hallway runs from the front of the building to the back.

On the mayor’s office side, the front office has a window where customers can do business. The mayor has a corner office at the front. A small conference room is available for meetings or other such needs. Of course there are restroom facilities for the public.

Mayor Sanders has described the city hall as very nice but not over the top.

City officials learned very quickly in the planning process that building a government building is costly. The new city hall comes in with a price tag of approximately $1.4 million. The city used a low interest loan from the Tennessee Municipal League Bond Fund to pay for the city hall. A portion of the loan had been used earlier for paving city streets.

Mayor Sanders said the city has already made two of the annual note payments. City officials are proud to have built such a nice building without raising taxes on the citizens.

Building a city hall had been on city officials’ radar for years dating back to November of 2005 when former mayor Jimmy Hill, and aldermen David Turner and Wade voted to purchase 15 acres next to the fire station on Three Way Lane.

When Three Way incorporated in 1998, the first board meetings were held in a small office in front of the fire station. A few years later, the city constructed a meeting room on the back of the fire station. City board meetings had been held in that same meeting room until April 6 of this year. When COVID hit, the board held virtual meetings via Zoom meeting for their May and June regular meetings, plus a called budget meeting.

Joint meetings were held to decide practically every part of the planning of the city hall. After plans were approved and bids were let, the city decided to put the project on hold due for an unforeseen issue in the city. A bridge on Turner Loop Rd. had been downgraded and was on the state’s critical list for replacement. Not knowing the cost or how to pay for the bridge, the board was force to put the city hall on the back burner.

Luckily, the bridge replacement qualified for federal and state money that funded the bridge 100-percent. After several months of the bridge project, a year later the board opted to revisit the city hall project. Since the bids were a year old, Lashlee-Rich went back to the winning bidders to see if their bids were still valid. With reasonable increases, mainly due to construction material costs, the city moved forward.

A ground breaking ceremony was held August 3, 2019. Shortly after bulldozers and backhoes were moving dirt and dumping gravel for the new entrance driveway. In September 2019, the foundation work was completed and soon after floors, walls and the roof were going up. Ten months later, the keys were handed to Mayor Sander on June 2 and the city hall was ready for occupancy.

It was during the June 1 Zoom meeting, the board decided the first official meeting would be July 6. Social distancing practices will be in effect for safety.
With their new digs, city officials expect a larger than usual crowd to attend the meeting to get a look at the new city hall. During the July meeting, the board will discuss hosting a grand opening and ribbon cutting to proudly put the new city hall on display. Everyone is invited to this and any city board meeting. 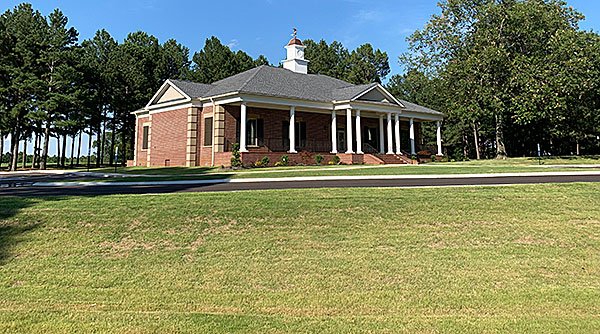 TOP OF THE HILL – The new Three Way City Hall sits at the highest point of the city’s municipal complex. When city board members voted to purchase 15 acres in 2005 for the complex, building a city hall was on the radar. The Three Way Municipal Complex includes the city hall, Pine Hill Park and the city’s maintenance building.