Split board votes not to approve the budget 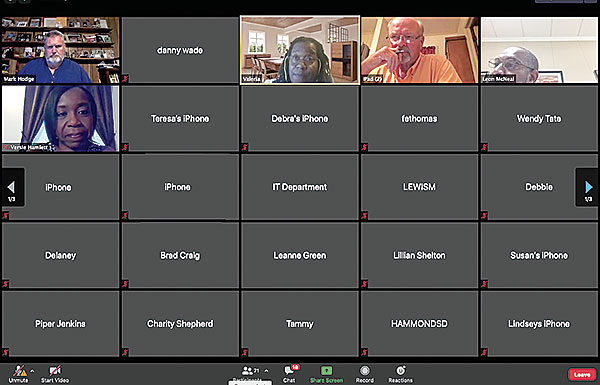 Screen shot of school board meeting with 71 participants.

The Humboldt School Board met Thursday night, not in their regular manor of a public meeting in the library, but instead via Zoom conference meeting. The meeting number and password were made available for the public to tune in.

All five board members, along with Dr. Versie Hamlett, director of schools, were in attendance, although board member Terry Johnson had issues staying logged in. With the assistance of Technology Director Wayne Sheehan, Johnson was able to take part in discussion and voting over the phone with Sheehan. It wasn’t the perfect situation but it worked and got the job done.

Prior to Johnson being able to communicate with the board, the other four members, Leon McNeal, Mark Hodge, Valeria Wedley and Wayne McLemore went about business. They approved the consent agenda, agenda approval and the first four regular agenda items.

Two agenda items had board members at odds during discussion—selecting a mediation representative and approving the 2020-21 school budget.

While discussing who would represent the school board at a mediation meeting with attorneys on July 14, board chairman McNeal asked to let him be the representative as chairman to attend the mediation.

The mediation stems from a lawsuit Dr. Hamlett filed in federal court seeking to keep her job and alleging the vote not to extend her contract was directly due to McNeal’s demands to “clean house’ and fire qualified white educators and replace them with black educators. Dr. Hamlett refused his demands and said in the lawsuit she refused to engage in this racism.

During Thursday’s Zoom meeting, McNeal said he asked the attorney about serving as the mediation representative. According to McNeal, the attorney said it would be a good idea for McNeal to be there.

Board member Hodge questioned if McNeal was the right person to represent the board since he was the one named in the lawsuit. Hodge said the representative should be someone not named in the case.

Hodge admitted he himself was not the right person to represent the board in the lawsuit. Hodge said he thinks Wedley would be a good representative.

Wedley kindly turned down’s Hodge’s nomination. Wedley said she does not have an issue with McNeal being nominated as mediation representative. She noted that a nomination has to be made and someone has to go to the mediation.

Hodge continued his belief that the chairman was not the right person. Hodge said he spoke with attorney Michael Hill who represents the board in the case. Hodge said the board needs to work out who the representative should be as correctly as they can.

Johnson made the motion to nominate McNeal for representative, which was seconded by Wedley. The vote was 3-2 with Hodge and McLemore voting against. McLemore said since McNeal is the focus of the lawsuit, he voted no.

The other agenda item that generated lots of discussion was approving the school budget. In late May, the budget committee met to work on the budget. Budget committee includes chairman McNeal and vice-chairman Terry Johnson, who McNeal selected as the other school board representative. Dr. Hamlett and school finance director Leanne Green are also members of the budget committee.

Wedley asked if board could look at salaries, move items around or increase pay during the workshop.

McNeal said the board can make adjustments.

Dr. Hamlett told the board that it is a balanced budget and includes a 2-percent raise across the board. Everyone is treated fairly, she added.

Hodge asked Dr. Hamlett what would happen if the board postpones approving the budget. He wanted to know if postponing would affect purchasing textbooks or other things preparing for the new school year, which is slated to begin July 31.

Dr. Hamlett said textbooks could not be purchased until a budget is approved.

McNeal talked about the school buildings need repairs and upgrading. He would like to have a line item for money to be used to improve the buildings.

Wedley believes a workshop would give the board a chance to look closer at the budget, item by item. She did not see any harm in having a workshop.

McLemore disagreed and said he was not sure if the board was qualified to look at a budget. He noted that two professionals, Dr. Hamlett and Green, do an excellent job creating a budget. He asked if the board is questioning their work.

Wedley said she fails to see the argument.

Hodge’s concern was timing if the budget is not approved. He asked Dr. Hamlett what principals need to prepare for school.

Dr. Hamlett said textbooks must be purchased. Teacher supplies need to be here in time for the beginning of school. She is also concerned for the safety for students and staff with coronavirus still being a threat. Getting cleaning supplies and personal protective equipment ordered needs to be done now.

With some of the discussion not being part of the budget process.

Dr. Hamlett seemed to take offense to that line of thought. Dr. Hamlett said both she and Green made themselves available. She also called out McNeal and Johnson for not participating in discussion during the budget committee meeting.

Wedley asked if the budget is not passed, when would it come back on the agenda.

McNeal said it could be on the July 9 meeting or the board could call a special meeting for the budget.

With the budget failing, there was no discussion of when a budget workshop would take place.

•Three teachers were granted tenure at the request of their respective principals.

All three teachers were approved unanimously.

•Both licensed and non-licensed school staffs were given a 2-percent salary increase after the board unanimously approved the salary schedules.

Dr. Hamlett said government officials in Nashville talked about it. She said there was some discussion of offering bonuses instead. Dr. Hamlett said the 2-percent raises were kept in the school budget.

•The board approved the 2020-21 textbook adoption. The school system requested the intent to purchase any of the resources on the Tennessee official list.

•Amendments to the school’s 2019-20 school budget were submitted and approved unanimously.

The first reading was held for three policy updates—emergency closing, telework during emergencies and FFCRA leave.

•The board approved Resolution 2020-1, which allowed suspending policies for the 2019-20 school year that conflict with new State Board of Education emergency rules and policy changes. This resolution was necessary due to COVID-19 pandemic closing schools.

•In Dr. Hamlett’s superintendent’s report, she spoke about the new school year that for now is still scheduled to begin July 31, 2020. With so many unknowns, it is difficult to predict what will happen.

She offered four options that are being discussed.

Category two would be all students participate virtually.

The third category being discussed would be some students physically in the building, while others learn virtually.

The fourth category would be cyclical or intermittent, physical or virtual education.

Dr. Hamlett said all four scenarios are dependent on CDC guidelines, and the commissioner of education and governor.

McNeal said the superintendent and school board should work toward goals to open the schools.

Dr. Hamlett said she and her staff are gathering information from the state and from parents. The school system has a survey available for parents to fill out of what they want for opening school. So far, about 15-percent of the parents have responded.

Dr. Hamlett said all superintendents in Gibson County are collaborating. You need these types of multiple data points when making decisions regarding safety.