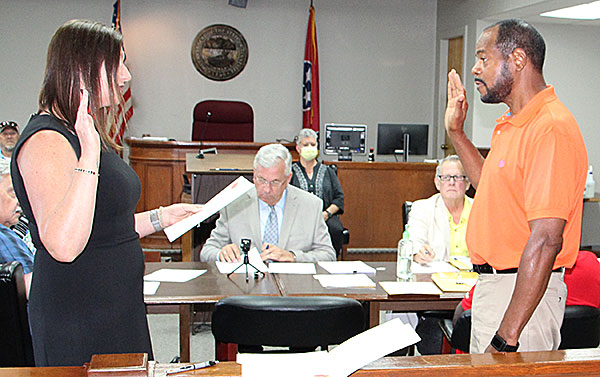 JOHNSON SWORN IN – Monte Johnson (right) takes the oath of office administered by Clerk & Master Amy Brown during last week’s Humboldt Board of Mayor and Aldermen meeting. Humboldt Mayor Marvin Sikes (seated center) appointed Johnson to fill the seat that had been vacant due to the passing of Johnson’s wife, Alderlady Donna Johnson. The board overwhelmingly welcomed Donna’s husband to fill her alderman’s seat.

The Humboldt Board of Mayor and Alderman has a new look. During the Monday, June 15 meeting, Monte Johnson was sworn into office.

The seat had been vacant for a few months after the passing of Alderlady Donna Johnson. Humboldt Mayor Marvin Sikes made it be known shortly after that he would like her husband, Monte, to assume his late wife’s seat at the board table.

Monday evening, the mayor and board unanimously voted and welcomed Johnson to the city board. Humboldt Clerk & Master Amy Brown administered the oath of office to Johnson, who then took his late wife’s seat at the table.

For year’s Mr. Johnson had attended board meetings accompanying his wife. Board members noted how attentive he was to her needs. And because he attended meeting with his wife, he understands how the city operates, board procedures and the ins-and-outs of being an alderman.

In his first meeting as a board member, Johnson got to participate in perhaps the most important duty of a board member—passing the annual city budget.

The first reading of Ordinance 2020-1, an ordinance adopting the city of Humboldt annual budget for fiscal year 2020-21 was presented. The ordinance would keep the city’s property tax rate the same at $2.7297 per $100 accessed value.

A budget summary was prepared by the mayor that hit some of the high points. The first two lines state, “No new debt” and “No new taxes”, followed by a list of where certain spending will happen.

Listed as infrastructure needs, paving was tops on the list with over $300,000 going toward repaving city streets. The city will chip in $100,000 to the state approved Local Support Grant where the city is to receive almost $211,000.

Alderman Bob Pruett asked if the grant had been approved. There had been word from Nashville that funds might not become available.

City treasurer Kim Hadley said he received confirmation early that day that funding has been approved.

Mayor Sikes said paving was long overdue in Humboldt. He noted the $300,000 would pave approximately two miles of city streets.

The budget includes $20,000 to repave Rose Hill Cemetery and $30,000 for improvements at the Humboldt Police Department for painting the exterior windows, new flooring, ceiling tiles, furniture and security system for the department. Another $25,000 at the Municipal Building will go towards repairing the back overhang roof, replace the carpet on the third floor and replace damaged sheetrock and base molding.

The fire department will receive close to $70,000 to replace the roof at fire station No.1 on Main Street, HAZMAT equipment, turnout gear and grain rescue equipment.

A new credit card machine for the fuel pump is budgeted for $10,000. Pilots can fuel up their aircraft 24 hours a day, the mayor said.

The Parks and Recreation Department is slated to get an equipment shed and office building at Spangler Park for around $20,000, while $10,000 is designated to the Humboldt Public Library for building improvements including flooring in the conference room and children’s library.

And last but not least, the budget will reward the 100 essential employees who worked continuously through the COVID pandemic with a 5-percent raise across the board.

The first reading of the budget ordinance was unanimously approved. The second reading and a public hearing will be held Monday, June 29.

The board also unanimously approved the first reading of Ordinance 2020-2, amending the city’s 2019-20 budget.

CITY BOARD SOCIAL DISTANCING – The Humboldt City Board practices social distancing somewhat last week during the June 15 meeting. Department heads took seats along the walls and other areas in the boardroom to be within social distance guidelines, while board members spread out as much as possible and still be seated at the board table.

For the most part up until this point, Johnson had been a spectator during the beginning of the meeting. He listened attentively as the board discussed the first few agenda items. But that all changed when the sanitation contract extension came up on the agenda.

The contract extension would not include a rate increase this year but would have a graduated rate over the last four years of the 5-year extension.
Mayor Sikes told the board that the city had been losing money on sanitation for the past years. He said a $2 per month increase would be needed to break even.

Mayor Sikes agreed with McNeal’s concerns. He said if you check the log, complaints about trash pickup is number one call volume at city hall. The mayor said he made a list of the complaints of what was wrong and sent it to Chad Brown, manager of municipal sales with Republic Services. He wanted to know what Republic planned to do to remedy these complaints.

Brown attended the board meeting and Mayor Sikes asked him to address the board and answer their questions.

Brown thanked the board for allowing him to speak. Both Sikes and Brown agreed that communication was a big part of the issue.

“We dropped the ball,” Brown told the board. “We miscalculated what we need.” Brown said the city produces much more bulk pick up than projected but now that they know how much extra is being produced, they have a plan to handle the extra work load.

McNeal said he was glad Brown cleared things up and that he respected Brown for acknowledging they dropped the ball.

This is when Johnson got involved in the conversation. Being the spouse of the late alderlady, Johnson was aware of the problems.

“If these complaints continue, is there any way to adjust the increases?” Johnson asked Brown. “That way we’ve got something to keep both side happy.”
Brown said Republic is open to communication.

The board unanimously approved the 5-year extension with Republic Service for sanitation pick up. 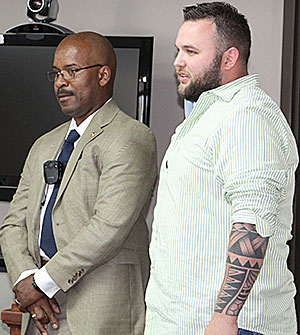 HODGE REHIRED – During June 15 Humboldt City Board meeting, Humboldt Police Chief Reynard Buchanan (left) recommended the board rehire A.J. Hodge back to the police force. Hodge served as an HPD patrolman for three year when he took a position with the Crockett County Sheriff’s Department. Hodge told the board he moved to Crockett County and he and his wife had a new baby. Hodge wanted to be closer to his family. Chief Buchanan noted Hodge left the force in good standing. The board unanimously hired Hodge back to the police force.

The next agenda item was hiring a police officer at the recommendation of Police Chief Reynard Buchanan. Anthony Judson (A.J.) Hodge had been a Humboldt policeman from March 2016 until July of 2019 when he left to work with the Crockett County Sheriff’s Department. Hodge lives in Crockett County and said he and his wife had a new baby. He wanted to be closer to home.

Now he wants to come back to Humboldt, where he was raised and attended school.

Chief Buchanan said Hodge left on good standing and he is eligible for rehire. It was noted that Hodge has already passed the police academy and would not have to get re-certified. He was hired unanimously.

The final agenda item was discussion on Air B&Bs in the city. Alderman Pruett asked to have this on the agenda.

Mayor Sikes said he asked city attorney Randy Camp to draw up an ordinance to set rules and guidelines for Air B&Bs in the city. He noted the city had spent a lot of money in attorney fees to research and draw up the ordinance.

Camp showed a large stack of documents used to draw up the ordinance and said it would be much, much more to finalize an ordinance.

Sikes said he loves Air B&Bs and welcomes them to Humboldt.

Pruett asked if Warrington has a city business license. Warrington said she does not.

“If you pay business taxes, why don’t you have a business license?” Pruett asked Warrington.

Again, it was noted Air B&Bs are regulated by the state, not cities or counties.

Pruett still believes Air B&Bs should be required to have a business license.

Alderman Don Graves said he thinks it’s a win-win for the city having Air B&Bs.  He said people are spending money here. It was noted that people operating them fix the properties up nice, raising property values not only on their property but properties surrounding them.

Pruett said he has received complaints of noise and people drinking beer on the porch. Graves replied that he drinks beer on his front porch too.

The Sands, who own Magnolia Manor, a bed and breakfast in downtown Humboldt, said they list their property for bookings on Air B&B but they are a different business. They do have a city business license. Mrs. Sands said they approve having Air B&Bs in the city and the surrounding area because they provide a service not being offered elsewhere.

Mr. Sands wondered if there was a police log of the complaints Pruett spoke about.

After much discussion, Mayor Sikes asked to close the conversation and move on.

Since the agenda item was discussion only, no action was made on moving forward with creating an ordinance for Air B&B guidelines.