TYSON PROCESSING PLANT – Three of Tyson’s top management members (from left) Tom Sanders, Tom McCue and David Corvin, stand on the hill with the Tyson processing plant in the background. Construction has been underway for over a year but the project has been delayed due to rain, wetlands and other factors with the opening projected for April 2021. McCue is the complex manager and is over all three Tyson operations—the feed mill, processing plant and hatchery. Sanders is the processing plant manager and Corvin is the live production manager at the hatchery.

When Tyson announced they would be opening a new processing plant in Gibson County in November of 2017, their target date to open was late 2019. Along the way, a wetland was found, also architectural and design changes to the building were made that pushed the projected date to late 2020.

But Mother Nature threw a monkey wrench into the plans. In 2019, the area recorded the wettest year on record. When 2020 arrived, new records were being set for the amount of rainfall.

CHICKENS ENTER – Truckloads of live birds will enter underneath this canopy where the chickens enter the processing plant. When the plant is fully operational, they project to process 2.5-million birds per week.

CHICKENS EXIT – These truck bays will be where the finished tray packs of fresh chicken, boxed for shipping, are loaded into cooling truck and shipped to area stores.

This slowed construction due to concrete pouring coming to a halt or slowed down immensely. Concrete workers could only work during dry days and  often times no concrete was poured for long stretches of days.

Tom McCue, complex manager for the Gibson County processing plant, feed mill and hatchery, said the new target date is April of 2021. He expects to have first group of team members in for training at that time and be operational within a few weeks. Once the team is trained and the plant is producing tray packs of fresh chicken, more team members will be added. 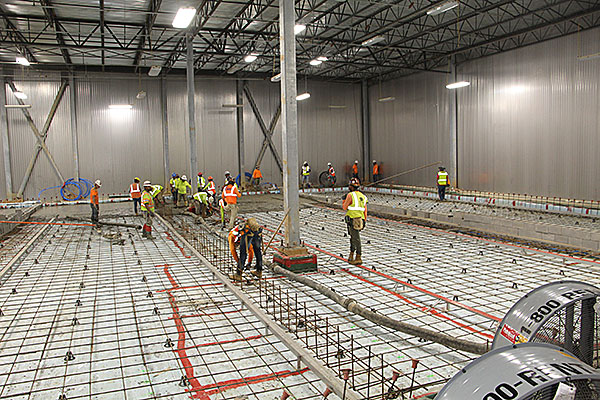 POURING CONCRETE – This large area in the Tyson processing plant has dozens of workers pouring a concrete floor. At any given time on the construction site, upwards of 200 workers people are performing various jobs of the construction process.

“We hope to be at full capacity within a year and a half of opening,” said McCue. “That will be 600 to 700 team members per shift, running two shift. Every night, (third shift) everything gets cleaned and is ready for the first shift.”

When operating at capacity, the Humboldt plant is projected to process 1.25 million birds per week.

As of last week, the bulk of the construction of the main processing plant structure was complete. But concrete is still being poured, steel beams are going up in certain areas and insulated walls are being erected. There is still much work to be done on the 365,000 sq.ft. building. 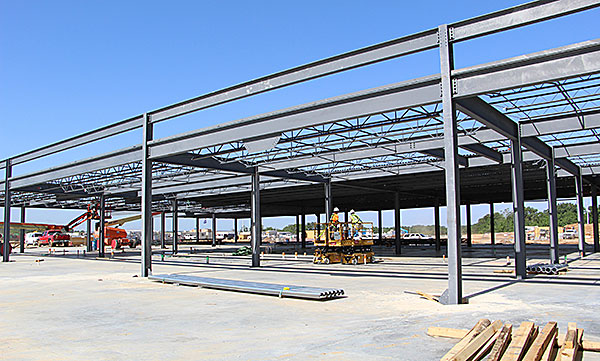 OFFICES – These giant steel I-beams make up the skeleton of will be the Tyson offices. Adjacent to the offices will be the team member entrance, a break room and locker area.

Tyson officials had hoped to have the concrete finished by now. The massive concrete pads surrounding the building used for truck traffic was among the first work performed. These concrete pads became staging/storage areas for building materials, cooling systems, and other equipment and machinery used for construction.

At the processing site, a 1.5 million gallon water tank is under construction, Tyson’s water treatment project is underway, and the truck shop and fueling station are close to completion.

McCue said they are projecting the main building to be ready to begin installation of the processing and packaging equipment by August.
Inside the building, cooling systems are being installed, wall panels are going up, concrete is still being poured and utilities are going in. On any given day, over 200 workers are on site doing dozens of jobs in the construction phase.

TRUCK STOP & FUELING STATION – Tyson will have its own fueling station and truck maintenance shop. The fueling station (left side with yellow pylons) will be used by all Tyson trucks. The truck shop will do maintenance and repairs on the fleet. Also shown is the check in booth at the truck entrance to the processing plant. The dirt path between the booth, and the truck shop/fueling station will be the main road coming into the complex and will be named Tyson Blvd.

McCue described the process of how the plant operates. Trucks bring in live chickens. Birds are then transferred onto process lines. Practically every part of the chicken is used, either for meat, processed meats or pet food products.

The whole chicken used for meat is transferred into the next processing area. Here, different processes are used for the various types of fresh chicken that are purchased in stores. Some will be de-boned, while others will be divided into different pieces, such as breasts, wings, thighs, legs, quarters, etc. This is where the largest percentage of team members work. Approximately 325 people per shift work in this department. 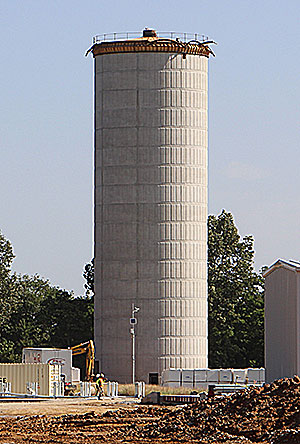 From there, the chicken is ready to be packaged into tray packs and boxed for shipping.

Working with fresh meat requires much of the processing areas to stay cool or even cold. The main processing area is kept at 50-degrees. The staging area where boxes are ready to be loaded on trucks is kept at a chilly 28-degrees. Boxes of fresh chicken meat are loaded onto trucks for delivery.

The main road leading to the Tyson processing plant is under construction. TDOT is funding construction of the road, which will be named Tyson Blvd. McCue said there will be two entrances for traffic on Tyson Way—one for office and plant team members, and one for all trucks, which includes delivery or supply trucks from UPS, FedEx or any other carriers.

All Tyson trucks, whether hauling hatched chicks, eggs, feed or fully-grown chickens are washed after each load. Each truck is washed in a special bay at the truck shop. Cleanliness is imperative for raising healthy chickens and processing them for consumption.

Both the feed mill and the hatchery are merely weeks away from being operational. Some team members are already on the job at both sites.

With the potential of 1,600 new jobs, Gibson County and the surrounding area job seekers have been waiting for Tyson to begin operations. Unfortunately, design changes and massive amounts of rain have postponed the opening. But those jobs are on the horizon.