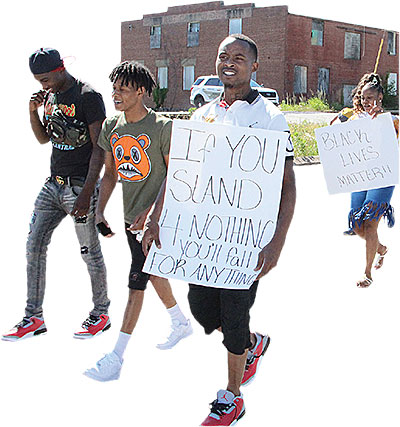 PEACEFUL MARCH – Troy Agnew (front holding sign) leads a group of peaceful protestors last week as they march from the 6th Street Park to Morning Star Baptist Church, and then back to the park. The group of close to 20 wanted their voices heard in response to the recent death of George Floyd at the hands of police officer Derek Chauvin in Minnesota.

A group of people gathered together on Monday, June 1 to have their voices heard after the horrific death of George Floyd in Minneapolis, Minn. and others before him at the hands of police. Many African Americans across the country are holding peaceful protest after Floyd’s wrongful death, where officer Derek Chauvin has been charged with third degree murder and second degree manslaughter.

A group of 20 or so people met at 6th Street Park Monday afternoon. Some of those participating are relatives of the late Roy “Lil Roy” Glenn Jr. who died from a gunshot wound from former Humboldt policeman Paul Carrier in 2009.

Troy Agnew and Schrita Powell were among those leading the peaceful march. Agnew said he was tired of African American men being shot and killed by white police. He said this has to stop. Agnew carried a sign saying, “If you stand 4 nothing you’ll fall for anything.” Agnew wanted his voice to be heard and needed to march peacefully.

Other signs held by marchers stated, “I can’t breathe, RIP George Floyd”, “RIP Roy Glenn Jr. 2, 2009”, and “Black Lives Matter”.
Agnew said black lives matter, all lives matter. He believes all people are equal no matter what color they are. He wants all people to be treated equally.

PREPARING TO PROTEST – Schrita Powell and Troy Agnew (upper photo, left) offered a few words to the news media last week from 6th Street Park, the location of a peaceful protest sparked by the death of George Floyd by a white police officer. Both Powell and Agnew are infuriated by police brutality towards African-Americans and say it must stop.

Powell had words of disgust for the treatment of African Americans by police. She noted that all police are not bad, many are good people. She said Humboldt has lots of good policemen on the force.

As the group left the park, they headed toward Front Street, on to Mitchell Street to Morning Star Baptist Church, then headed back to the park. Humboldt police were on hand to escort the group in front and behind the group of protesters for their safety as they marched down the streets. Cadences of “Black live matter” and “What do we want? Justice!” could be heard.

Some people driving down the road honked their horns in support of the march, some waving their arms from the car windows.

There was never a time when the group of peaceful protesters showed any aggressiveness or violence like some protests as seen on national television news. Instead, this group respectfully honored those who lost their lives due to police brutality and want changes made to stop the senseless killings.

TAKING TO THE STREETS – The group of demonstrators take to the streets as they march for justice and equality last week. Around 20 or so peaceful protesters marched from the 6th Street Park, to Front St., then down Mitchell St. to Morning Star Baptist Church, before returning to the park.