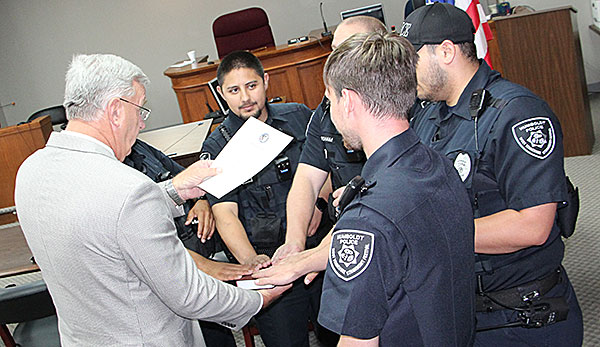 HANDS ON BIBLE – Humboldt Mayor Marvin Sikes asked five recently hired police officers to place their hands on the Bible as he administers the oath to these newest members of the Humboldt Police Department. Sikes used the same Bible, which was used when he was sworn in as mayor, both times.

It was a special day for five of Humboldt’s finest last Thursday. Five of the newest Humboldt police officers took part in a ceremony, taking the oath to protect and serve the citizens of Humboldt.

The ceremony took place in the courtroom of the Humboldt Municipal Building. Most of the officers being sworn in had family members on hand to witness the celebration. Family members memorialized the event with pictures and videos of the swearing in ceremony.

Humboldt Mayor Marvin Sikes had the honor of administering the oath to the new officers. Mayor Sikes told the policemen and their families that he was using the same Bible used when he was sworn in as mayor both times. The mayor said he uses the same Bible for all swearing in ceremonies, which make if even more special.

Those taking the oath were Jeremy Douglas, Roberto Garcia, Devin Grisham, Bernardo Lemus and Seth Shewmaker. Another officer, Michael Santiago, was unable to attend and will be sworn in at a later date.

Mayor Sikes noted that the city has a good police department. He welcomed these newest recruits and invited them to get out and meet Humboldt’s citizens.

Both Mayor Sikes and Chief Buchanan plan to hold these types of celebration more often than once a year as more officers come onboard the Humboldt Police Department.