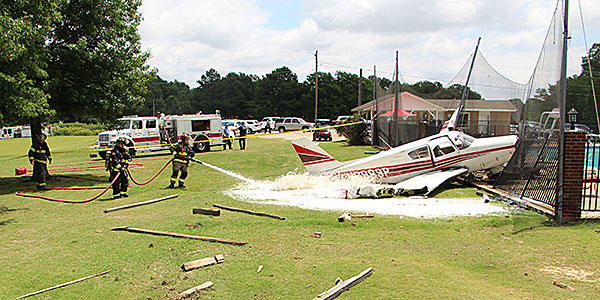 SPRAYING FOAM – Humboldt fire fighters saturate the ground with AFF Foam after a small fuel leak was discovered coming from this airplane that crashed last Friday. The plane had just taken off when it began having mechanical issues, forcing the pilot to make an emergency landing at the Humboldt Golf & County Club. The aircraft clipped some wooden posts before plowing into the swimming pool fence.

An accident that could have well been fatal last Friday morning ended with a good outcome. An airplane made an emergency landing within yards of the airport.

Humboldt Fire Chief Chester Owens said they received the call at 11:34 a.m., Friday on an airplane crash at the Humboldt Golf & Country Club. Dozens and dozens of first responders were onsite within minutes.

Chief Owens said there were two occupants in the airplane and both walked away uninjured. The names of the occupants have not been released until FAA officials are onsite and the investigation underway.

Apparently, the airplane had just taken off from Humboldt Municipal Airport when the aircraft began to have problems. Chief Owens said it is believed to be an engine failure on take off but until a thorough examination is performed, the cause of the crash is still under investigation. 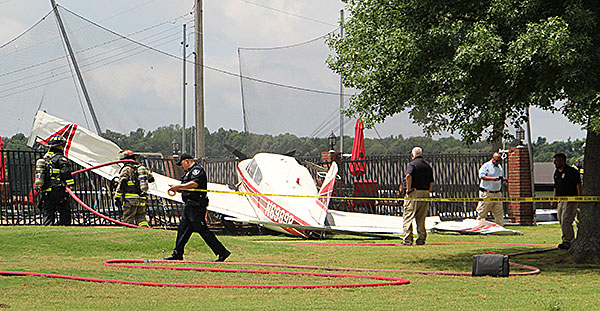 TAPING OFF THE SCENE – Humboldt police and firemen secure the site of an airplane crash last Friday at the Humboldt Golf & Country Club. Luckily the pilot and passenger walked away unscathed. Three lifeguards scrambled out of the way as well and were shaken up but unharmed.

Once the airplane began to fail, the pilot looked for a safe place to put the plane down and the country club was the only place in sight. As the plane landed, it struck some wooden posts and crashed into the fence around the swimming pool.
Officials on the ground said there were three lifeguards in the pool area at the time of the crash. None were injured but they were shaken up from the horrific accident.

The nose and propeller of the plane crashed through the fence. One wing was intact but bent way out of shape and had a gaping rip mid-way that looked as if it had struck an object, perhaps one of the wooden posts. The other wing had severe damage with the end mangled into multiple pieces. The rear section of the craft seemed to be unharmed.

Chief Owens said this crash had a good outcome with no injuries. Damage to the Country Club grounds was minimal except for the swimming pool fence.

After the plane had been on the ground and the Humboldt Fire Department was on the scene, a small fuel leak was discovered. Fire fighters sprayed AFF Foam on the ground surrounding the leak to contain any petroleum that might be leaking and potentially causing a fire.

What could have been a tragic, even fatal, accident for two occupants and three bystanders, turned out to be a miracle with everyone walking away unscathed. Unfortunately, the airplane and the Country Club property can’t say the same. But even with the damage done, it could have been much worse.

PLANE CRASH – This single engine airplane lays up against the fence surrounding the Humboldt Golf & County Club swimming pool after making an emergency landing shortly after taking off from the Humboldt Municipal Airport. Luckily no on was injured in the crash.