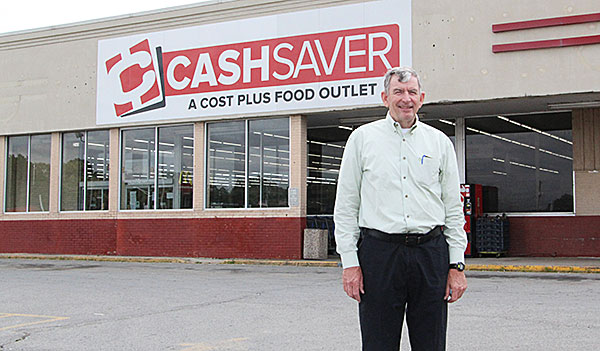 NEW OWNER – Local grocery store mogul, Joey Hays of Dyer, Tenn., recently purchased the Cash Saver store in Humboldt. Hays is currently in the process of cleaning the building, restocking shelves and plans to be open to the public this Thursday. Hays said he’s excited about his new store in Humboldt and the potential it has.

A Humboldt business that previously had ownership out of state now has a new owner that is local. Gibson Countian Joey Hays has purchased Cash Saver grocery store located in the Humboldt Plaza Shopping Center.

Hays has been in the retail grocery business for decades and said he is excited about opening another local store in the county. Hays now owns five grocery stores in Gibson County. Along with Humboldt Cash Saver, he has four Food Rite stores with two in Trenton, one in Dyer and one in Kenton.

Hays purchased another store, this time with a partner in 1983 in Kenton. The following year, Hays bought his partner’s share and became sole owner.
In 1993, Hays rebuilt his Dyer store and in 2000 he began building his grocery empire with multiple stores in Tennessee and other states as well.

Of Hays’ 17 grocery stores, all are Food Rite except for Cash Saver in Humboldt and in Henderson. Hays noted the Cash Saver concept of a low cost price with 10-percent added at checkout will remain the same.

One of the best parts of Hays’ new purchase is that the entire staff has been offered to keep their jobs. Hays anticipates growing the Humboldt business to be bigger and better and hire more staff.

“This is a terrible time to open a store,” Hays said of the timing due to corona pandemic. “Meat pricing has gotten ridiculous.”

Hays said the purchase was finalized over the weekend and he has closed the store until Thursday, May 21.

“We’re going to clean from top to bottom, stripping and waxing the floors, new cash registers, remerchandising and filling with products,” Hays said of the short closure. “We’ll have the same brands. The freshness and display will be better.”

One thing shoppers can expect is fresh meats. Customers want meat being cut in the store. Hays plans to have a meat department of freshly prepared meats.

“We’re thrilled to learn that Joey Hays has purchased the Cash Saver in Humboldt,” said Amanda Love, executive director of Humboldt Chamber of Commerce. “It’s always nice when a new business enters our market, but when that business is being guided by a team with a proven track record of quality food – such as Hays’ Food Rite credentials – it’s truly exciting.”

For those who shop regularly at Cash Saver, Hays asks you to continue and says people will notice a big difference in the cleanliness and in the stocked shelves. For those who haven’t shopped there, Hays invites you to give them a try.

“We wish Mr. Hays and his team all the luck in the world, and hope that the Humboldt Chamber of Commerce can work with him soon,” director Love added.

Be sure to check out the Cash Saver insert each and every week in the Humboldt Chronicle to see what’s on sale and the bargains offered.

“I’m excited about coming to Humboldt,” Hays said of his newest store. “This store has so much potential.”