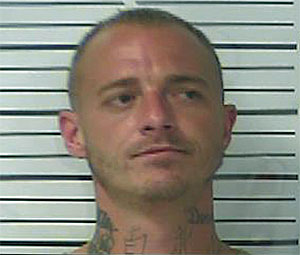 An investigation by special agents with the Tennessee Bureau of Investigation into a fatal fire in Gibson County has resulted in the arrest of a Humboldt man.

David Glynn Riggs has been charged with reckless homicide.

On May 3, first responders with the Humboldt Fire Department and Humboldt Police Department responded to a call of a smoke odor at an apartment complex on Old Gibson Road in Humboldt. Crews discovered a fire in one of the apartments and extinguished it.
In the process, the body of a victim believed to 84-year-old Perry M. Boling was located in the residence.

TBI special agents, along with accelerant detection canine Wrigley, also responded to the scene, along with deputies with the Gibson County Sheriff’s Department. During the course of the investigation, agents developed information that indicated Riggs was responsible for starting the fire.

According to the arrest warrant, after investigation into the cause, it was learned Riggs did cause the fire by his reckless behavior in the residence.

Humboldt Fire Chief Chester Owens said the fire department received at call at 1:52 a.m. Sunday morning from a resident of the apartment complex about a smoke scare. Firemen did not see any visible smoke or fire as they arrived. Once on the scene, they did see fire and smoke.

Owens said the fire was extinguished in five minutes. While searching the scene, fire personnel found Boling, got him out of the building and performed CPR but were unable to resuscitate. Following protocol, TBI was notified and called to the scene.

On Sunday, Riggs was booked into the Gibson County Correctional Complex for reckless homicide. No bond is set at this time.

Riggs has other pending charges against him from previous cases and several misdemeanor convictions as well.