Hatchery could be ready by May 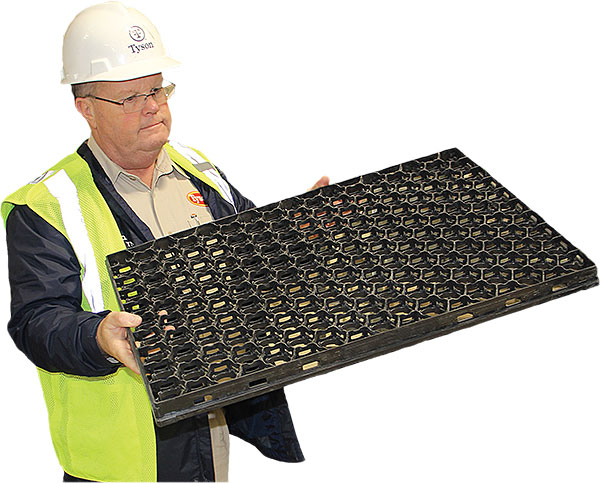 EGG TRAY – Tom McCue, complex manager for Tyson Foods, shows one of the egg trays used to hold chicken eggs. Each tray holds 162 eggs and fits into racks that hold 34 trays for a total of 5,508 eggs per rack.

May in Humboldt is always all about strawberries. But June this year might be all about the chirping of baby chicks. The Tyson Foods hatchery should be ready to operate by the end of May and possibly have chicks as early as June.

Tyson Complex Manager Tom McCue said the hatchery is coming along with a target date of late May to be ready. The hatchery is located in the Humboldt Industrial Park, along with American Woodmark and FedEx.

“We could possibly be in production in June to provide chicks for other Tyson locations,” McCue said of the hatchery. “If not, we’ll be hiring in October and start production in December.”

December is the target date to open the Tyson Foods poultry plant in the Gibson County Industrial Park.

Some positions are being filled now with others in the upcoming months. Maintenance workers and management positions are open. Currently, hiring is still in the early stages with only a handful of positions to fill. But closer to completion dates for all three Tyson projects, more and more jobs will become available.

Upwards of 100 maintenance workers will be needed for the processing plant, the hatchery and the feed mill in Fruitland. McCue said there is a complete schedule of dates when each position would need to be filled.

McCue said if the hatchery opens in June, Tyson will begin hiring in March in order to fill the positions and provide training that goes along with each job. If the other Tyson facilities do not need Humboldt chicks, hiring should begin in October for the processing plant.

For the hatchery, there are 13 breeder farms with three houses each (39 total breeder barns) to supply the production needed. Local poultry producers partner with Tyson in this process.

Tyson trucks will pick up eggs twice a week from each farm—either on Mondays and Thursdays, or Tuesdays and Fridays. At the farms, eggs are loaded on black trays into tall (refrigerator size) rectangular racks. Each tray holds 162 eggs and each rack holds 34 trays for a total of 5,508 eggs per rack. Data is kept on every rack of eggs to determine which barn the eggs come from, the date and other data, from the time the egg enters the building until the chick leaves at the other end of the facility. 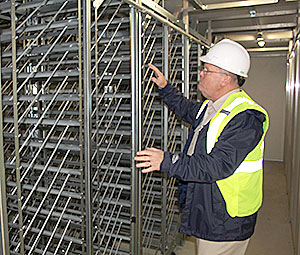 INCUBATION ROOM – Tyson’s Tom McCue is inside one of the setter incubation rooms where eggs will be stored for 19 days. The racks inside the incubators have an automated system that rotates the trays at different degrees so the eggs do not sit in the same position. This mimics a mother hen that will turn her eggs in the nest.

When the eggs come off the trucks, they are transferred to a holding area before being moved into setter incubator rooms. These rooms are equipped with ventilation, both heating and cooling, and an automated system that will tilt the trays one direction, and later tilt it the same amount the opposite direction. This mimics a mother hen rotating her eggs in the nest.

The eggs are then transferred from the egg trays to the hatch baskets and moved to hatcher incubation rooms to complete the incubation and hatch process for two days. It is during this time the majority of the eggs will hatch.

Next, the chicks are moved to the harvest room. A conveyor is used to separate the chicks and the eggshells. The shells are vacuumed into a hopper and used elsewhere as ingredients for other products.

The final step for the baby chicks is the handling room where they are loaded into farm baskets—100 each. The farm baskets are loaded on trays and rolled in the trucks to be delivered to the 55 broiler farms.

At the end of each process, the racks and trays are washed thoroughly using heavy-duty washers to maintain cleanliness. The incubator rooms are cleaned after each brood. The conveyors and other equipment are cleaned at the end of each day.
There are four, six or eight broiler barns on each farm where the chicks are raised for 50 days into full-grown chickens. Each barn holds 38,000 birds to supply the processing plant.

McCue said start-up on the hatchery (either June or October) would probably be around 15-percent capacity at first. But even at start-up and minimal capacity, it will still demand a full workforce crew to operate, just not on the large scale once it is at full capacity. McCue expects to be running at full capacity a year and a half from start-up. The hatchery will have approximately 20 to 25 team members. Most will be daytime workers when the trucks are running, delivering chicks or bringing in eggs.

With so many chicks being incubated at a time, there will be someone at the facility 24 hours a day, seven days a week, 365 days a year, to ensure all the machinery is operating correctly. The hatchery also has a monster of a generator that is capable of running the entire plant in case of an electrical outage.

“We have to have someone here at all times,” McCue said to assure eggs are cared for. “The night staff will also do some minor maintenance as well.”

McCue said the hatchery is employee friendly as well, with a big break room with food and drink machines. When team members arrive, there are two locker rooms, one for men and one for women. Tyson team members will change into scrubs for bio-security reasons. McCue compared the hatchery to a hospital nursery, only with baby chicks. The same care and precautions are used.

TYSON HATCHERY – The 100,000 sq.ft. Tyson hatchery is nearing completion. Workers are installing the final pieces of mechanical equipment. Tyson Complex Manager Tom McCue said the hatchery should be ready for operation by the end of May, but operations to provide for the poultry plant will begin in October.

So in a few months, Tyson trucks will be busy moving chicks. And in the back will be the sweet sounds of baby chicks, which in turn is creating jobs and helping Gibson County’s economy grow and grow—all while raising healthy, nutritious, delicious chicken for your dining table.