Board will seek applications on their own 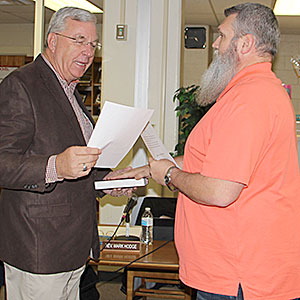 HODGE TAKES OATH – School board member Mark Hodge (right) takes the oath of office prior to Thursday’s Humboldt School Board meeting. Hodge was in Nashville attending school board training during the January board meeting and unable to be sworn in with other board members. Humboldt Mayor Marvin Sikes administers the oath to Hodge.

The Humboldt School Board meeting last Thursday evening had its ups and downs. But for the most part, the meeting was productive and was civil.

Prior to the beginning of the meeting, Humboldt Mayor Marvin Sikes administered the oath of office to newly elected school board member, Mark Hodge. Hodge was elected to fulfill the remainder of the term for his ward in November. He was unable to attend the January meeting due to attending school board training in Nashville.

Perhaps the biggest item on the agenda was discussion of the superintendent search.

There were a couple of items on Thursday’s agenda some members thought were controversial. The agenda already needed to be amended to add a new line item for bids for Humboldt Jr./Sr. High School’s new vestibule wall. That amendment passed unanimously.

Chairman Leon McNeal said he wanted two items removed from the agenda. One item was discussion on the school board’s attorney/client meeting that took place behind closed doors on Monday, January 27. The other item to delete was a request from Hodge to make a post election statement.

Hodge asked fellow board members why it is so important to not let the public know what is going on. Board member Valeria Wedley replied saying it is a dangerous spot to tread on. She noted that discussing the meeting could become “you said, he said, she said” and the information was only for the board and the attorney.

The second item McNeal was seeking to delete was Hodge’s request to read a post election statement.

“Why is my request being removed?” Hodge asked.

Wedley said she did not know what a post election statement is and added it has nothing to do with the board.

Hodge replied that it was words to the public from one of the elected officials.

McNeal was confused as to why it was on the agenda any way.

“He’s supposed to bring it to the chairman. He did not,” McNeal said. “We can’t have controversy.”

Hodge then stated if there cannot be controversy, why is discussion on the superintendent search on the agenda since that is very controversial.

Hodge also asked who asked for the resource officer to be on the agenda.

McNeal said he did.

“So the chairman can add (to the agenda) but a board member can’t?” Hodge asked.

On both votes to amend the agenda and remove the two items, they passed 3-1 with McNeal, Wedley and Terry Johnson for to amend, and Hodge voting against. Board member Wayne McLemore did not attend.

When the superintendent search discussion began, Hodge asked the board, “How are we going to do it? Are we going to use TSBA (Tennessee School Boards Association)?”

Wedley noted TSBA is not cheap. She was not sure but thought the lowest package TSBA offered starts at $6,000. Wedley also added that a superintendent search is not covered in their dues.

Hodge asked if the board is as qualified as professionals who help schools across the state.

Wedley said if the board reaches a stumbling block, they may need TSBA but that could be decided then if they are needed.

“Last time, we let TSBA help,” McNeal said. “But I learned. I will never do that again.”

Next McNeal referred to a couple of school board policies regarding the qualifications of superintendent candidates and the school board’s duty to find applicants.

“Now, they’re gonna meet qualifications,” McNeal said of the prospective superintendent applicants.” We interviewed them in this room (HJSHS library) and we can do that again.”

“I appreciate your knowledge of the policy,” Hodge said. “We, as a board, need to remove our emotions. I’m concerned about not having an outside entity to help us. The goal is for our schools not to survive, but to thrive. I would love to have somebody get us a handful of applications.”

“We don’t have to pay thousands of dollars to get a stack of applications,” McNeal said of TSBA’s service. “All they do is search. We can do that. We can take our time and find the right person to lead our schools.”

Wedley has concerns of the candidates TSBA would select and who their top choices would be. She noted TSBA may not ask if a candidate has dealt with a school system such as Humboldt.

“We need someone to rule with a strong arm,” Wedley added, “and lead these children.”

Hodge said he agreed with chairman McNeal about the board taking its time to find the right candidate. He also praised Wedley for the way she articulated herself during discussion.

Another agenda item was the aforementioned school resource officer report. SRO Roy Hudson of the Humboldt Police Department addressed his concern about the 2018-19 school handbook.

“I want to talk about safety,” officer Hudson said as he handed out foam earplugs.

Hudson said wearing ear buds is the same as wearing earplugs. He said the handbook allows students to wear ear buds in the hallway. Hudson noted the previous handbook did not allow for ear buds at all.

Hudson asked the board to reconsider and go back to the old policy.

Dr. Versie Hamlett, director of schools, said she has spoken with Police Chief Reynard Buchanan. She said the chief thinks one ear bud is not an issue.

Officer Hudson noted ear buds come in pairs and believes students will use both instead of just one side.

McNeal said he would check with other school districts to see what their policy states.

During Dr. Hamlett’s report, she recognized the three teachers of the year, voted on by their peers. They are Tiffany Pettigrew for grades pre-k through fourth, Chandra Mclin for grades 5-8 and Jason Wiles for grades 9-12.

Dr. Hamlett also said during her report that teachers are currently looking over sample textbooks that meet criteria from the state for the next school year. 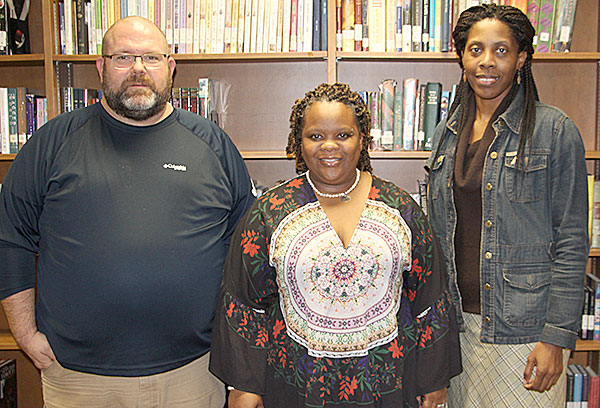 TEACHERS OF THE YEAR – Three teachers with Humboldt City Schools were recognized during the school board meeting last Thursday night as Teachers of the Year. Humboldt superintendent, Dr. Versie Hamlett, said the teachers were voted by their peers. They are (from left) Jason Wiles for grades 9-12, Tiffany Pettigrew for grades pre-k – 4 and Chandra Mclin for grades 5-8.