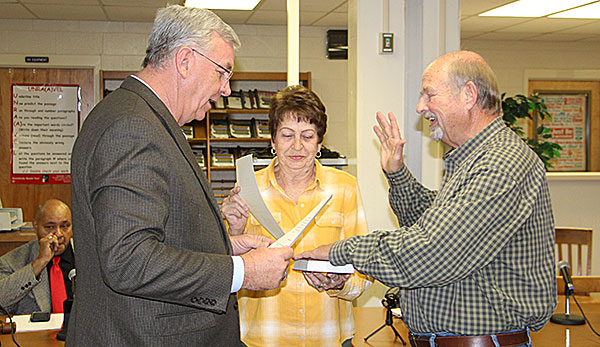 Mayor Marvin Sikes administers the oath of office to school board member Wayne McLemore, joined by his wife, Peggy, who holds the Bible. 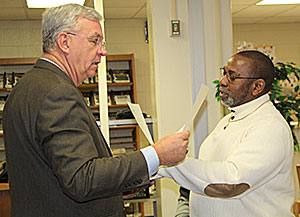 Mayor Marvin Sikes administers the oath of office to school board member Leon McNeal . Both McNeal and McLemore were re-elected in November to serve 4-year terms.

With three school board members winning elections last November, their new term begins in January. Two of the three members were sworn into office last Thursday evening prior to the regular school board meeting.

Mark Hodge was unable to attend the meeting since he was in Nashville attending the TSBA (Tennessee School Boards Association) new board member training session. State law mandates school board members attend training. Hodge will be officially sworn in prior to the February 6 meeting.

During the first meeting of every year, the first item of business for the Humboldt School Board is to elect a board chairman, vice-chair and TLN (Tennessee Legislative Network) representative.

Chairman Terry Johnson opened the floor for nominations. He then nominated Leon McNeal for chairman. McLemore nominated Hodge. The board voted, resulting in a 3-1 vote electing McNeal as the new board chairman. 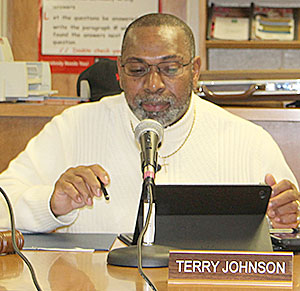 As soon as the vote was taken and McNeal had been elected, Johnson picked up his tablet and belongings. He looked at McNeal and said, “It’s all yours.” Johnson and McNeal exchanged seats at the table.

With McNeal at the helm, nominations for vice-chairman was next on the agenda. McLemore nominated Hodge to be vice-chair. McNeal nominated Johnson. After the vote, Johnson was elected as vice-chair, 3-1.

The final school board position was the TLN representative. This position is key to keep school board members abreast of legislation in Nashville regarding changes in the laws or new laws that could effect education in Tennessee. It is the responsibility of each school board’s TLN rep to keep the other members updated on happenings at the state capitol.

McNeal nominated Valeria Wedley for the position. There were no other nominations. Wedley was elected 3-1 with McNeal, Johnson and Wedley voting ‘yay’ and McLemore voting “nay’.

With all elections final, McNeal moved on with the regular agenda. The first item on the agenda was to approve the 2020 school board meeting dates. Board policy states that Humboldt School Board meetings are to be held on the first Thursday, after the 5th day of the month. The policy does allow the board the option of changing dates due to holidays or other events.

The final agenda item was the first reading of four board policies updates. The first reading does not require a vote.
Wedley urged the board to take time, read over the policies and research them closely.

“This year will be a year of policies for reviewing and changing policies,” Wedley said. “We need to take it serious.”
A second reading next month of the four updates will require a vote in order for the updates to take effect.