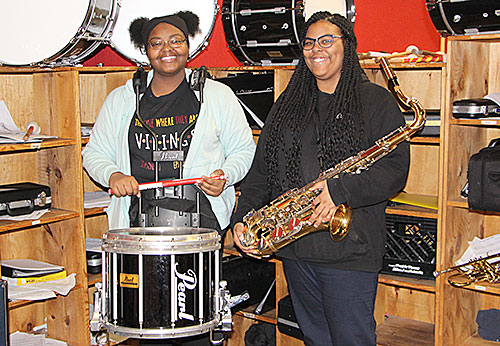 THINKING CALIFORNIA – GeNya’ Randolph (left) and Hope Pipkin are two juniors in the Humboldt Jr./Sr. High School band and will be seniors next year. They are excited about performing as part of the Gibson County Mass Band in the 2021 Tournament of Roses Parade in Pasadena, Calif. on New Year’s Day. Fundraising has begun to raise money for the trip.

When it was announced a few weeks ago that the Gibson County Mass Band had been selected to participate in the Rose Bowl’s Tournament of Roses Parade a few weeks ago, excitement quickly spread across the county. Now, fundraising projects have begun to fund the trip.

Last week, Humboldt Band Director Heather Glenn-Hoekstra and Assistant Director Delaney Naffzigger talked about funding, fundraising and how the Mass Band actually got invited to participate in one of the biggest, most prestigious parades in the United States.

The Gibson County Mass Band is a joint venture comprised of all five high school bands in the county—Humboldt, South Gibson, Milan, Trenton and Gibson County.

Tate texted all the band directors and said he was looking into applying to march in the Rose Bowl Parade in Pasadena, Calif. He said there was about a 5-percent change of being selected.

Glenn-Hoekstra said all the directors were in, not really expecting to be among the 5-percent chosen. When the day and time of the announcement came, the directors did not hear from Rose Bowl officials. Then, 30 minutes later, they got a call saying, “Congratulations, you’ve been selected.” The Mass Band will be one of the 13 bands performing in the Tournament of Roses Parade.

After a band directors meeting, all five agreed this was an opportunity that could not be passed up. They first began researching tour companies that specialize in these type of trips that include air travel, ground travel once there, hotel rooms and meals.

Tate received quotes from several agencies and after some haggling, selected Performing Arts Consultants based out of New Jersey. The estimated cost is $900,000. This sounds like a lot of money, and it is, but the band directors think it is doable with support from the businesses, industries, individuals and former band students.

On Monday, December 2, a meeting was held at the Church at Sugar Creek that included the directors, school administrators, band students, parents and other supporters. Hundreds attended the meeting that filled the sanctuary with overflow using the balcony.

The invitation to the Rose Bowl is more than just marching in one parade. There are days worth of activities for the Mass Band. The band and all participants will fly out of Memphis or Nashville (yet to be determined by the tour company) on Sunday, December 27, 2020. There will be chartered buses departing from each of the five schools to the airport.

On Monday, December 28, they will visit the famous Santa Monica Pier and Amusement Park.

Tuesday, December 29, the Mass Band will march in the Disney Main Street Parade at Disney World in Pasadena. After the parade, they will enjoy the park and have park-hopper tickets to go between the two Disney parks.

Wednesday, December 30, the band will perform a field show at Band Fest and then visit the float barn where all the floats for the parade are built. That evening, there is a dinner cruise along the coast.

On New Year’s Eve, the band will visit Knott’s Berry Farms before turning in for the night.

New Year’s Day, it will be rise and shine in the wee hours of the morning at 3 a.m. They will bus to the parade route at 5:30 a.m. for rehearsal time with the parade beginning at 8 a.m. Pacific Time.

The parade route is five and a half miles, more than six times the length of the Strawberry Festival, which is less than a mile. To prepare, Humboldt students have already started exercising to build their stamina.

Since all five schools must participate, a Gibson County Mass Band website (www.roses2021.com) has been created where people can make donations to help fund the trip. The website has a place to donate using PayPal or a credit card. All money donated this way goes directly toward funding the trip. There is also a Go Fund Me link, but 2.9-percent of the donation is deducted as a processing fee, plus 30-cents per transaction.

The single largest donor will have their company logo on the actual uniforms worn while marching in the Tournament of Roses Parade.
The first milestone that has to be met through fundraising is $87,000 to secure two charter airplanes for the trip. The remainder of the funds must be met by November 2020.

There will be between 330 to 350 band students performing—30 from Humboldt, 50 from Milan, 70 from Peabody, and 100 each from South Gibson and Gibson County high schools.

As a warm up, the Mass Band will once again perform during next year’s Strawberry Festival Grand Floats Parade. The band will meet up in Humboldt right after the Teapot Festival at the high school and work on sections. That evening, there will be a dress rehearsal on Main Street where watchers can get a sneak peek of the performance.

All schools will be holding multiple fundraisers to help with the costs. Right now, Humboldt students are holding a donut sale. You can call Humboldt Jr./Sr. High School at 784-2781 for more information.