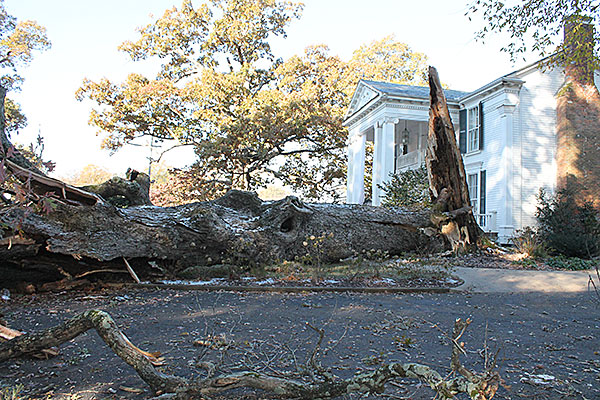 DOWNED TREE – This majestic white oak tree crashed to the ground last week at Twin Oaks. The famed oak tree was thought to be over 300 years old. A remaining twin tree stands tall in the background. A third white oak also stands on the property.

What took over 350 years to create came toppling down in a matter of seconds. A towering, majestic oak tree came crashing down last Tuesday.

Twin Oaks is known for and named after the huge oak trees that flanked each side of the historical antebellum house. Last Tuesday, the massive tree on the right side of the building crashed to the ground. Luckily, the tree did not fall on or damage the house.

Wednesday morning, crews were out in the frigid weather with chainsaws in hand, cleaning up the fallen tree. The tree had hallowed over the years and was a shell of what once was a powerfully strong tree. The base of the tree was almost 20 ft. in diameter. 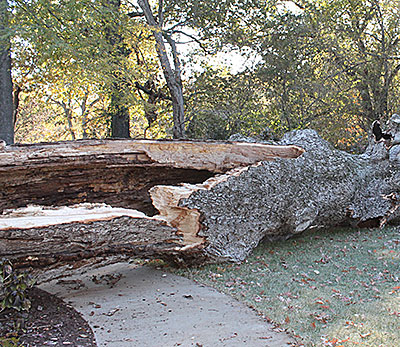 HOLLOW CORE – One of the white oak trees at Twin Oaks lays on the ground after falling last Monday. The hollow core was the demise of this aged wonder.

Two other oak trees of the same age are still standing. A worker on site during the clean up said both of those tree could also be hollow and in danger of falling.

Twin Oaks is listed on the National Register of Historic Places. Construction began in 1853 by J.N. Lannom. The house remained unfinished until 1860 when Moses Senter purchased the stately mansion where he and his family lived. Senter was Humboldt’s first mayor.

Twin Oaks earned its name from the two white oak trees on either side. The house has a rich history and played a role during the Civil War where it was used as a hospital during the Battle of Humboldt.

In 1915, C.W. Rook, who was married to Senter’s granddaughter, purchased the house. Rook was also a Humboldt mayor, as well as a congressman and owner of the Courier-Chronicle (now known as the Humboldt Chronicle).

According to Humboldt historian, John Blankenship, Rook renovated the house’s exterior. He added the large columns at the front and enlarged the porch. He also added the decorative woodwork and the front balcony.

Blankenship said Charlie Couch had the trees at Twin Oaks tested for age in the 1980s. The arborist said they were approximately 300 years old at the time. Blankenship added that the three white oaks as a group were one of the largest in Tennessee.

The house remained in the Senter/Rook family until 2011. At the time, some believed the historic house was in disrepair. There was even talk of tearing it down to the ground. 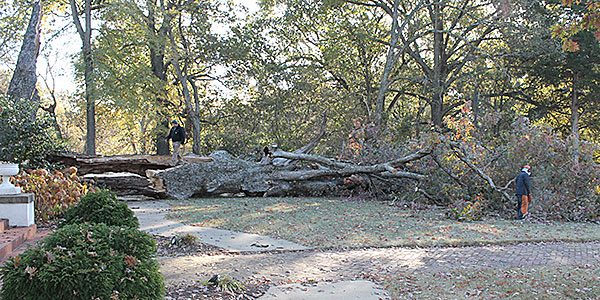 SAWING UP HISTORY – Workers with chainsaws were busy last Tuesday morning cutting up the huge white oak tree that had fallen at Twin Oaks. Over 300 years of history came crashing down, only to become a pile broken limbs and debris.

But Keith and Terrie Hopper thought differently. They purchased the house and completely renovated it. The Hoppers converted into an event venue where numerous weddings, receptions, banquets and other celebrations have been held.

Four years later, the Hoppers sold the house to Karl and Angela Snider. The Sniders also own an event venue in Denmark, Tenn., The Barn at Snider Farms.