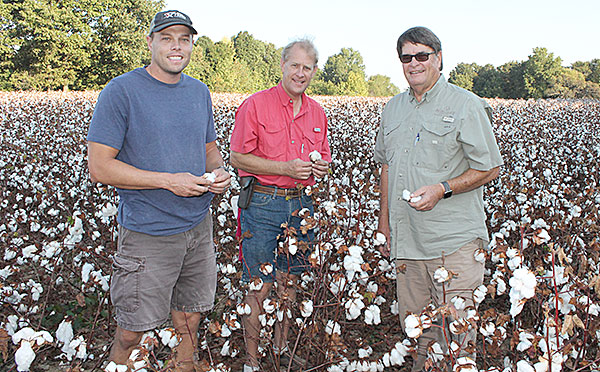 GOOD CROP – Local family farmers (from left) Zac Luckey, Jason Luckey and Ken Luckey are thrilled with expectations of having the best harvest of cotton, corn and soybeans that they have seen in years. The brothers and nephew stopped by one of the cotton fields last week to check on the whites and fiber quality. Frequent showers early on in the growing season, paired with a hot dry September made for ideal weather for their crops.

For local farmers, 2018 and 2019 is the tale of two completely different years. With fall harvest getting underway, the past two years could not have been any more different.

This September, the area had a drought with some places not receiving a drop of rain, while some got a sprinkle or two. Then there were those isolated pop up showers with downpours.

Jason Luckey said last week that this year’s weather was ideal for their crops such as corn, soybeans and cotton. Luckey, along with his brother Ken and nephew Zac, operate the family farm.

“Early on in the year, we were getting a few showers,” Luckey said during planting season. “But it wasn’t a ton of rain. It allowed us to get in the fields. Early rains kept moisture in the ground.”

July of this year had several days with highs only in the 80s and lows in the 60s, which is typically not July weather here in West Tennessee. Luckey said July weather was ideal for fall crops. June and July are when corn crops are setting and growing ears.

Then September hit with almost no rain at all, again ideal weather for fall crops, according to Luckey.

“This has been the best year weather-wise for weight and yields,” Luckey said. “It could be the best corn crop we’ve had in years.”

Soybeans look to be a banner year as well, depending on when and how much rain the respective fields received early in the growing season.

“Early beans” is a term farmers use to describe beans not planted in fields after wheat is harvested. “Wheat beans” or “late beans” are soybeans planted immediately after the wheat is harvest in June.

“Early beans planted in early May come in the same time as corn, around mid September,” Luckey explained. “They are looking good right now. Wheat beans planted in June don’t look as good. They are not as tall or filled out quite as much. The dry weather hurt them but they still look good, just off a little.”

Cotton crops this year are looking much better than last year’s crops. Deluges of rains during the growing and harvest seasons last year not only hurt the yield, but lowered the grade as well. Farmers took a double hit last year.

Luckey said his earlier cotton crop last year was bringing 56 to 57-cents but cotton planted a little later was only bringing 49 to 50-cents. This was mainly due to the grade dropping. He said rain can cause the cotton hulls to stain the cotton.

But with this year’s hot, dry September, Luckey expects yields to be higher and with sunny days bleaching the cotton, the grade should be higher as well.

Luckey said this year’s wheat crop was average or a little above. He said farmers were getting nervous over the winter with all the rain falling in West Tennessee.

He recalled hearing the local weather reports stating there were no stretches of seven consecutive days that did not get rain going back to last October. When he heard the report, Luckey went back to checked and sure enough, there was rain every week. That was until September hit this year and the area went for almost the entire month without rain.

With wheat planting season beginning, Luckey said he would prefer to have a small shower or two once it’s in the ground, but not enough rain to hurt the cotton grade. He said farmers typically plant wheat from around October 10 through Thanksgiving.

The Luckeys use the sowing method for their wheat crops while others “drill” wheat. Both produce the same amount but Luckey said he prefers the no-till method. Many farmers will contract out their wheat planting using fertilizer companies to spread seed and fertilizer at the same time.

“Sowing works best for us but some drill it,” Luckey added. “It’s a preference from farmer to farmer. And it depends on the manpower and equipment.”

The Luckeys, like most all farmers, rotate crops every three to four years. Planting the same type crop year after year is not good for the soil. Certain plants pull certain minerals and nutrients from the ground. Rotating crops allows the soil to naturally replenish those nutrients. Rotation also helps with soil erosion and affects pest populations.

Luckey said the hot, dry September has also held the insect numbers down this year.

“This is the busiest time of the year for farmers,” Luckey said, as corn, wheat and cotton crops are ready to harvest. “It’s been a good year so far. I hope for a beautiful October, just like it’s been so far.”