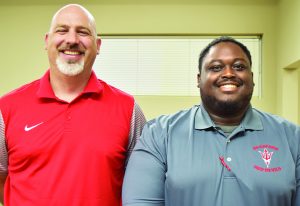 Bradford High School agriculture students and FFA members have a lengthy to-do list after the Bradford Special School District board agreed Sept 23 to purchase a former sale barn with pasture for $17,500.

The barn, located on Alexander Street, needs some tender loving care, but Kyle Gehring, FFA sponsor and agriculture teacher, is excited for the opportunities the property will afford his students.

“Our goal is for our large animal care and veterinary science class to go to the barn during school and learn by hands-on experience,” Gehring said. “They will be in charge of all aspects of the industry with guidance from me.”

The Bradford FFA chapter currently boasts 120 members, but Gehring said the barn would strengthen those numbers.

Before they can put it to use, however, students will help restore the barn, pasture and fencing.

“My students understand it can’t just be me,” Gehring said. “It’ll take a village.”

Gehring said his goal is to open three of the 18 stalls by winter. There is a second barn on the property, but Gehring said it’s a total loss. He hopes to salvage some of the timber to use on the sale barn. He said the property needs to be bush-hogged, and the fence needs repairs. There is money appropriated in the budget for the repairs.

Gehring said he’s working on a FFA grant to purchase lumber and local farmers have expressed their willingness to help with the project. After the barn is refurbished, Gehring’s agriculture program will be ready to expand its programs.

“We will gain all types of species of livestock to teach students how to care for them, as well as how to run a livestock business,” Gehring said.

Dr. Dale Denning, a Bradford High School alumnus and school board member, recalled how busy the former sale barn was in its heyday.

“To see it come back to life and used for something is not a bad idea,” he said.

First SRO – The board met its first School Resource Officer. Sgt. Terrence Clark has been with the Gibson County Sheriff’s Department for 10 years. His dad is the SRO at South Gibson County High School.

“I’m excited to be here,” he told the board. “Everybody has been fantastic.”

“He’s done a great job already just being around the kids, building those relationships,” Paschall said.

Clark will attend SRO training as soon as the sheriff can arrange it, he said.

Volkswagen contract – Director of Schools Dan Black and Transportation/Maintenance Director Mike Henson gave the board an update on the Volkswagen grant contract the district has signed. The grant will provide for four buses over three years. The board has already chosen propane over diesel, and the district will be able to order the first bus on Oct. 15.

Hinson said the district would save about $5,400 per year in fuel and maintenance with the propane bus.

“Teachers thought they were beneficial,” Black said. “A lot of schools are doing their whole schools this way.”

Black said it’s most beneficial to elementary students who are better able to hear their teachers pronounce words and sounds with the systems in their classrooms. His goal is to add a few every year until the entire school is served.

Cell phone – The board voted for principals to receive $900 per year for use of their cell phones. Black said the move is consistent with other administrators.

School board officers – The board elected Dr. Kelvin Moore as its president, Rich Cunningham as vice president and Charles Cowen as Tennessee Legislative Network representative.

STATE of the CITY