After deliberating for weeks over which firm should oversee the renovations at Johnnie Hale Stadium and Milan High School, the Milan Special School District’s Board of Education voted Monday night to short-list two of the bidders, opting not to choose the lowest bid.
A clarification report for the proposals made by the four potential construction managers became the center of the discussion, with some Board members questioning discrepancies in the report. The report was constructed by Finance Director Sharon Petty to give an “apples-to-apples” comparison of the charges outlined in each of the proposals, but due to the differences in the way each firm charged for their services, pertinent information seemed to have been lost in translation.
“There were a lot of different explanations,” said Chairman Will Ownby. 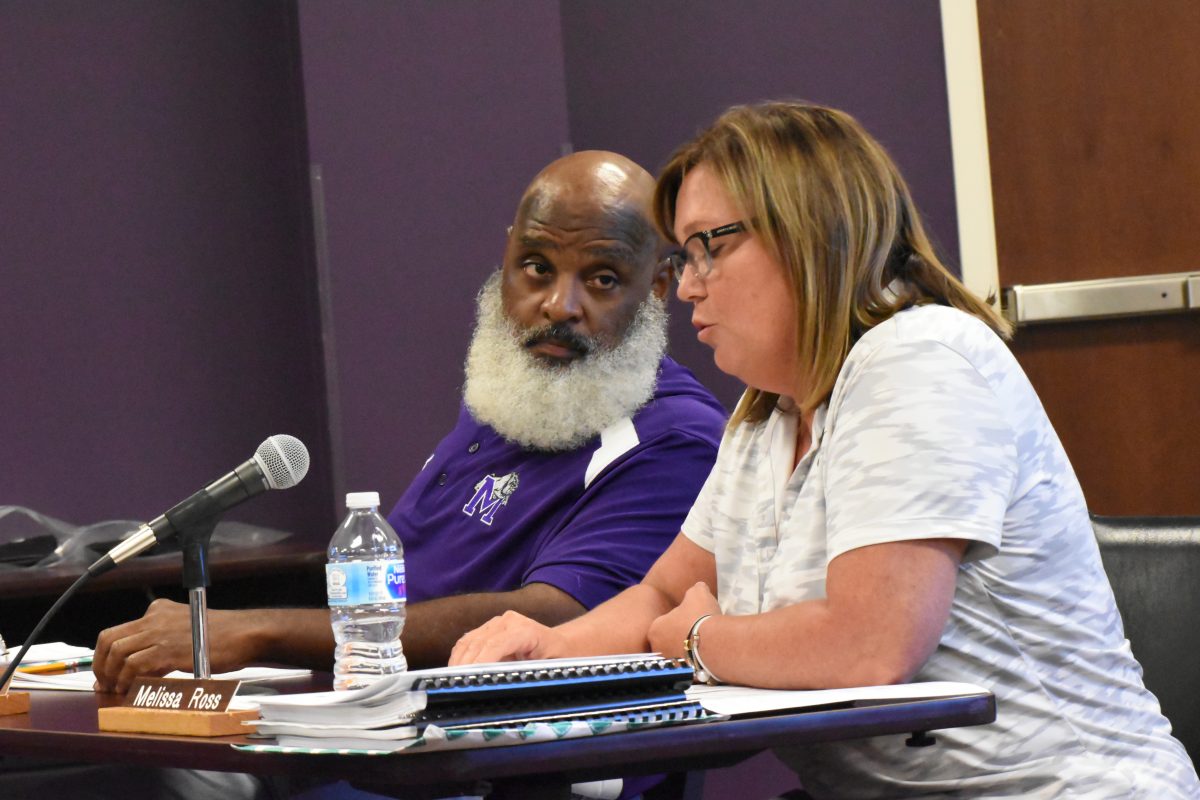 Board members Greg Horton and Missy Ross discuss the hiring of a Construction Manager for the upcoming renovation projects at Johnnie Hale Stadium and Milan High School.

“We made a hypothetical number. We said, ‘break it down into these areas, and show us what it’s going to cost the Milan Special School District for you to be a construction manager on an $18M project.’ We were trying to compare everyone along the same lines, so yes, there will be discrepancies as the different contractors are charging different things for the different line items.”
The report included several line items, totaled to give the board a hypothetical dollar figure from each of the firms based on an $18M project. The lowest total came from Rhino Construction, with an estimated cost of $1,046,250. The projected cost for Lashlee-Rich came in at $1,219,677.67. Forcum Lannom ranked third in cost with an estimated total of $1,269,251.82, and Henson Construction ranked fourth with a total of $1,316,219.60. Construction Manager fees for the hypothetical $18M project were, from lowest to highest, Forcum Lannom – $481,752, Rhino Construction – $607,950, Lashlee-Rich – $613,983 and Henson Construction – $775,120.
The difference between the lowest bid (Rhino) and the second lowest bid (Lashlee-Rich) was $173,427.67.
Director of Schools Jonathan Criswell explained that while the numbers were not concrete, they were based on percentages sent to the board by the firms, and that Petty’s estimations were clarified with the firms.
Some firms did not charge for certain aspects of the job, while other costs were included in either the bid package or covered by the construction manager fees. Board member Becky Fisher pointed out that some line items were left blank with no explanation as to why a projected cost was not included.
Fisher pointed out that Rhino had no dollar figure or explanation for Field Office Cost, Temporary Utilities or Other Job Site Personnel. Other fields left blank included Erosion Control, Storm Water Pollution Prevention Plan (SWPPP) installation and SWPPP Maintenance/Inspections.
“My question is, if there’s nothing there, do we assume as a board that that is included in the fee of the construction manager?” Fisher posited. “Because that could turn out to be a significant amount of money. How do we know how to take that?”
Henson Construction and Lashlee-Rich also had fields left blank in the report. Forcum Lannom did not. A representative from Rhino Construction was in attendance at the meeting, but the board did not seek clarification from them on the line items in question.
Board member Greg Horton noted that basing the vote on a hypothetical situation was somewhat unfair to the firms.
“I think you have to look at their price, look at their history, look at their portfolio,” Horton said. “You’re kind of getting into over-thinking. Depending on the project, sometimes the profit margin is going to suffer.” Horton added that he felt the board was not legally obligated to go with the lowest bid, and should take other factors into consideration.
“It’s not necessarily based on the lowest bid. It’s based on who you think is going to give you a quality job, who’s going to be effective and efficient,” he said. “The firm has a responsibility to try to make a profit. At the same time, we have a set price.” Horton suggested that board members should call the firms and ask their questions directly to gain a better understanding of the situation.
A motion was made by Sid Crocker to begin contract negotiations with Rhino Construction, and Fisher requested that the motion include the stipulation that the Rhino Construction explain the potential charges left blank in the report and that any additional costs left unlisted would be absorbed into the construction manager’s fee. The amendment passed 4-1 with board members Lett and Horton abstaining, but Crocker’s motion failed 2-2 with Lett, Horton and Fisher abstaining. Board members Missy Ross and Stacy Hensley voted no, Sid Crocker and Will Ownby voted yes.
After determining their method of voting, Ross made a motion that the board vote for their top two choices for construction manager, and have representatives from the firms chosen return for another meeting with the board. The board’s final vote broke down as follows:
Rhino Construction – 4 no, 2 yes, one abstaining.
Forcum Lannom – 6 yes, 1 no.
Lashlee-Rich – 5 yes, 2 no.
Henson Construction – 7 no.
The board will hold a special called meeting with a tentative date of Thursday, October 3, at 5:00 p.m. to further discuss the construction manager contracts.