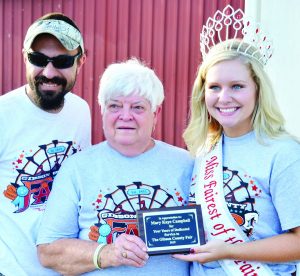 The Gibson County Fair Association kicked off the week by honoring two longtime volunteers, four Century Farms and the City of Dyer at opening ceremonies Aug. 26 in Trenton.

Zach Marbrey, president of the fair association, served as emcee and thanked all of the businesses and individuals that sponsored this year’s fair. He also announced the volunteers of the year – Mary Kaye Campbell and Travis Landrum. Marbrey said both are always willing to lend hand at the fairgrounds.

Miss Gibson County Fairest of the Fair Haley Beth Hill presented plaques to the volunteers as well as representatives of this year’s crop of Century Farms. The Tennessee Century Farms Program honors the dedication and contributions of families who have owned and farmed the same land for at least 100 years. 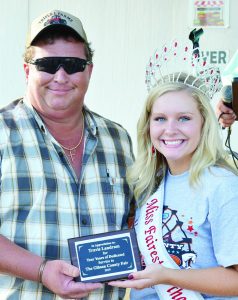 LANDRUM RECOGNIZED – Miss Fairest of the Fair Haley Beth Hill presents Travis Landrum with a plaque during opening ceremonies Aug. 26. The fair board honored Landrum for his years of service.

Griffin-Ketcham Farm was established in 1905 by Patti Ketcham Taylor’s great-grandfather Griffin. He had 300 acres, which he divided between two sons and one daughter, Altie Griffin Ketcham and husband Omar. They passed the farm down to their son Charlie Ketcham. Patti Taylor currently owns the farm, which produces cotton, soybeans and bell pepper and has cows and horses.

GRIFFIN-KETCHAM FARM – Patti Ketcham Taylor (with plaque) and her husband Tim Taylor (right) are the current owners of Griffin-Ketcham Farm, one of four Century Farms recognized during opening ceremonies of the Gibson County Fair last week.

Just a few years before the end of the 19th Century, R.W. Thornton purchased 10 acres of land for $150. When acquired in 1894, the land surrounding the tract was primarily farms. Part of the property now lies within the city limits of Dyer. 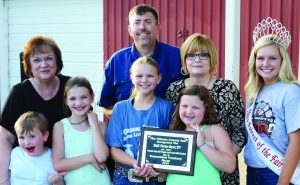 Thornton and his wife A.J. had one daughter, Nannie Lee. The family raised cotton, hay and vegetables. They built two houses around 1909 on High Street. Nannie Lee and her husband John Elly Hall acquired one of the houses in 1919 before purchasing the farm in 1926. Under their ownership, the farm grew to a total of 70 acres, and the couple, along with their children James Garland and Roberta, added corn to their crops.

Currently, two generations live on the farm where one of the two houses built in 1909 is home to Terry and Carole Hall Denton. 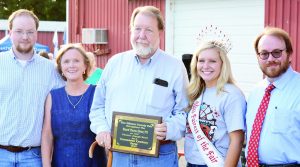 REED FARM was one of four Century Farms recognized during opening ceremonies of the Gibson County Fair last week. Pictured are fourth-generation owners Joe and Natalie Reed with their children are Nathan and Samuel Reed and Miss Fairest of the Fair Haley Beth Hill.

Samuel Pleasant Reed and his wife Rachel S. Norman Reed established Reed Farm in the 21st district of Gibson County, 1.5 miles south of Dyer, in 1885. They raised wheat, corn, cotton and nine children who made significant contributions to the community through their professions.

In 1908, John Lafayette (Fate) Reed, one of their sons, acquired the farm. John and his wife Carrie Elmo Smalley Reed and their three children cultivated wheat, corn, cotton and soybeans and raised hogs and cattle. Like many rural families during the 1930s and 1940s, the family experienced a dramatic change in their lives as a result of the Rural Electrification Administration, which brought electricity to rural areas. By having electricity, the Reeds could purchase some modern amenities.

During World War II, the couple’s son, John Smalley Reed, served as an Air Force pilot. In 1978, another Reed son, Robert Samuel, became the owner of the land. In 2017, Joe and Natalie Reed became the fourth-generation owners. Their children are Nathan and Samuel Reed. 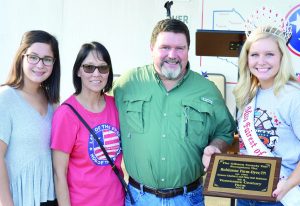 W.L. Holt founded the Robinson Farm just south of Dyer in 1894. He and his wife Martha Holt had two children, W.L. Holt Jr. and J.A. The family raised cotton, strawberries, corn, cattle, grass seed and horses on their 81 acres.

In 1905, W.L. Holt Jr. and J.A., whose wife was Fannie, became owners of the farm. Family history records that in 1926, the house that Fannie and J.A. lived in was moved to the new US Hwy. 45W. The house was moved by mules and tied down to trees to keep it from running down the hill. The house was remodeled after the move and was home to the family, which included W.C., known as Carl, Louise and Holland. The Civilian Conservation Corps did terracing work on the farm and planted trees during the 1930s.

Third-generation owners were Louise Holt Smith Walker and Carl Holt. Louise had two children, John Holt Smith and Linda Smith. Carl and his wife Sadie McKinnon had two children, Patty Holt Robinson and Betty Holt Redmond. In addition to his farming duties, Carl taught in the Gibson County school system and served as soil conservationist with the Gibson County Soil Conservation District in 1941. He was an elected magistrate from the 21st District for 18 years and was Gibson County highway engineer from 1965 to 1971. Sadie taught in the Gibson County school system for 25 years. She and Carl were active members of First Baptist Church in Dyer.

In 1978, Patty Holt Robinson and her husband Charles acquired the farm. Charles and Patty work and manage the farm where they raise corn, wheat, soybeans, timber and hay. The couple also has a two-acre English garden on the farm that was inspired by their visit to England in 1986. The garden has many perennials, including phlox, daylilies, daisies and roses. Charles, who owns and operates Trenton Industrial Laundry, built trellises, arbors, pergolas and running streams through the garden.

The City of Dyer received this year’s special group recognition. Mayor Chris Younger and several other officials were on hand to receive a plaque. There was also a special display located in the Martha Taylor Exhibit Building noting the contributions Dyer has made to the Gibson County community.