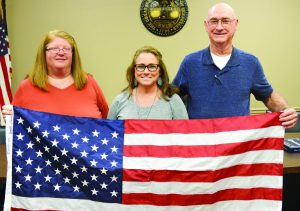 At the Aug. 19 Rutherford city board meeting, Mayor Sandy Simpson and Davy Days volunteers Lynn Greene and Barbara Hunt said requiring vendors to have insurance policies has hurt participation. Greene said the annual festival used to draw 45 to 50 vendors, but last year only around 20 came.

“I’ve heard from several vendors, and that was their No. 1 gripe,” Alderman Danny Parker said.

Hunt provided copies of a letter from the Tennessee Municipal League (TML) to board members. TML recommended vendors without insurance obtain a two-day policy for $39. Hunt said that several vendors such as churches and schools that set up at Davy Days have their own insurance.

Hunt said she understood leaders’ concern with requiring insurance because many vendors don’t make enough to cover the $15 space rental fee and $39 policy.

“I understand because I’ve had the same conversations y’all have had,” she said. “I don’t know the answer. I know the insurance company’s answer, and you have it.”

After a lengthy discussion regarding the city’s responsibility and liability should there be an accident, Chad Brown of Republic Services offered to donate $1,000 to cover vendors’ insurance.

“We like to find ways to give back,” Brown said.

Republic currently has the city’s waste management contract, which the board agreed to extend five years without going to bid. The new contract includes a 2% increase that Brown said covered inflation. There is no fuel charge on the contract, he said.

Brown said Republic would also double the amount of roll-offs it brings for the city’s annual fall and spring cleanup days and would provide trashcans for Davy Days at no extra charge.

Rutherford Police Chief Adam Branch agreed to match Republic’s donation with money from the department’s LESO account. LESO is a federal program that allows transfer of excess Department of Defense property that might otherwise be destroyed to law enforcement agencies across the country. After a certain amount of time, agencies are allowed to sell the equipment and use the profits in specific ways.

Branch said the rules would allow him to donate $1,000 for vendors’ insurance from the LESO account. It is not taxpayer money, leaders stressed.

Bid approval – The board approved a $15,666.61 bid from GNC to purchase a sewer camera the Water/Sewer Department can use to inspect pipes and find areas in need of repair.

AMI water meter system – The board voted 4-0, with Alderman James Roach passing, to rebid for Advanced Metering Infrastructure (AMI) water meters, which allow residential and business water meters to be read remotely via a regular radio transmission sent directly from each individual meter.

The city had previously let bids for AMI and Automated Meter Readers (AMR) and approved a bid for the AMR system. Parker and Water/Sewer Superintendent Eddie Watkins revisited the issue later, asking the board to consider AMI. A representative from Zenner spoke to the board last week, saying the benefit of AMI meters to the community is “striking.”

With AMI meters, water leaks can be detected within hours, saving homeowners money on their bills.

Simpson said the city’s Municipal Task Advisory Service (MTAS) representative and MTAS attorney advised that Rutherford would need to bid out AMI water meters only to comply with the law.

ServLine – The board unanimously voted to offer water customers an optional, $500 ServLine policy at a rate of $1.30 per month. ServLine is a full-service customer leak solution that pays for high water bills caused by customer leaks by insuring the utility department. ServLine administers the leak protection program and handles claims, payment and customer service.

Kirk Smith, a Tennessee Association of Utility Districts (TAUD) representative for ServLine recommended the city take about 90 days to roll out the program. ServLine handles all the marketing to educate customers at no cost to the city, he said.

Kellwood building – Simpson updated the board on the late Steve McCartney’s bid to buy the Kellwood property for $200 and clean up and haul all debris. Simpson read the bid in June and said she would speak to him about purchasing the structure but not the land.

McCartney passed away unexpectedly, and his son is taking over the business, Simpson said. He was partners with his dad but told Simpson he was unfamiliar with how his father determined bids, she said. He planned to look at the building last week and get back with Simpson.

The mayor also said that the younger McCartney had agreed to take down a house on Main Street that has been overrun by foxes for $5,000 and the trees on the property for $400.