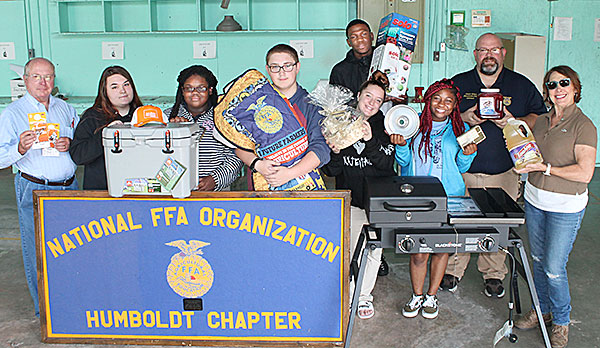 FFA AUCTION ITEMS – FFA alumnus and students display a few of the items that will be on the auction block at the annual FFA Auction and BBQ. The auction will be held at Bailey Park on Saturday, August 24. The silent auction begins at 9 a.m., followed by the live auction at 10 a.m. Barbecue plates will be ready at 11 a.m. Those displaying auction items are (from left) former FFA instructor and alumni Thomas Raines, students Hope Choate, Crystasia Standifer, Ty Gilman, Lamar Wade (in back), Alisha Long and Laquera Wilson, and FFA advisor Jason Wiles and alumni Christine Warrington.

Who doesn’t like to find bargains these days? Everyone wants to find good deals. How would you like to find these good deals while helping out local students?

If so, the annual Humboldt FFA Alumni Auction and BBQ is the place to be Saturday. Once again, Bailey Park is the location.

Jason Wiles, FFA advisor at Humboldt Jr./Sr. High School, invites everyone out to the auction and BBQ. Wiles said last Tuesday, there are upwards of 40-plus items on the auction block this year. Even more are expected to come in between then and auction day. Wiles said they will accept donated auction items all the way up to Friday before lunch.

As an added bonus, FFA will pre-sell BBQ plates and will offer delivery within the Humboldt city limits.

Gary Williams will be the auctioneer.

Proceeds from the auction and BBQ go toward sending Humboldt students to the National FFA Convention and Expo held this year in Indianapolis, Ind. on October 30 through November 2.

For more information about the FFA Auction and BBQ, to donate auction items or to pre-order barbecue plates, contact Wiles at wilesjw01@gmail.com.