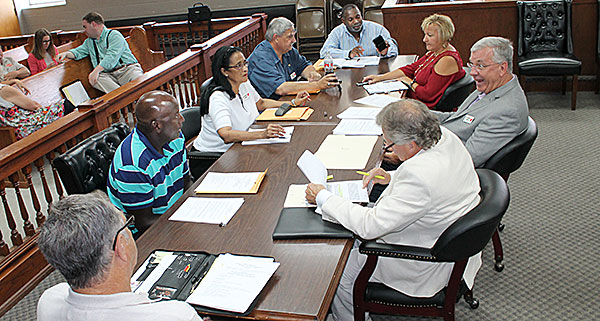 FRIENDLY CONVERSATION – Prior the last week’s Humboldt City Board meeting, board members have some friendly discussions before calling the meeting to order. Mayor Marvin Sikes is happily animated as he tells one of his many tails. Board members and staff are (from lower left, clockwise) Aldermen Don Graves, James Shivers, Donna Johnson, Bob Pruett and Leon McNeal, city hall secretary Cindy Knott, Mayor Sikes and city attorney Randy Camp.

For a second time in three weeks, a Humboldt business has been denied a beer permit. The owners/partnerships of Q-Mart/Valero located at 2990 East End Drive had twice submitted beer applications but were turned down.

During the Humboldt Board of Mayor and Aldermen meeting on Monday, August 12, Ezzat Hannah, one of the store’s owners who applied for the beer permit, attended the meeting.

Humboldt Police Chief Reynard Buchanan addressed the board regarding the permit application. Board members also had a letter in their packets from Chief Buchanan with his recommendation.

In the letter, the chief stated the beer application was incomplete and did not specify if it was to sell beer for carryout only, on-site consumption or other. Chief Buchanan did note that the location is in compliance with the laws of the city of Humboldt and state of Tennessee for carryout only beer sales.

At the July 22 city board meeting, Samwail Nasr had applied for a beer permit for the same location. That request was rejected due to Nasr being charged with selling beer to a minor at a Jackson, Tenn. location where Nasr’s permit was revoked for 30 days.

Now, with Hannah applying for a beer permit, he listed Nasr as a partner of the business. Also in application, Hannah listed Amr Shalaby as a reference. In a notarized statement from Shalaby, he did not list the county in which he resides. Chief Buchanan was unable to verify Shalaby’s address through a drivers license check.

Buchanan spoke to Shalaby, who said he lived in Jackson and does not have a driver’s license. He did not have any documentation that he did indeed live in Jackson. Due to his findings, Buchanan said he questioned if Shalaby was a resident citizen of a county in Tennessee.

With all his findings, Chief Buchanan recommended the board not approve a beer permit for Hannah.

“I have to stand with the chief and not approve,” Alderman Don Graves voiced his opinion.

Mayor Marvin Sikes asked Hannah to address the board. Hannah had a compelling statement to the board as to why they should grant him a beer permit.

“I want this business to be very nice and good for the community,” Hannah said to the board. “I will be the one running the business. He (Nasr) was partner of one of my other businesses. We are all subject to inspections. He does have one offense. It is not fair to hold this over him for life. I want to run an honest business. We have been partners from the beginning, not just to come in to get a beer permit. Why punish me for my partner’s mistake?”

Alderlady Donna Johnson reminded the board that during the last meeting when Nasr’s beer permit was denied, the board asked Nasr if there was someone else in the business that may request a permit.

The board ultimately agreed to accept Chief Buchanan’s recommendation to not approve the beer permit for Hannah. It was not discussed if another person from the business could perhaps qualify to hold the beer license.

•Daphne Prather, specialist with the U.S. Census Bureau, addressed the board regarding the upcoming census.

Mayor Sikes expressed the importance of the census and how it affects the city. The mayor said he and city treasurer, Kim Hadley, use those numbers all the time.

“This 8,500 (current citizens of Humboldt according to the most recent census) needs to be more,” Mayor Sikes said. “This new census will be good through 2030.”

Prather explained the importance of getting an accurate census count. She said a census is taken every 10 years and was first started by President George Washington in 1790.

Prather said there will be $650-billion disbursed after the new census it taken.

“Everything is confidential—records are kept for 72 years,” Prather told the board. “Information is not shared with police departments. Workers are under oath.”

Prather said the census could be filled out online this year, making it much easier. She said there are 10 basic questions about the household such as who is the head of household, number of people living at the address and their ages. Prather said census cards will be sent out soon with all the information needed to fill out an accurate census.

She also noted that not everyone has access to a computer. For those, there is a questionnaire done by phone. After the online and phone census are completed, the next step is to have a census worker knock on the doors of addresses not in the system.

Prather said there is no reason not to fill out a census form. But to assist the process, Prather asked the mayor and board to form a CCC (complete count committee) to assist gathering census information. Training should take place prior to September 12, Prather said.

•Mayor Sikes recommended the appointment of Julie Crenshaw to the Airport Committee to replace John Morrison, which was approved.

•The mayor also recommended Dr. Gina Dieudonne be appointed to the Park Advisory Board to replace Leanne Brittain. She was also approved.