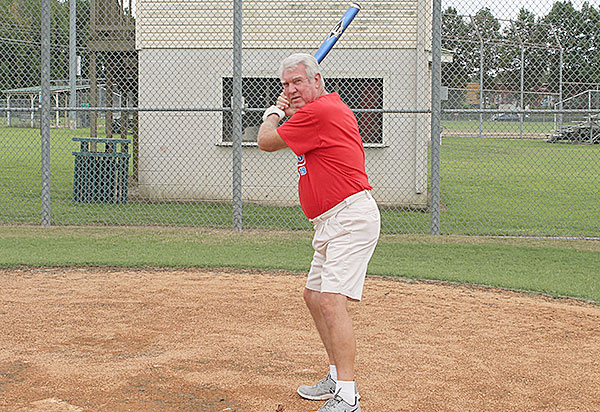 BATTER UP – Herman Newell is still swinging for the fences with his summer league senior softball team. Newell and his teammates recently won the championship in their age bracket in Jackson. He proudly sported his championship shirt Friday afternoon at the ball park. He plans to continue his hobby and passion for years to come.

If you have ever been around a ball field, then you must know or heard of Herman Newell. At 76 years young, Newell is still playing softball for a senior league in Jackson.

His team, Denton’s Carpet One, recently won the championship in their age bracket. Newell said his team was marked the underdog this season. But they ended the season with a 7-4 win, one more win over the team everyone thought would win.

“I play ball to keep me healthy and active,” said Newell. “Every morning I sit up on the side of the bed to see what’s not going to work today. I’ve been blessed to be able to play ball all the way from little league to current date without any injuries.”

Newell plays third baseman on his team and still plays with the same glove he calls “Super Big Daddy” that he got 32 years ago. He’s had a few repairs to it over the years but it still serves its purpose. Newell ended the season with a batting record of 33 for 37.

The Jackson senior league has nine teams with three age groups at The Ball Park. Age groups are 50 to 59, 60 to 69 and 70 and up. The oldest player on Denton’s Carpet One team is 82 years old and plays in the outfield.

Newell was born and raised right here in Humboldt. He has been playing some type of baseball/softball since little league. But his passion is playing softball.

Newell started playing softball in 1966 when he joined his first men’s softball team while working for Alton Box.  Back then, teams played on NCR field with wooden bats and Wilson softballs. In 1967, a league formed in Humboldt where he continued to play league softball for various teams. One of the teams he mentioned playing for was H&R Plumbing (now Heglar Plumbing), as well as a Liberty Hall church league out of Gadsden.

In the mid 70s, teams all graduated to aluminum bats and blue dot worth balls. Newell played many positions throughout his 53 years of softball. He was pitcher for 25 years but later moved to first base, third base and shortstop. All teams eventually stopped playing at NCR field when the new softball fields were built at Spangler Park. As time passed, most of the Humboldt teams diminished and Newell eventually started playing in Jackson leagues.

In 1974, he met the woman he now calls his wife, Pat. Her brother, Jimmy Moore, also played league ball with Newell. Moore brought his sister and niece, Cindy, to watch him play softball.

“At the time, I thought Pat was Jimmy’s wife because I did not know otherwise,” stated Newell.

But soon after, Herman and Pat married and have been together for 42 years. Pat has not missed a single game he has played in their 42 years of marriage.

“I probably don’t thank my wife enough for supporting me, and going with me all these years but I’m glad she is always in the stands,” Newell said.

In 1990, the team Newell was playing for participated in 175 league games and tournaments from the first of April until the end of August. “That is more games than most major league teams play in a season,” Newell said.

Teams use to play Friday and Saturday night and if your team won those games, we would play again on Sunday after church.
Newell has some great memories when it comes to softball. The longest ball he has ever hit was 340 feet, dead center of the softball field. His best tournament at the plate was in Paris for a cancer benefit where he went 23 for 25.

Newell now has four generations of family that has played or is currently playing. His daughter, Denise, started playing league ball when she was 10 and continued all the way through high school. Both of his grandsons play some form of sports.

Matt played football and basketball and Chandler played baseball and football. Now he has a great-grandson, Landon, that is playing little league in Milan.

Newell has watched things grow and change over the years with softball but one thing remains, his love for the game.

If you would like to join the senior league in Jackson, you can contact Herman Newell at 784-6845.