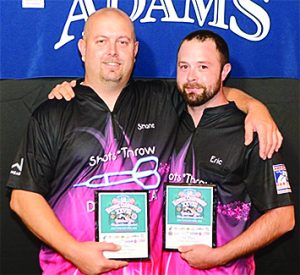 What started as a bet quickly bloomed into a passion for a Dyer man.

“I expected to just play,” Freeman said. “I didn’t know I could make it all the way to the top.”

What Freeman lacks in experience, he makes up for in natural talent. He’s only been throwing darts competitively for three years. The story goes that he had lost a card game and challenged his opponent, a professional darter, to a game of darts. Freeman won.

Freeman was quickly drafted for a team in the Jackson Darts League and was named MVP in his first session. Sessions last 10 weeks. His team won the league championship that year.

“I didn’t really work to get there,” Freeman said.

But when the bug to compete at a high level bit, Freeman devoted himself to the game. During those first days in the Jackson Darts League, his teammates coached him through every game. He would go home and read up on the rules and watch videos of professionals.

“I was basically mimicking what I saw on TV,” Freeman said.

He competed in the ADA National Championship in St. Louis two years ago. Last year, he wasn’t able to take off work to go to Pittsburg. When he saw that this year’s event would be held at Graceland in Memphis, Freeman couldn’t pass on the opportunity to compete so close to home.

An ADA area representative paired Freeman and Meeks about a year ago, and the duo competed at regionals.

“The stars aligned,” Freeman said. “When we met, it was like instant best friends. We were cutting up, having fun.”

They kept in touch, but Freeman and Meeks didn’t see each other again until meeting up at Graceland at the end of July. Their division was the biggest event there.

The ADA National Championship is open to all members, so it draws competitors from across the country. Some are the professionals Freeman has watched on TV.

The double-elimination tournament was the best of five in every round. Cricket is played with the bullseye. The object is to close the numbers in play (15, 16, 17, 18, 19, 20 and the bullseye) in any order before your opponents. The team that closes all numbers and the bullseye first, and has a greater or equal point score, wins.

Freeman and Meeks won 36 of 48 games and were the last undefeated team in the winners’ bracket, which put them in the king’s seat for the finals. Freeman said most of the games went six or seven rounds.

Freeman said he was fine for the first two games of the finals. In the last game with his team well ahead, Freeman’s nerves kicked in.

“We needed a bullseye to win,” Freeman said. “I never miss a bullseye.”

From 7’9.25” and with three darts in his hands, Freeman missed the first but nailed his second throw.

Freeman was excited and exhausted. During the four-day tournament, he and Meeks started throwing darts at 9 a.m. and didn’t return to their hotel until midnight each day.

“It’s a team effort,” Freeman said. “You hope you jive well together and pick each other up.”

Growing up, Freeman ran cross country and played soccer. He said hand-eye coordination was never his forte, but he does believe those sports helped him develop the endurance needed to compete in darts tournaments.

As for his mechanics, Freeman said his philosophy is the less moving parts, the less can go wrong. He said as long as he takes aim and keeps his mind right, he’s able to perform consistently and excel under pressure.

He practices with steel tip darts on a board at home and practices against competition using an internet board. With the board, he’s able to call up opponents from all over the world. Each internet board utilizes three cameras so that opponents can watch each other throw. There are even international tournaments played online.

Darts has opened up new worlds for Freeman, who admits he’s a homebody.

Last year, Freeman competed as a member of Team USA against England in a steel tip competition the Americans won.

Freeman is the son of Joe and Jean Freeman of Dyer. He and his wife Crystal have a daughter Kaylee, age 4. Freeman said he’s already started to work with Kaylee, but she’s not quite ready to throw darts with dad.

Freeman will turn pro on Jan. 1 and already has two sponsors.