The city of Humboldt has a new attorney. Randy Camp is the new city attorney after the city board approved Mayor Marvin Sikes’ recommendation. 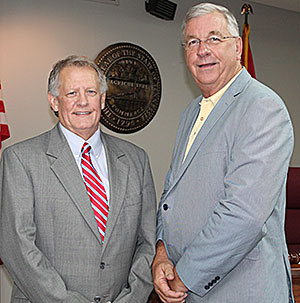 NEW CITY ATTORNEY – Randy Camp (left) was recently hired as the city of Humboldt attorney. Camp, who resides in Crockett County, brings an impressive resume of legal professional experience to Humboldt and the city board. He also serves as attorney for Crockett County, and the towns of Alamo and Gadsden. Humboldt Mayor Marvin Sikes (right) recommended Camp to be city attorney and was approved by the city board earlier this month.

The position had been vacant for several weeks after former city attorney, Terri Crider, accepted a new position with a Jackson law firm. Crider resigned as city attorney at that time.

“I wanted to make sure I find the right person for the job,” Humboldt Mayor Marvin Sikes said during a recent city board meeting regarding the city attorney. “I have a couple of people in mind.”

One of those attorneys was Camp, who was hired during the June 24 city board meeting.

A native of Crockett County, Camp brings an impressive resume to the city as the attorney. He has owned private businesses and held consulting positions. He also ran political campaigns over the years.

“I heard Crider had resigned so I called Valerie (Hayes) and said if the city is looking for anyone outside of Humboldt, I would be interested,” Camp said of his interest of becoming Humboldt’s attorney. “I didn’t know if I would be considered since most towns want to hire an attorney from their city. She told the mayor and he gave me a call.”

“I want the best person I can get—someone who knows municipal law,” Sikes noted.

After Mayor Sikes had selected Camp as his top selection, he talked it over with his staff and department heads and asked their opinions as well. He said his staff thought Camp would be a good fit.

As city attorney, Camp says one of his main jobs will be keeping the mayor and board apprised of new laws coming down from the state and federal levels. New laws can impact cities, their ordinances and how they do business.

Camp also serves as Crockett County’s attorney and is city attorney for Alamo and Gadsden. He is an attorney for Gibson Electric Membership Corporation as well.

He attended Alamo schools until his high school days when the family moved. Camp graduated from Crockett Mills High School in 1970. He laughed saying there were 17 kids in his class. After high school, Camp went to work for Federal Chemical, a fertilizer plant in Humboldt next to the gin. He worked spring and summer at the plant and attended UT Martin during the fall and winter quarters.

In 1975, Camp earned his bachelor of science from UTM, majoring in criminal justice with minors in history and in political science.

Camp moved to Washington D.C. after graduating but moved back to West Tennessee to run Congressman Ed Jones’ campaign. After that, Camp was campaign manager for President Jimmy Carter, in charge of the West Tennessee office.

Camp continued his education at Memphis State University School of Law and earned his Juris Doctor in May of 1980. He passed the bar exam in October. His first job as an attorney was with Emison & Emison P.C., a father/son law firm in Alamo.

Over the years, Camp has taken various jobs and positions including executive assistant to Lt. Governor John Wilder from 1984 through 1987. After that, Camp became an assistant district attorney for the 28th Judicial District, which covers Gibson, Crockett and Haywood counties.

From 1990 until 1998, Camp served as Crockett County General Sessions judge and juvenile judge, which he said was a part-time job. It was during this time that Camp ventured out as an entrepreneur as president and CEO of C&C Management Corp. In 1994, Camp became owner and operator of Southerland Farms and is still owner today of the 165 acre farm.

After the judgeship ended, Camp accepted the position of Commissioner of Claims for the state of Tennessee, a job he held for four years.

From 2003 through 2006, Camp served as commissioner for the Department of Personnel. From January through September of 2006, Camp was director of the Administrative Office of the Courts for the state of Tennessee.

Toward the end of 2006, Camp put his attorney suits back on and continued his law practice.

In 2008, Camp threw his hat in the ring and ran for state senator.

He also became a managing member of Wellness & Health LLC, a joint venture with Half Hill Farms in Woodbury, Tenn., which is a state licensed industrial hemp processor.

When Mayor Sikes was elected and sworn into office, he had to fill several key positions as the city’s new administrator.

“The first board meeting, I had to nominate an attorney, city judge, police chief, fire chief, public works, we had to appoint them all.” Mayor Sikes noted of having to appoint a new city attorney. “I think Randy will do a good job too. I look forward to working with him.

With all his involvement in law over the years, Camp has seen it all and will bring all his knowledge and experience to Humboldt as city attorney.