HORN LINE – The Music City Drum Corps horn line learn and rehearse their steps on the practice field. The group is using Humboldt Jr./Sr. High School for their practice site, as well as living quarters in the gymnasium for two weeks as they hone their show. The public is invited to attend a free performance this Saturday night.

Humboldt Jr/Sr High School has some very special guests on its campus. The Music City Drum Corps, a world-class marching/drum group out of Nashville, Tenn., arrived at the high school on May 26 and will be here until June 9.

The group is not only using the high school campus to practice for their competition season, they are also sleeping and eating there. If you were to take a stroll through the halls today, you would notice various cots and blowup mattresses situated throughout the school. You may also notice a food truck and canopies in the back of the building.

The drum corps is made up of 154 performers ranging in age from 15-21 and they also have around 50 parents and volunteers.

“It takes a village to get a 12-15 minute show on the floor,” said Sydney Williams, performer and head photographer.

Many of the performers have come from all over the country, 24 states to be exact. They also have one member from Puerto Rico.

These kids and young adults focus on brass, drums, percussion line, keyboard, and front ensemble. They also have around 30 colorguard members. Each section has three to five “caption heads” that help direct and lead their performances. 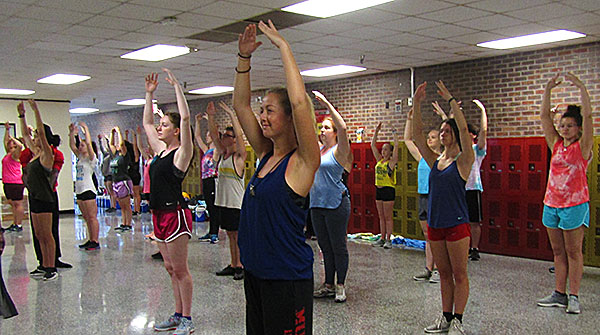 COLORGUARD – Around 30 color guard members of the Music City Drum Corps practice in the halls of the Humboldt Jr./Sr. High School. The group is using the Humboldt campus as their practice facilities as they prepare their show.

Each of the members began auditions for the Music City Drum Corps in November 2018 and will be preforming all across the East Coast until August. Over the summer, the drum corps will travel around 12,000 miles on charter buses, giving 23 performances between Texas and Buffalo, N.Y., but will mainly stay between Georgia and Pennsylvania.

After they leave Humboldt on June 9, they will begin their competition tour at Columbia High School in Middle Tennessee. Their show is called “Of Mice and Music” and it portrays the differences between a country mouse and a city mouse. During 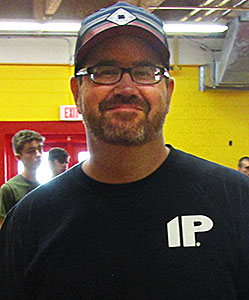 their competition tour, the performers plan to wear uniforms that have mouse-tails on the back to enhance their show. Their last show will be the World Championship on August 10 in Indianapolis, Ind.

Joe Roach is currently the head director of the Music City Drum Corps and has been with the drum corps for one year. Before moving to Nashville, Roach was the director of the Cavaliers Drum and Bugle Corps in Rosemont, Ill. for two years.

Roach would like to invite everyone to come to Community Night at the high school stadium on Saturday, June 8 at 7:30 p.m. Admittance is free. Roach also stated that the community is welcome to come to the stadium on weeknights to watch their nightly practices, pending the weather.

“We will be preforming here at the stadium for the community as a way to say thank you for letting us use your facilities,” said Roach. “We encourage everyone to come out and have a good time.”