In 2007, three local men purchased the downtown movie theater and began to bring it back to life. Now, in 2019, the Plaza is going through more renovations.

Michael Longmire, Jason Tubbs, and Jeff Brown purchased the downtown landmark and put lots of elbow grease into fixing it up. Later, Brown decided leave the partnership and sold his share to Longmire and Tubbs.

Over the years, Longmire and Tubbs have done several small and large renovations to modernize the Plaza. For example, in 2007 they made major improvements to the lobby and concession areas by painting and adding new carpet. In 2010, they renovated the entire upstairs theater and in 2013, they made the switch from film projectors to digital projectors. They also installed new screens, new sound systems and upgraded the seating in the two main floor theaters.

If you have been to the theater recently, you may have noticed that Longmire and Tubbs are back at it again. The lobby has recently been repainted and there are plans for new carpet. New custom built doors have been made for both of the downstairs theaters and the restrooms. The back counter in the concession area has been replaced and a subway tile backsplash has been installed. There are plans to replace the rest of the counters as well.

The upstairs seating has also been upgraded and several new pieces of concession equipment have been purchased. 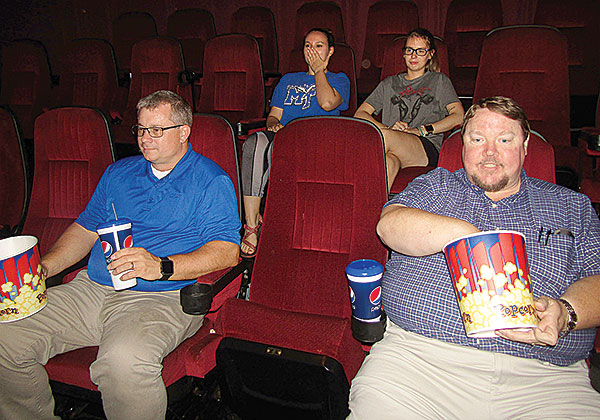 NEW SEATING – Humboldt Plaza 3 owners Michael Longmire and Jason Tubbs are having popcorn and drinks while kicking back in the new seats to watch a flick. They are joined by employees Danea Batterbee and Mary Tate. Over the past few weeks, the movie theater has ungone several renovations including the new seating in the upstairs theater.

“We are now offering a new brand of Hot Shot canned coffee that can be served hot or cold. We also have a new ice machine with the same great ice,” Tubbs said.

Tubbs and Longmire have also added 7.1-surround sound to theater 2 and have plans to install it in theaters 1 and 3. Not only that, but they have also added ADA compliant devices to the theaters for the hearing and visually impaired. The hearing impaired have the option of using headphones that amplify the sound or a reader that can sit in a cup holder. For the visually impaired, there are headphones that describe scenes and hear conversations.

“My wife and I love going to the Plaza in Humboldt,” one local patron said exiting the theater after watching a movie. “The staff is always so friendly. And you can’t beat their prices, both tickets and concessions. Jason and Michael have put their heart and soul into this theater and it shows.”

The Humboldt Plaza 3 invites everyone out to see the improvements to the theater. Both men are very thankful for their patrons, especially those very loyal customers that come out every week.

Be sure to look for the Plaza 3 Theater’s ad each week in the Humboldt Chronicle for movies and show times. Also visit their website, www.plazatheater.net for movie information, as well as the history of the Plaza Theater.